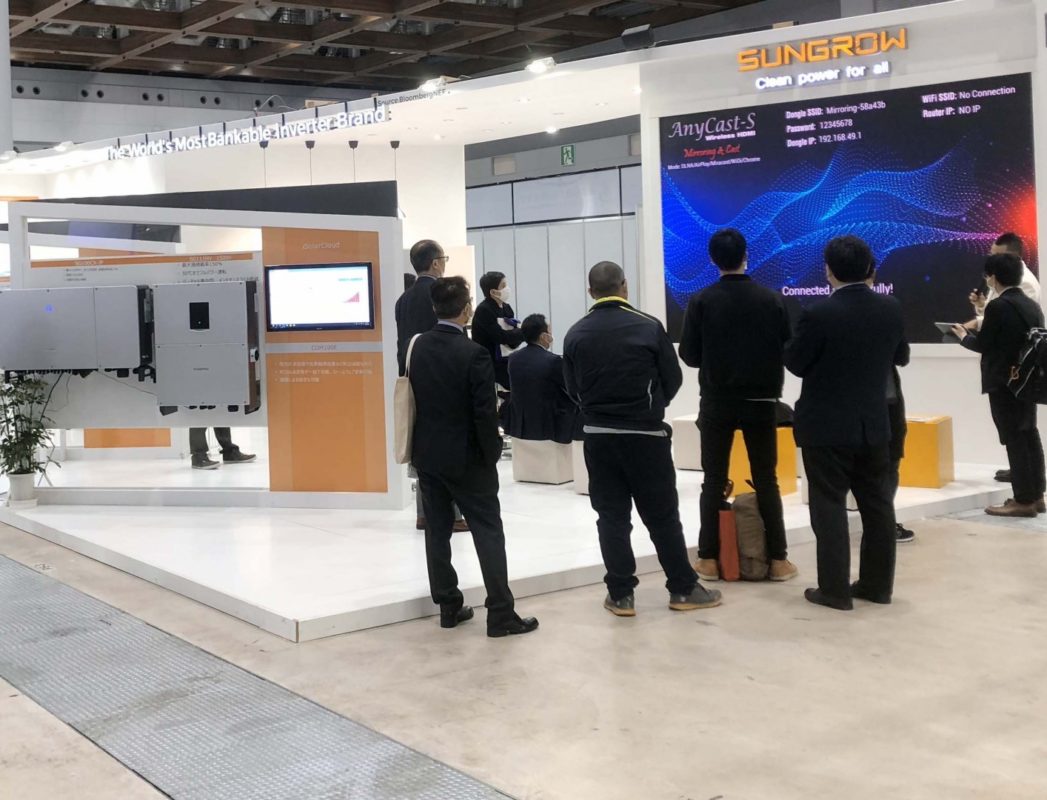 The China-headquartered inverter supplier is a leading player in markets including the US and its homeland, with over 100GW deployed worldwide. It is also a manufacturer of stationary energy storage systems (ESS) and has a joint venture (JV) for ESS activities with battery company Samsung SDI.

Sungrow announced that the deal with YUASA (not to be confused with GS Yuasa, the maker of batteries including prismatic lithium-ion, also headquartered in Japan), is a partnership that will “distribute comprehensive PV and energy storage solutions across Japan”. It was announced during World Smart Energy Week, which took place in Tokyo last week, and incorporated related exposition events including PV Expo and the International Smart Grid Expo.

Japan’s solar energy market is changing to strongly favour more distributed solar PV power plants, including small-scale ground mount and, increasingly, rooftop solar power plants for both homes and businesses. It marks a significant change both from the feed-in tariff (FiT) policy-driven business model that was introduced between 2012 and 2013 and also from the many ‘mega-solar’ (1MW+) large-scale power plant development model that this opportunity created.

“We are more than delighted to partner with YUASA to better serve the local customers in this market of huge potential,” Sungrow Japan country manager Sun Xiao said.

Indeed, the feed-in tariff still exists for the 2020 financial year, which begins in April, albeit at reduced rate. Solar power plants over 250kW however, will have to bid to compete in auctions to determine the prices their output will receive for selling into the grid.

With this changing market landscape and conditions found in Japan’s varied terrains and climatic conditions in mind, Sungrow exhibited a commercial inverter solution, the SG100CX-JP, a 1000V device equipped with 12 MPPTs (maximum power point trackers). Compatible with bifacial modules – another key feature of Japan’s expected market dynamic due to limited land area for generation – it is also “resilient to harsh conditions”, Sungrow said. It also has built-in potential-induced degradation (PID) recovery as a function, which the company claimed can “maintain unprecedented yields for solar plants”.

The 100MW deal with YUASA will also see Sungrow marketing both AC-coupled and DC-coupled energy storage solutions into Japan. While ESS for ancillary grid services are not widely used in Japan as in other territories, they are increasingly being deployed to both integrate renewable energy into the grid and, more pertinently, as backup power systems that can help the country ride out typhoons and earthquakes.

Solar PV systems in Japan are increasingly likely to be aimed at enabling self-consumption of energy onsite rather than being sold to the grid. The commercial and industrial (C&I) energy storage systems, which come in containerised solutions, also offer customers an important potential economic case, as they offer peak shaving functions as well as “guaranteeing 24 hours of continuous power yields”, Sungrow said. The company has already deployed more than 50MWh of ESS solutions in Japan.

Many of YUASA’s core businesses are currently centred around supply of technologies and services to fossil fuel industries, although a spokesperson said that the deal with Sungrow is a “landmark cooperation for us to communicate closely to provide competitive solutions based on local needs in Japan”.

The deal kicks off with the supply of what is claimed to be Australia’s first community owned battery system, a 137kWh solution for a minigrid in the town of Yackandandah. It’s part of an industry-community partnership that is looking to help volunteer community group, Totally Renewable Yackandandah (TRY), take the town 100% renewable energy-powered by 2022.

Mondo claims the solution can be replicated in many places across Australia. Combining Mondo’s energy monitoring and management hardware including smart metering with Sungrow’s equipment including hybrid solar and storage inverters, “makes possible a future where local energy sharing means communities have 100% renewable, 100% resilient and 100% locally-sourced power”, the Australian company said.