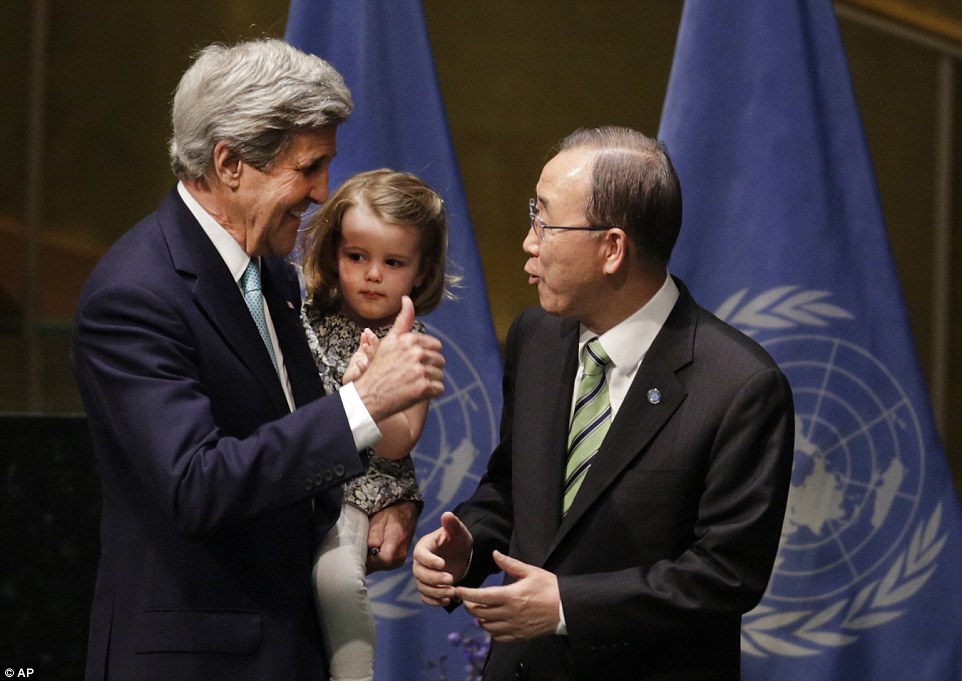 On Friday in New York, the historic UN global climate agreement was officially signed by a host of world leaders, signifying the unified global effort to tackle on of the world’s most insurmountable environmental and economic issues.

Last year, at the COP21 summit in Paris, over 190 nations aligned their climate change incentives, pledging to keep a global temperature rise this century to “well below” 2 degrees Celsius and to drive efforts to limit the temperature increase even further to 1.5 degrees Celsius above pre-industrial levels. In addition, the agreement underwrites support to developing countries and established a global goal to significantly strengthen adaptation to climate change through international cooperation, transparency and support.

Four months later, over 160 countries stood poised to ink the agreement to solidify their efforts to decarbonise their economies and translate the hopeful “spirit of Paris” into purposeful action. Offering a more concrete plan of action, the signing of the agreement is indicative of a country giving political support in conjunction with its domestic policies. For some, this will mean new legislation. Closer inspection of the agreement’s promises to work to keeping temperature rises below 2 degrees Celsius reveals that far more will be required than cuts in carbon emissions.

In fact, the recommitment to the goodwill displayed at Paris should put more pressure on clean energy movements around the world; solar energy being one of them, with its undoubtable role in making good on the ambitious targets, which include racking-up US$100 million in climate finance annually by 2020. Some even cite the tremendous progress in solar and wind technologies as one of the key reasons why an agreement was reached in Paris in the first place, after failed attempts to consolidate a deal in Copenhagen in 2009.

Signatures won’t save the climate

While many believe the signing of the agreement creates an opportune moment for solar to become the leading source of electricity in the world by the near future, mere signatures won’t save the climate, according to Solar Power Europe’s CEO James Watson:

“It’s an important thing of course with over 160 countries signing the Paris agreement and giving their commitment to reducing greenhouse gas (GHG) emissions and essentially trying to combat climate change effectively. We have to welcome that, it’s a good step in the right direction, but for me, it’s just the beginning. Now we really have to go into the situation where we have to build an energy system in Europe and across the world which reflects the ambitions of the Paris agreement.”

Europe is significantly lagging behind the rest of the world in terms of its solar progress.

“Other countries are seeing the value of solar and the fact that it’s become relatively cheap – it’s very competitive. In parts of India you’ve got grid parity already so people are saying, ok, solar is great because it’s also going to be cheap for our people. So outside of Europe solar is on a winning streak at the moment. The progress is better outside of Europe; even in other developed countries like the US you still have the ITC (solar investment tax credit) running through until 2022.”

Whilst the signing of the agreement on Friday is a significant push for collaborative climate change globally, there is now work to be done to ensure the good intention is translated into actual change, particularly on the part of European signatories.

“The EU has signed up to be a part of the high ambition coalition, to limit the warming to 1.5 degrees Celsius and I think that to do that they will probably have to increase their ambition in terms of the reduction of GHG emissions and the amount of renewables that they want to see through the grid by 2030,” said Watson.

“They have set a target of at least 27% of renewables in the energy mix by 2030 which is actually only a little bit better than ‘business as usual’ which is about 25%. For me the point is that by signing the agreement in New York, now they have to put their money where their mouth is and they have to make the changes to make this mean something.”

In practical terms, this would involve countries now setting up plans to detail how they are going to install more renewable energy sources, including solar. In conjunction with this, plans should also include means to decommission the most polluting forms of power production.

“It’s all about the plans; basically you can sign up to anything you like, but if you don’t really put into place the regulation to drive it, which requires a certain degree of planning, you’re not really going to achieve your targets,” added Watson.

Homing in on Europe specifically, Watson mentioned that the continent is particularly devoid of serious ambition; maintaining the same renewable energy targets as before the Paris agreement.

“The European Commission (EC) should set the strong targets and countries themselves will need to start implementing more ambitious objectives,” said Watson. “At the moment we have moved beyond the [feed-in tarrif] FiT and subsidies we’ve moved into era of tenders. What we need to do in all countries in Europe is have a very structured approach to tenders; how regular the tenders are going to be, how much is going to be given to solar – so there’s absolute transparency about how we are going to implement solar in the coming few years. But I would say in the next four to five years, the tenders need to be regularised, they need to be set in law; what each of the countries is going to do in terms of the amount of solar they are going to put in. This would be really very good for industry because it would give us a stable and transparent framework from which to work.”

Regardless of the fact that Europe is lacking in specific implementation plans, Watson asserted that the Paris agreement did stir a lot of movement; and solar will play a big role in achieving the targets stipulated in the agreement.

However, the agreement, which is over 20 years in the making, was the inspiration for many exciting solar partnerships and initiatives. The Global Solar Council (GSC) was launched on the back of COP21; giving the industry, for the first time, a unified international voice. Since then, the Council has gone on to receive substantial backing from big international solar players who joined as founding corporate members, and launch a global advisory group who will work with international corporations on specific solar commercial perspectives.

The Terrawatt Initiative (TWI) was also launched on the fringes of COP21, in response to the creation of the International Solar Alliance (ISA). TWI’s goal is to develop regulations encouraging competitive solar generation in a bid to combat climate change. Last week, at the official ratification of the Paris agreement, the global non-profit organisation has partnered with the Climate Bonds Initiative to further accelerate global financing of solar energy. The Terrawatt Initiative has enormous potential to make its mark on solar financing; with significant endorsement from key private sector solar energy stakeholders. On Friday, Total announced it had joined the Terrawatt Initiative as a founding member. This update from the energy giant is closely aligned to its public aim to be a top three player in the solar energy industry within the next 20 years.

Whilst the signing arguably changes very little in itself, the display of recommitment around the world has potential to apply pressure elsewhere. For example, the stalled US Clean Power Plan and also for the EU to be able to ratify the agreement and implement any measures that will ensure it meets its targets.

Undoubtedly, there is still substantial work to be done to fulfil the desires displayed at COP21. But the signing ceremony on Friday undoubtedly marked the beginning of a new chapter in the international climate talks.