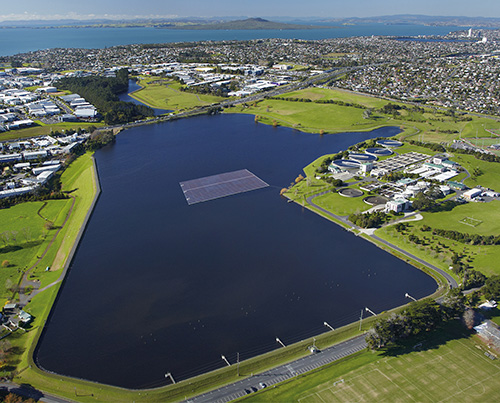 New Zealand looks set to join the countries tapping into floating solar worldwide via a new, city-based scheme, sponsored by a utility duo.

Electricity and water providers Vector Group and Watercare announced today they will deploy in Auckland what they claim is New Zealand’s first ever floating solar farm.

The installation planned at the Rosedale wastewater treatment pond, to the northwest of New Zealand’s largest city, will reach “megawatt-scale” proportions, the utilities explained.

Contacted by PV Tech this morning, neither firm had shed light on the project’s exact installed capacity figure – nor the installation's design – by the time this article was published.

According to their statement, the 2,700-plus-panel plant will supply a nearby wastewater treatment plant, helping power the pumping and aeration of the bacteria that break down the waste.

Watercare, the document goes on to say, will finance and accommodate the unit while Vector’s PowerSmart division will take care of deployment itself.

Once up and running, the floating plant is designed to bring annual CO2 emission savings of 145 tonnes, equal to taking 66 cars off New Zealand’s roads.

The project is being touted as the largest solar installation, floating or otherwise, to be proposed in the Oceanic island state to date.

Nation-wide installed PV capacity was said by IRENA to sit at around 80MW last year. In an update in February this year, state-run grid agency Transpower said a market of 11GW is possible if PV was rolled out across all residential households.

Speaking after the new floating scheme was unveiled, Vector Group's CEO Simon Mackenzie commented: “Even larger systems are already common overseas and with reports out of Australia of costs as low as 4-5c per kWh, when that scale arrives here we’ll see solar’s real potential to set a new cap on the wholesale market which over the past few days has been around double that.”

11 October 2022
PV CellTech Extra will be held as a series of live webinars and on-demand sessions on 11-13 October 2022. We'll be taking a slightly further forward-looking view at the technologies and roadmaps for new cell architectures set to dominate mass production during 2023-2025 with special emphasis on the potential timelines for technologies beyond the single-junction cell design, including perovskite and hybrid concepts.
auckland, floating pv, floating solar, new zealand, oceania, solar pv, utilities, vector group, watercare