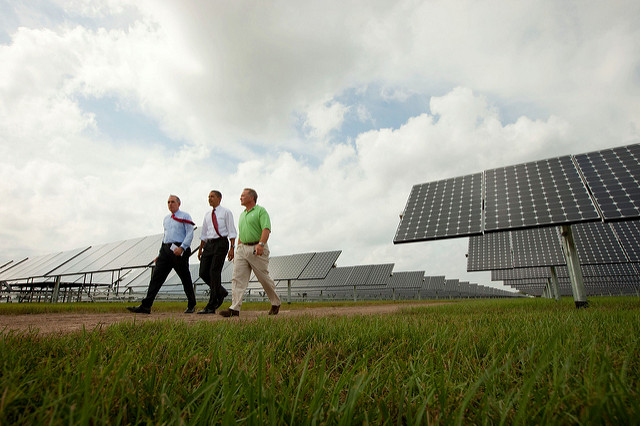 As his White House term draws to a close, president Barack Obama has argued that the momentum of wind and solar is “irreversible”, in a last-ditch attempt to tout clean energy.

In an article for Science, one of the world’s most prestigious scientific journals, Obama launched a defence of emissions regulations and climate action, in the face of Trump’s ardent denial of global warming and plans to scrap the Paris Agreement and Clean Power Plan.

Writing in the journal, Obama argued that reducing greenhouses gases (GHGs) can help economic growth. On the heels of his article came a petition signed by more than 600 collective businesses and investors who also argued that clean energy and a low-carbon economy is good for business.

Emissions regulations can “boost efficiency, productivity and innovation,” he wrote. “Specifically, CO2 emissions from the energy sector fell by 9.5 percent from 2008 to 2015, while the economy grew by more than 10 percent…The importance of this trend cannot be understated. This 'decoupling' of energy sector emissions and economic growth should put to rest the argument that combatting climate change requires accepting lower growth or a lower standard of living.”

The outgoing president also argued that investments needed to reduce emissions should be continued. A recent memo written by the team leading Trump’s energy transition outlined the administration’s energy plans, which included cutting back all climate-related regulations and favouring fossil fuels. Trump also publically confirmed his intention to scrap related investment, during his presidential campaign.

Obama’s two terms in office have resulted in a flurry of environmental legislation, including the EPA’s Clean Power Plan and a significant boost in renewable energy projects.

“The business case for clean energy is growing,” Obama concluded, “and the trend toward a cleaner power sector can be sustained regardless of near-term federal policies…The latest science and economics provide a helpful guide for what the future may bring, in many cases independent of near-term policy choices, when it comes to combatting climate change and transitioning to a clean-energy economy.”

He also emphasised the importance of the US sticking to the Paris Agreement, saying it would benefit not only the US, but the international community as a whole. However, he added that Trump has the opportunity to “chart his own policy course” and his administration need not follow policies identical to his own. Last month, Bill gates concluded that the US is likely to see fewer incentives for renewables under Trump, after a phone call with the president-elect to discuss energy policy.

But due to the momentum clean energy has seen worldwide, Obama remained “confident” that this would continue, in spite of Trump.

“The mounting economic and scientific evidence leave me confident that trends toward a clean-energy economy that have emerged during my presidency will continue and that the economic opportunity for our country to harness that trend will only grow.”

The president also pointed to increasing private-sector investments in clean energy, and reductions in the per-kilowatt cost of solar and wind power.

President Obama’s article will be published in tomorrow’s edition of Science, and can be read in full here.

4 October 2022
Solar & Storage Finance USA, the only event that connects developers to capital and capital to solar and storage projects, will be back in November 2022.
barack obama, clean energy, clean power plan, cop21, donald trump, emissions, renewables, trump, us, usa