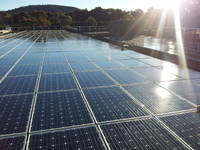 Photon Energy has provided details of two more major utility-scale solar PV projects that it is developing in New South Wales, Australia, as part of a 1GW pipeline in the state.

The first 253MW project at Suntop will require 400 hectares of land, while the 155MW Gunnedah plant will require 205 hectares. Photon expects to commence construction in 2019.

Both projects are being co-developed with a local joint venture partner. Photon Energy has also signed a grid connection process agreement with Transgrid, the operator of the major high voltage transmission network in New South Wales and the Australian Capital Territory.

The firm is also working on a 316MW solar project at Gunning in NSW as part of the pipeline.

Photon Energy has mandated advisory firm Pottinger to advise on the raising of development capital for the full pipeline.

“Given the attractive economics of PV power plants in Australia on the back of continuously falling investment costs, our Australian PV project pipeline is on track of becoming the most valuable asset in our group,” explained Georg Hotar, chief executive of Photon Energy NV.

Australia has seen a strong of major PV project announcements over the last year.