California-headquartered minigrid company Powerhive, scheduled to attend Solar & Off-grid Renewables Africa in Tanzania next week, is the first private company registered as a utility in Kenya.

Powerhive has been delivering access to electricity for rural and remote communities since its inception in 2011, classifying itself as much as a technology company as it is a developer or vendor of energy solutions. Members of the board include actor-turned-activist Leonardo DiCaprio and former UK government minister Gregory Barker. Andy Colthorpe spoke with Daniel Porras, vice president for impact and communications and a member of the executive team.

The US has a burgeoning and strong PV market – what made Powerhive, headquartered just down the road from Tesla, decide to look to the off-grid market in the developing world and why Africa?

I think with our model, the sweet spot for Powerhive is off-grid where people haven’t had access to electricity so our space is the energy access space. This is the off-grid market where our technology can thrive because we can make connections to households in a much more economic way. Much more cost-effective manner per connection of electrifying rural communities.

Chris Horner, the founder, has worked in East Africa with his previous company, Better Energy Systems, that produced the Solio solar charger. This was a nano-solar technology, a battery and panel device and we saw that that had a lot of potential to bring people to a basic level of electricity service for charging mobile devices, running small LED lights. The founders really saw the need for a bigger solar play in off-grid rural African markets.

Really, [they] pioneered minigrids in that context, almost five years ago now, in Kenya. That’s why they selected that market. The sheer need of the communities that are very far from the grid, while the economic case for extending the grid to connect those communities is weak and the founders of Powerhive saw that there was a big opportunity to connect those communities at a way greater efficiency than grid extension. That was probably the primary reason.

The other reason; the American market, or Europe is interesting and certainly solar is booming in those markets, but there’s also a lot of competition and legislative risk. So Nevada had a booming industry that was cut off at the knees by legislators who didn’t want to see change. Of course you see that in African markets as well but surprisingly you also see a bit more willingness to experiment with new technologies and new models for rural electrification.

The minigrid technology and model is strongly suited to the East African market and to Sub-Saharan Africa. Another key reason is the mobile money movement and uptake in those markets is in some ways more advanced than we have here. 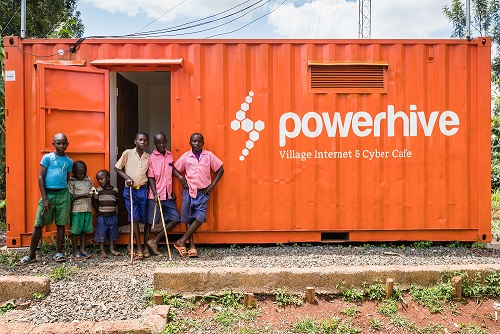 Can you elaborate on that point about mobile money?

That’s pre-paying for electricity with your mobile phone, so that’s part of our core technology innovation. What we call our Honeycomb software platform – Honeycomb is our cloud-based software that manages our customer accounts so customers can prepay you the mobile money, or in the case of Kenya they pull out their mobile phones, use them to top up their Powerhive account and that prompts our honeycomb software to open the circuits and allow the electricity to flow into their houses. M-PESA, you know, is used very very extensively throughout the population of Kenya and that’s another reason why that’s an attractive market to us.

We are often hearing that the needs or desires of remote communities is changing – from perhaps providing some lighting or telephone charge points, to a need for much larger capacities of energy that can also enable industrial processes and economic activity. Do you have a particular view on this?

Some people talk about the energy access ladder. Particularly in these markets you have folks that have never had electricity. They use kerosene and batteries and diesel. I think what we’ve seen is that folks will first get a battery or a basic solar lamp and then those things will provide a bit of light, maybe charge a mobile phone – and that’s very important and a good step up the ladder.

But then people see that oh wow, they can do a lot more with electricity. Some people will get solar home systems, small battery and panel systems that provide DC electricity and I think Powerhive’s sweet spot as a minigrid developer is providing productive AC electricity. So that’s really part of our core offering, helping people to leverage productive electricity to build micro-enterprises and really improve their livelihoods.

An example of that is a programme called Kuku Poa, literally ‘better chicken’ or ‘better poultry’. It’s a business opportunity to get involved in poultry rearing. Customers can subscribe and they will be delivered hatchlings.  They then brood the chicks using electric bulbs and brooding kits that we provide, along with professional training, with veterinarians on staff to train customers in how to comply with relevant laws. We also provide market access. We get buyers together and have auction days where folks come in and buy chickens directly from our customers.

In our case we’re dealing with people who live on maybe $2, $3, $4 a day and what we’re hearing is that this is changing peoples’ lives in a very tangible way.

One anecdote I can share; there was a man I met who told me he basically has seven children, he had inherited, when his brother passed away, he took care of and adopted his brother’s children. He’s a hard-working man who had to take several of the children out of school because he couldn’t afford the fees. This was right before exams. Then the next Saturday, Powerhive had a poultry buying auction day. He was able to sell his chicks, get revenue and get his kids back in school just in time to take the exams, with the money he made from the Kuku Poa programme.

This article has been amended to correct the spelling of M-PESA.