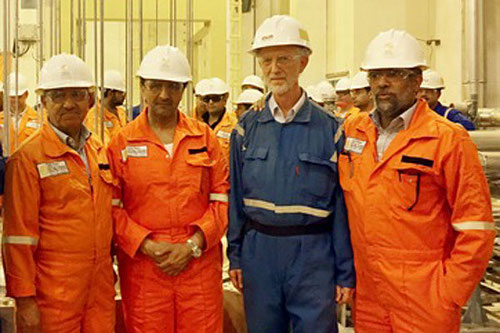 QSTec had secured financing for the construction of the 8,000MT plant back in May, 2012. Since then the company has acquired major stakes in SolarWorld and centrotherm photovoltaics. SolarWorld is expected to be a key captive customer of the polysilicon, while centrotherm which provided much of the technology for the polysilicon plant would be responsible for further expansions, said by QSTec to be over 50,000MT, sometime in the future.

“The first polysilicon produced from our facility in Qatar represents a major milestone for QSTec and has paved the way for a solar manufacturing base to be established within the region,” said QSTec’s Chairman and CEO, Dr. Khalid K. Al Hajri. “This important achievement in the history of QSTec has been made possible by the continued support of all our shareholders, stakeholders, and the dedication and commitment to the success of the project from our QSTec team. We are now moving from the construction phase towards full scale production and it’s an incredibly exciting time for QSTec and the region’s solar industry.”

Recently, SolarWorld announced that it would stop production of P-type multicrystalline wafers, cells and modules and migrate solely to P-type monocrystalline products. The company would require high-purity polysilicon for mono wafer production.

High-purity polysilicon is in strong demand as a growing number of PV manufacturers are migrating some or all of their in-house production to mono, although the majority reside in China and SE Asia.