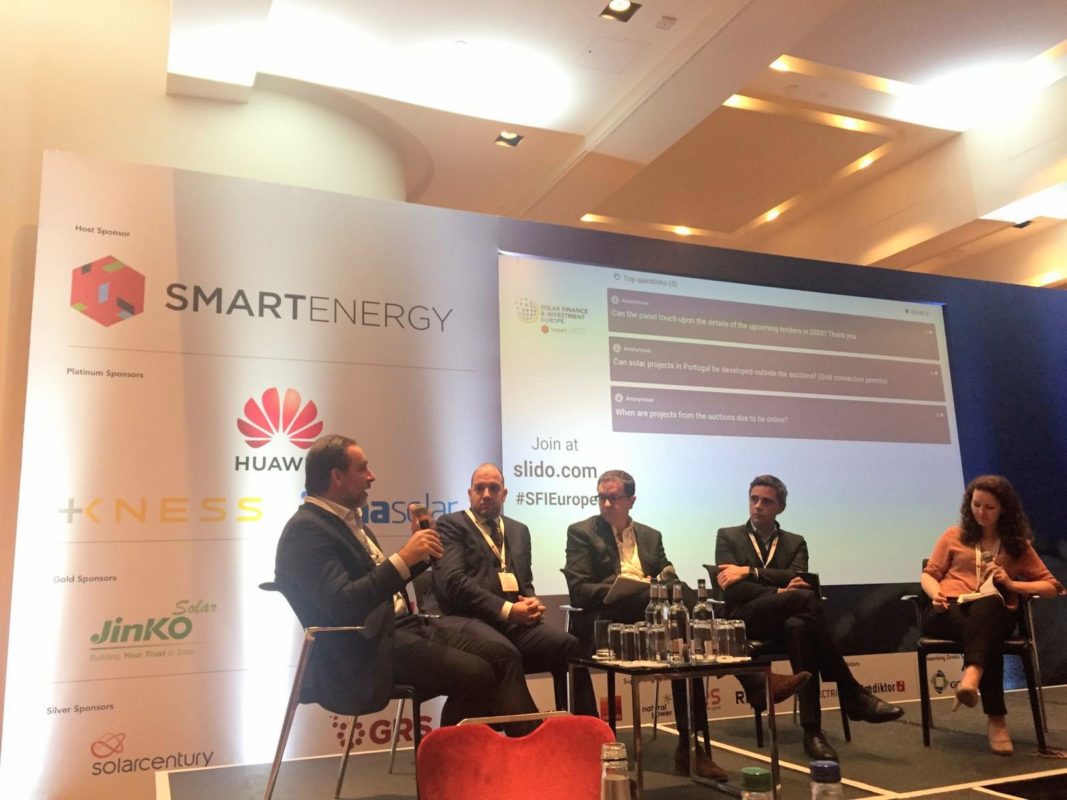 Held in London this week, the trade show laid bare the unease rippling through the industry after tariffs of €14.76/MWh (US$16.44/MWh) emerged at Portugal’s 1.15GW PV auction last July, a figure the government billed at the time as a “world record” and “great news” for consumers.

A dedicated session examined whether Spain could copy Portugal's PV auction design, where firms bid for either fixed tariff or a payment to the system modality. Pedro Amaral Jorge, CEO of Portuguese green energy body APREN, noted such a scenario has been hinted at by media reports.

The chance that Spain – Europe’s top PV installer and subsidy-free star last year – may follow in Portugal’s footsteps did not trouble Ricardo Folgado, structured finance director at Lightsource BP. “Anything”, he said, would be an improvement on Spain’s controversial auction design of the past.

Carlos Rey of Foresight Group was less optimistic, however. “The rumours Spain’s government may copy the model concern me a lot,” the director said. “I’m worried it will fix a benchmark for Portugal’s next auctions – we need to do our job and we cannot survive on such low prices.”

Past Solar Media events have seen Portugal criticised over its PV auction’s second modality, which saw Iberdrola and others pay in return for the right to produce at market prices. Some have warned the approach could pave the way for speculative bids, a premise the government has rejected.

At this week’s London event, APREN’s Amaral Jorge said his concern was that “speculative price schemes” may become available for players to access the grid. “We need to think about auctions but also other systems, other than auctions, we can use to award capacity,” he said.

The London session on Wednesday showed Portugal’s solar tariffs of €14.76 – proposed by auction winner Akuo, a French developer – surprised many in industry circles.

Lightsource BP’s Folgado said his firm decided to “step back” from the auction as it saw bidding tariffs plummet. He conceded the ultra-low prices are “good news” for Portugal and a “legitimate flag-planting” exercise by some firms but added: “I don’t think the economics quite stack up yet.”

“I share the surprise”, offered Foresight’s Rey, speaking right after Folgado. “The result was more shocking if you consider that it wasn’t the usual IPP suspects that put in such a low bid, but a pure developer. With this deal, it will be complicated for the project to come online.”

The view of APREN’s Amaral Jorge as he took the floor next was: “My concern is if we’re telling the market you can have [a PV price] that averages 50% lower than the average wholesale electricity market in Iberia, we need to stick to it and make sure we deploy and get to commissioning.”

Auction worries did not stop speakers from feeling buoyant about Portugal’s solar targets, meant to take installed PV capacity from 572MW (2018) to 8.1GW-9.9GW (2030). In the final round-up of answers, all panellists conveyed faith that the country is primed for major solar growth.

As noted by APREN’s Amaral Jorge, many unknowns still surround the next solar auction, due to launch in late March. The association has asked the government for a longer bidding window so that players have more time to consult advisers and line up finance, he said.

The real bottleneck, said Foresight’s Rey, will be whether Portugal’s already constrained grid can accommodate aggressive solar growth targets. Speaking after him, Amaral Jorge said the “good news” on this front is that the 1.5GW-plus of coal capacity Portugal will shut down in the coming years.

The prospects and challenges of solar's new era in Portugal and the rest of Europe will take centre stage atand Large Scale Solar Europe 2020 (Lisbon, on 31 March-1 April 2020).

29 November 2022
PV ModuleTech EMEA in Madrid on 29-30 November 2022 will address the factors underpinning the changing PV module landscape, gathering together all the key stakeholders across the value-chain from module production to field testing. Join us for presentations from the leading players in the sector, clearly identifying the opportunities and challenges set to impact module supply to Europe and the Middle-East over the next few years.
apren, europe, foresight, foresight group, iberia, largescale2020, lightsource bp, lss20, portugal, sfi2020, solar auctions, southern europe, spain, tenders and auctions