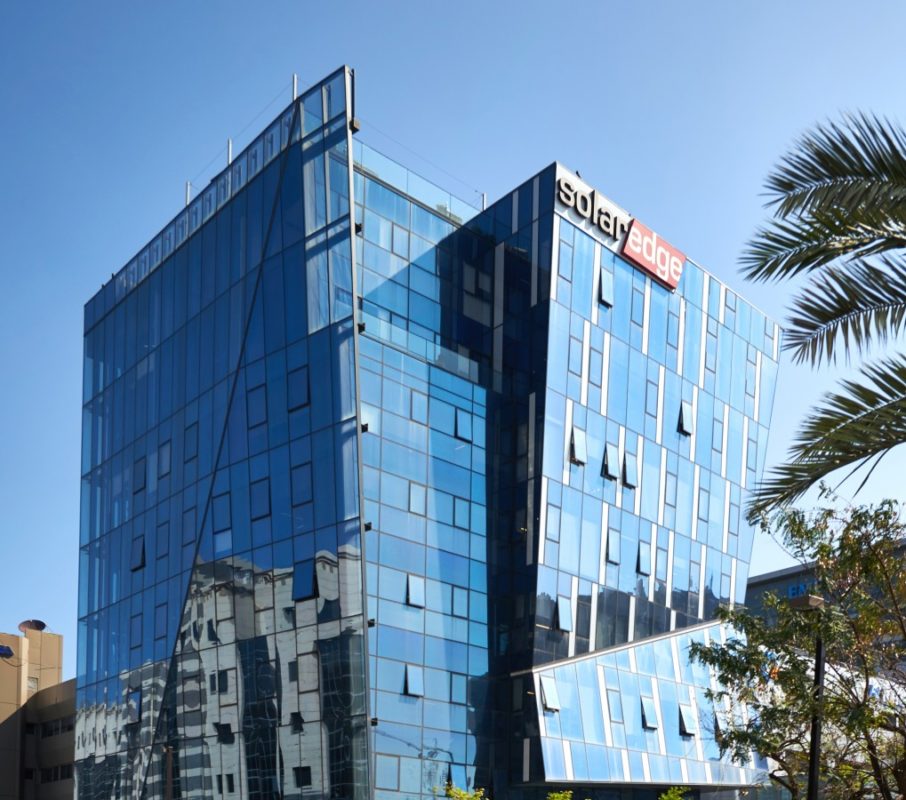 SolarEdge witnessed record revenues in Europe as sales in North America stagnated in Q3, with the effects of the COVID-19 pandemic still clear and present in the company’s financials.

Reporting its Q3 financial results yesterday, SolarEdge recorded total revenues of US$338.1 million , up 2% for the figure recorded in Q2. However this was down 18% on the company’s revenues in the third quarter of 2019, indicating the ongoing headwinds caused by COVID-19.

Likewise, while solar revenues edged upwards in Q3, up by around 1% sequentially to US$312.5 million, they were down 19% year-on-year. 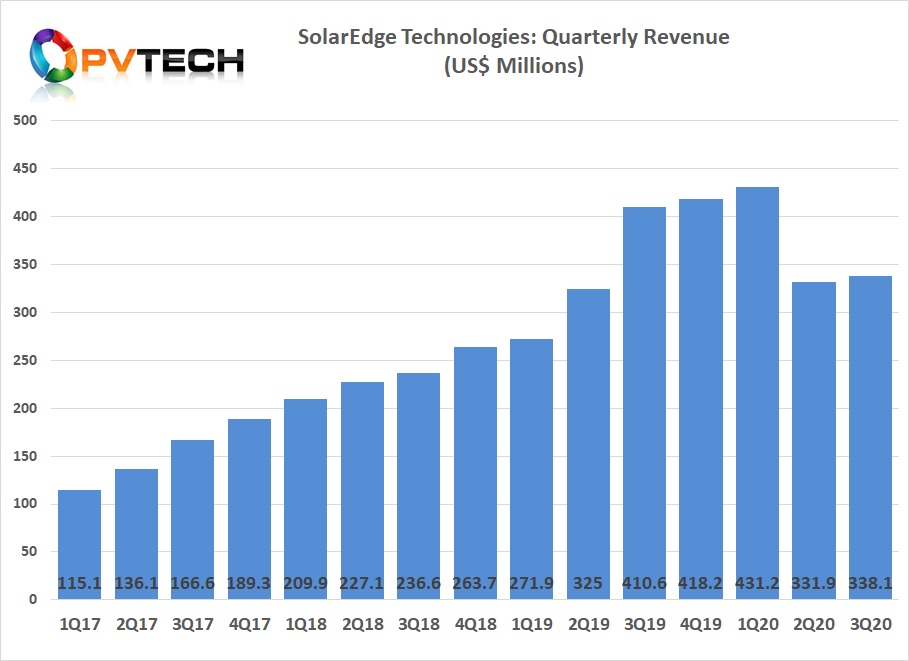 This came despite a new record revenue figure from European sales, which topped US$165.6 million on the back of surging growth in the Netherlands and Germany, representing just less than half of the firm’s total revenue in the three months ended 30 September.

In contrast, Zvi Lando, chief executive at SolarEdge, told analysts in an investor call following the results disclosure that its revenues from North America – historically the company’s largest market – had flatlined quarter-on-quarter as COVID-19 continued to cast something of a shadow over equipment sales.

This extended into the C&I market, which Lando said was recovering slower than anticipated. Having witnessed distributors and EPCs increase their revenue during the initial months of the pandemic in anticipation of a quick rebound, the company said a continued slowdown in the US, Europe and Australia had meant inventories in the C&I channel remained high, prompting slower shipments in this area.

Lando was however keen to paint a brighter picture for the horizon, with installations rates and distributor sell-through in September up 22% in residential and 40% in commercial compared to August. This has prompted SolarEdge to expect healthier guidance for the coming quarter, with North America residential sales expected to surge by around 50% in Q4.

Such a performance means that SolarEdge has come in around the middle of its outlook range issued within its Q2 results disclosure in August, which projected total revenues of US$325 – 350 million and solar-specific revenues of US$305 – 325 million.

While strong recoveries are expected in Q4, SolarEdge’s guidance for the period still illustrates some of the broader problems facing equipment sales as COVID-19 continues to spread, with a long list of countries now experiencing a second wave of the virus.

SolarEdge has guided total revenues of between US$345 – 365 million, and solar revenues of US$320 – 335 million. While falling in line with this guidance would illustrate sequential growth, performing to the top end of that forecast would constitute year-on-year falls of 13% and 14% respectively.

Total shipments for Q3 stood at 3.3 million power optimisers and 152,500 inverters. Zvi Lando revealed that the first shipment of products to the US from the company’s new Sella 1 factory in Israel had started this quarter, allowing the company to bolster its shipment of non-tariff products into the US. SolarEdge now expects 60% of its products sold in the US will originate from non-tariff regions in Q4. 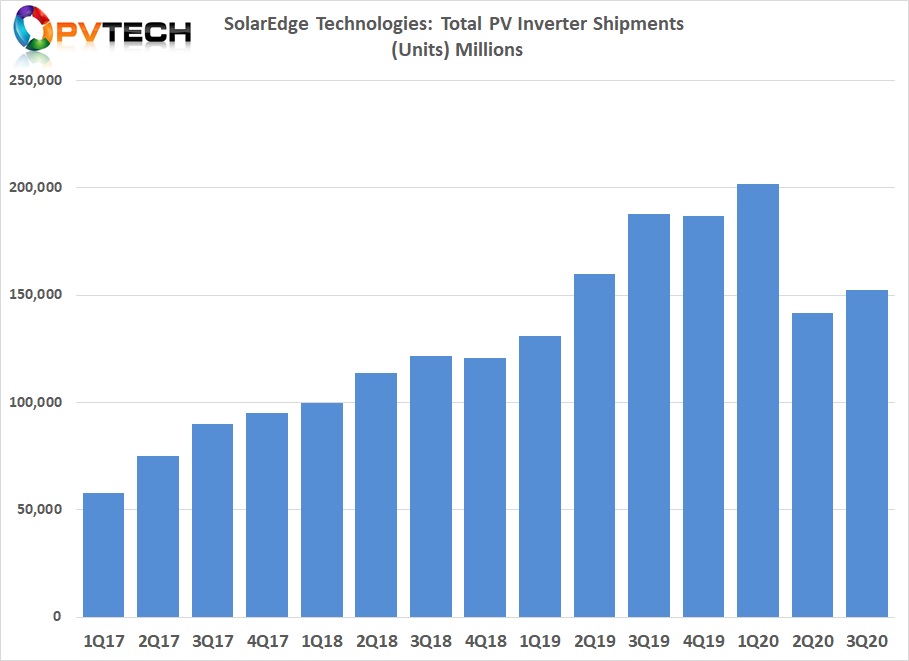 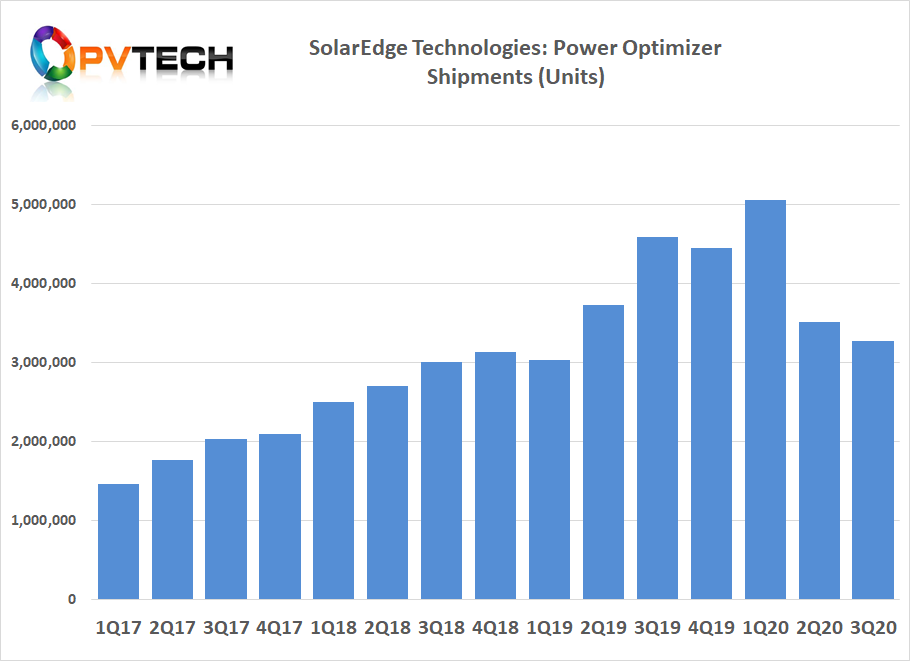 In addition, Lando talked up the location of the factory being in relatively close proximity to the company’s R&D labs. The first prototypes of 330kW inverters, tailored for mid-sized ground-mount and small utility-scale solar farms, have emerged this quarter and are slated for introduction late next year.

Commenting on the performance, Lando said the third quarter had been typified by significant growth in Europe in spite of the COVID-19-triggered economic slowdown, with signs of a return to pre-COVID levels of activity in the US market.