‘Stonking’ Tory mandate must be used to deliver net zero, not just Brexit 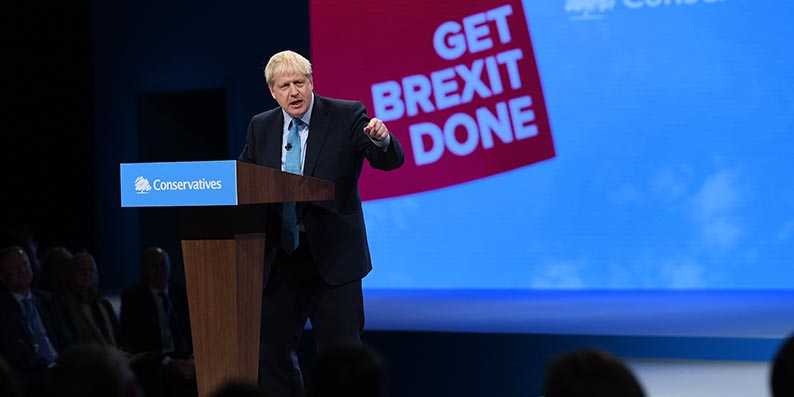 Come 10pm yesterday evening, it was all over bar the shouting. And boy, was there a lot of shouting. The Conservatives winning a majority – their largest since 1987 – was perhaps not a surprise, but the manner and scale of victory will reverberate for some time.

In achieving such a “stonking” – Johnson’s words, not mine – mandate, the Conservatives now effectively have carte blanche to run the country as they see fit. Immediate attentions will turn to delivering Brexit but, long-term, the Prime Minister’s in-tray is spilling over.

A sizeable chunk of that pile will be related to delivering net zero. The UK is committed to reaching the elimination of all carbon emissions from its economy by 2050 at the absolute latest, driven firstly by a surge in renewable generation that must occur within the next decade. Our buildings must get significantly more efficient and our modes of transport electric wherever possible. We must make enormous sectors like agriculture, industry and shipping and aviation green, and cracking the enigma that is decarbonised heat is a top priority.

All of which, of course, was given but a cursory mention within the Conservative manifesto.

The Committee on Climate Change was steadfast in its recommendation that a net zero target should not be adopted without the requisite policy suite to achieve it. That was seven months ago, and it’s been six months since then-PM Theresa May enshrined that target in law. But in the months since then, the energy white paper has been kicked into the long grass and inaction has followed.

Before the election, energy secretary Andrea Leadsom intimated that the white paper, despite already being months late, was not ready to be published, pushing it into Q1 2020. That the Tory manifesto was so devoid of specific climate and energy policy would suggest it’ll be a push to see it published by then as well, leaving the Green Economy still waiting for direction.

It would be remiss to say that Johnson is incapable of leading the country in this regard. He’s barely been in the job for five minutes and a majority of this kind could yet allow him to give his party’s more fringe elements the cold shoulder.

But let’s not forget, this is a man not exactly famed for taking responsibility. Having spent the last eight weeks refusing to say how many children he’s fathered, failing to answer questions on relationships he fostered as Mayor of London, avoiding interviews, ducking debates and hiding in fridges, how, simply, can the Prime Minister be trusted to shoulder the responsibility of delivering the unprecedented socio-economic change the climate crisis requires? These points may seem irrelevant to an energy publication, but they are critical in hinting towards the kind of regime Johnson will seek to run.

The government’s track record on this front is hardly glowing either. While Contracts for Difference have indeed delivered remarkable results in helping offshore wind prices tumble, actions elsewhere have been disastrous for the green economy. The cheapest energy generation technologies – onshore wind and solar PV – have been stymied as a result of ideologically-driven, ham-fisted policy decisions. The ICE vehicle phase-out date of 2040 is not ambitious enough by a long shot. New build homes could’ve been significantly greener were it not for the decision to scrap Zero Carbon Homes before it had even got off the ground, and decarbonised heat has all but been ignored, as if it were too difficult an issue to solve simply so government has taken the Ostrich approach to problem solving. Will a Johnson-led government be any different? It’s too early to say.

It’s for that reason that a strong opposition is vital, holding government to account every step of the way. That Labour has now become the first opposition party to lose seats in a General Election does not bode well.

The question is now where the Labour Party goes from here. Corbyn’s vision for the energy sector represented the most radical change in a generation or more, and regardless of your political persuasion, the suite of policies included within Labour’s manifesto did stand to deliver unprecedented decarbonisation.

The problem, evidently, is not the policies but the person behind them. Polling expert Sir John Curtice remarked earlier this week that perhaps the Tories’ greatest victory had been turning the Labour leader into a bogeyman for the electorate. This much was evident from the bulk of the Conservative election campaign which focused not on what they could do, but on what Corbyn would do given half the chance. Corbyn has become almost the antithesis to The Simpson’s Monorail Man, blessed with an unbelievable product that he just can’t seem to sell.

Corbyn was correct about one thing, though. Change surely will follow this General Election result, only I doubt he’d have thought it would be at the top of his own party. He will surely stand down in the coming days, likely followed by John McDonnell. Shadow BEIS secretary Rebecca Long Bailey is amongst those put forward as a possible successor and she’d be an interesting candidate from a green perspective, having championed renewables and a more decentralised energy system since her appointment two-and-a-half years ago.

To be indulgent for a moment, journalists will too have a critical role to play in the next four years. The profession has certainly had its moments of late, least of all in the last eight weeks. Trust in news and the media in general has plummeted, but the role of journalists is still to speak truth to power whenever and wherever possible. Should the incoming government fail to legislate properly for net zero, holding it to account will be a task of unprecedented importance for journalists of all walks.

‘Getting Brexit Done’ aside, politics in the UK is likely to now wait for the dust to settle. The last parliament session was the longest in decades and MPs have looked weary and brow beaten for some time. It’s fair to say the electorate too needs a break, with two years of spin and counter-spin having left many with a dizzy head.

It’s all over bar the shouting, but the noise will once again pick up soon enough.