US-headquartered high-efficiency solar panel manufacturer SunPower Corp has started changing its long-held strategy of supplying only its in-house produced E Series and X Series panels to residential and C&I (Commerical and Industrial) PV projects in the US.

SunPower has said many times that it would not be deploying its P Series panels in US projects, which use China fabricated P-type mono PERC (Passivated Emitter Rear Cell) technology and assembled at SunPower’s main assembly plant in Mexico, which through September, 2018 is still the case, according to publically available data for California solar installations.

It should be noted that the P Series panels would be classified as in-house should SunPower shift to supplying the P Series in the US and difficult to identify in the data.

The change in strategy is that SunPower is also using panels from other major PV manufacturers, such as ‘Silicon Module Super League’ (SMSL) leader JinkoSolar and SMSL members, Canadian Solar, Hanwha Q CELLS and LONGi Solar.

SunPower has also sourced supply from REC Group and LG Electronics as well as from some other unspecified suppliers from data compiled by ROTH Capital, which PV Tech has been analysing in 2018. 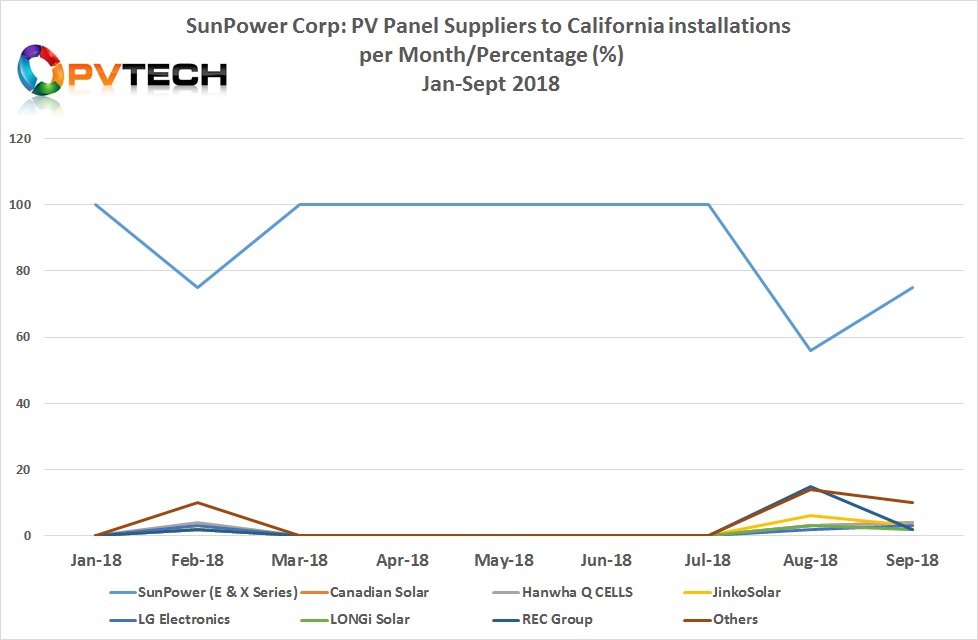 The third party panel usage would seem to have started back in February 2018 but used 100% in-house sources panels through to August, something SunPower had done throughout 2017, as expected.
We had not highlighted before the panel supply changes that occurred in February as SunPower had returned to 100% in-house panel sourcing for the next five months, so gave the impression that some small projects for commercial reasons or in-house supply constraints could have behind the one month anomaly.

As the chart below highlights, the big winner in August and September has been REC Group, which has in-house production of wafers, cells and modules at a single production sight in Singapore. REC is well known for its P-type multicrystalline half cut panels, which have been extensively used SunPower’s rival Sunrun and other non-public installers in the US for both residential and C&I applications for many years.

REC panels accounted for 2% of SunPower’s California installs in February, 2018 but returned to supply 15% of total panels installed by SunPower in August and accounted for 10% in September.

SMSL member and major P-type multicrystalline panel producer, Canadian Solar panels accounted for 2% of installs for SunPower in February and returned to supplying 3% of panels in August and 4% in September.

A similar supply pattern exists for the other third party suppliers, regardless of the cell and panel technology used.

Leading P-type monocrystalline panel producer and SMSL member, LONGi Solar supplied 2% of SunPower’s panel need in February and 3% in August, followed by 2% in September. LONGi Solar had become a major supplier to Sunrun in the first half of 2018.

High-efficiency N-type mono panel producer, LG Electronics followed a similar share as LONGi Solar, having supplied 3% of SunPower’s California installations in February, 2018 then 3% in August and 2% in September.

Not known for using third party panel suppliers in recent years, the fact that SunPower has sourced around 38% of its panel needs in California through to September, 2018 should be treated as a new business strategy, although the mix could meaningfully change quickly, based on PV Tech’s recent analysis of Tesla’s panel purchasing shifts. 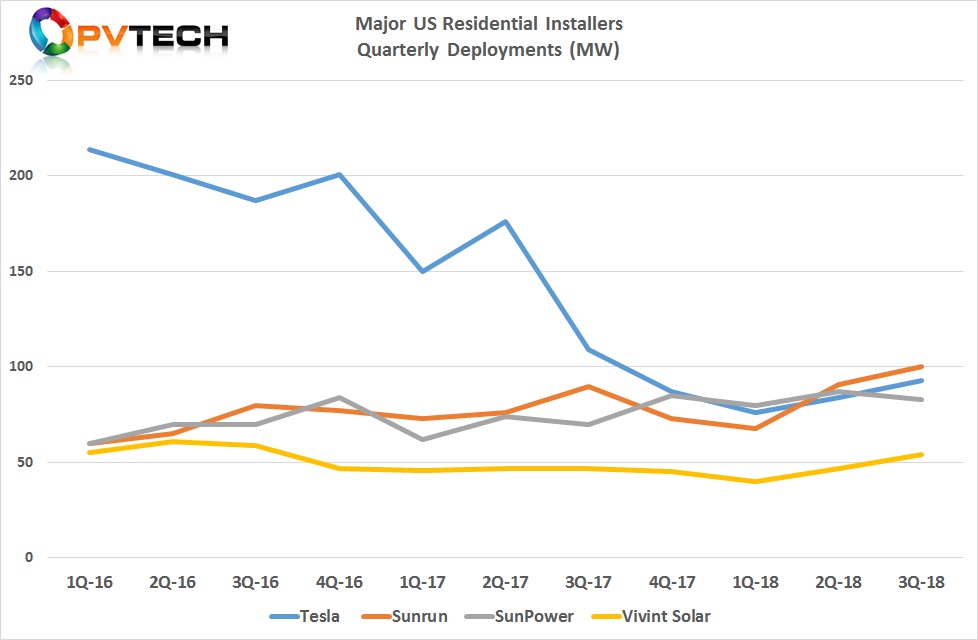 15 June 2022
Consumers are turning to residential renewables in significant numbers, driven by a desire to be environmentally conscious and a wave of high power prices. But turning green requires easy-to-use and, above all, safe technologies that meet expectations. Huawei is committed to building efficient, safe, reliable and grid-supporting smart PV plants that also provide smart services to consumers, and its Residential Solution has been tailored to meet consumer demand. This webinar will demonstrate the full suite of technologies offered within the Huawei Residential Solution, including a smart energy controller, smart AC charger, and AI-powered energy storage solution, and detail how it can place power back in the consumer’s hands.
c-si manufacturing, california, canadian solar, commercial and industrial, hanwha q cells, jinkosolar, lg electronics, longi solar, pv modules, rec group, residential, sunpower corporation, us