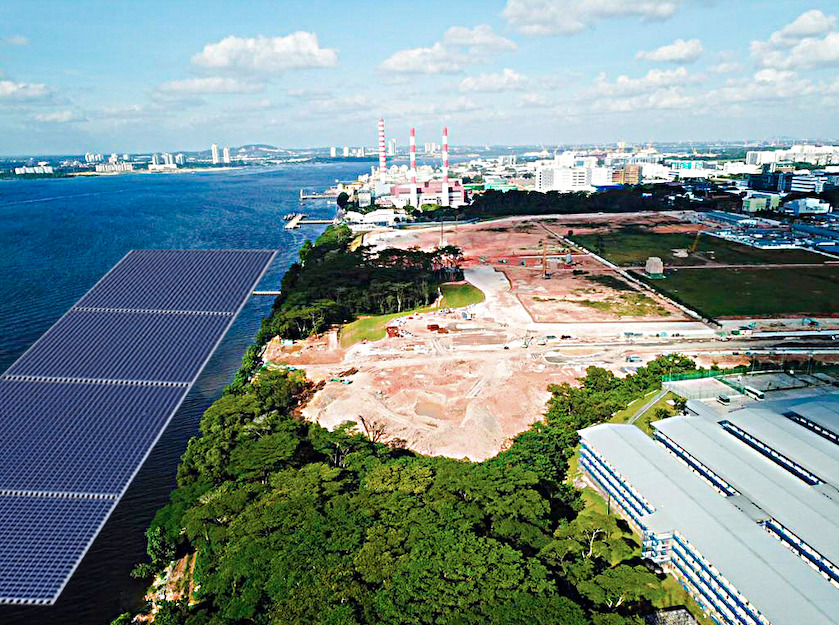 Singapore-based solar develop Sunseap Group is developing one of the world’s largest offshore floating photovoltaic (OFPV) systems, a pilot system standing at 5MW on sea water along the Straits of Johor.

The project, to be located north of Woodlands Waterfront Park, is expected to generate around 6,388 MWh of renewable energy annually, once completed – the equivalent to powering about 1,250 4-room flats. The five-hectare OFPV pilot in Woodlands is expected to be commercially operational early next year, having received support from the Singapore Economic Development Board (EDB).

To date, most floating solar plants in the world have been built on freshwater ponds, lakes or reservoirs, having recently surpassed a global capacity of 1.1GW and having a 400GW gloabl potential, according to a recent World Bank report. However, Sunseap's will be one of the first and largest to be located on the sea. Although Singapore is already a hub of floating solar technology with the world’s largest floating PV test-bed at Tengeh Reservoir, it also lacks land, rooftop space and freshwater availability, hence Sunseap's venture out to salt water.

Frank Phuan, co-founder and CEO of Sunseap Group, said: “Sunseap is excited to embark on this landmark project which demonstrates Sunseap’s engineering capabilities in research and development. Our floating solar system supports Singapore’s ambition to be a solar hub for Asia, and we hope it will ignite more deployment of alternative methods of tapping solar energy.”

Damian Chan, executive director of Energy, Chemicals & Materials, EDB, said: “Solar is one of the most viable and sustainable clean energy options in Singapore, and we continue to see innovative solar solutions being developed and deployed here. Beyond contributing to Singapore’s energy security and climate change commitments, Sunseap’s offshore floating photovoltaic system will help the clean energy ecosystem and build new, exportable capabilities for potential scale-up across the region.”

Sunseap's tests at Tengeh Reservoir so far show that the floating PV systems perform better than typical rooftop solar PV systems in Singapore, due to the cooler temperatures of the reservoir environment.

EDB is currently exploring the possibility of a 100MW floating PV system for private sector consumption at Kranji Reservoir, while the National Water Agency, part of the utilities agency PUB, has announced plans to tender for two FPV power plants for a total of 56.7MW capacity.

Børge Bjørneklett, co-founder of Ocean Sun and the inventor of a new floating solar concept, recently submitted a technical paper showing some of the pioneering R&D work being undertaken in the race to take solar to the open seas. His company has tested a 100kWp installation in the sea outside Bergen, Norway.

In February this year, a Dutch firm, Oceans of Energy, alos revealed that it planned to turn an offshore seaweed farm in the North Sea into a large solar power farm over the next three years.