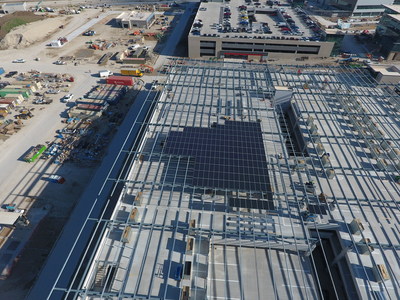 The new headquarters, which required an investment of US$1 billion to develop and is located across 40 hectares of land, features an 8.79MW array that is comprised of over 20,000 solar panels.

Other features at the headquarters include a rainwater harvesting system and a commitment to utilise only renewable energy — purchasing all electricity not generated by the solar panels from wind generated by Texas farms.

Originally planned as a 7.75MW installation, the PV project added nearly 1MW of installed generation capacity during its construction phase. Around 50 certified workers were responsible for the development of the system, which features solar panels on steel carport structures across the top of four parking garages.

6 June 2023
Join us in Napa to unlock the key to reliable PV module supply to the U.S. market in 2023 & 2024. We'll also be gathering the main players in the US solar market for some wine tasting!
sunpower, texas, toyota, us, usa