The recent news of Trina Solar’s decision to exit from the European Union’s minimum import price (MIP) should not come as a surprise to anyone tracking global solar trends during 2015.

While the terms of reference for MIP have barely changed during 2015, the same cannot be said for both global pricing and the shift of manufacturing (in particular c-Si cells) outside of China to Southeast Asia.

Putting these two global market trends against the MIP level set by the EU for most of 2015, it becomes very clear why Trina Solar is now the first major global module supplier to proactively choose to leave the MIP undertaking. And it is highly likely others will now follow suit, leaving the EU with a difficult decision to make soon about just how effective the current form of MIP can actually be.

The move to set up new cell capacity in countries such as Malaysia, Thailand and South Korea should not come as any surprise. The big-six Silicon Module Super League (SMSL) – comprised of Canadian Solar, Hanwha Q CELLS, JA Solar, JinkoSolar, Trina Solar and Yingli Green – has not been shy to tout plans for this type of expansions in recent years.

Perhaps driven more by shipment quotas planned to the US market, at some point it was inevitable that there would be adequate volumes to meet shipments to the EU that would be exempt from the conditions governing MIP.

However, the nail in the coffin is perhaps the lack of relevance of MIP to global pricing movements during 2015, coupled with the outlook from Europe for solar that tends to be at best static these days.

In fact, when setting its MIP, the EU should surely be looking at the pricing activity of the targeted supply-base (exemplified by the SMSL) at regions outside the EU, and how this has trended throughout 2015. Furthermore, given that production gross margins have been hovering in the 10-20% range for some time, it can hardly be the case that product is being dumped at the ASPs in question.

Yes, the overall ruling of the EU was more complicated than just looking at reported gross margins, and had the somewhat unquantifiable impact of bank loans to the Chinese companies during high growth phases that did put them in a position to sustain losses when margins went negative in recent times.

But that was then, and we are now in 2015, and the facts in question are much clearer to see in today’s 60GW solar market.

The graphic below is probably a good indication of why Trina Solar has now made its decision to exit from MIP.

The graph shows the comparison of MIP (converted on quarterly weighted rates to USD$) to the blended ASP of the SMSL to all countries less the EU region. The need to look at US$/Euro and not CNY/Euro exchange rates is also something that ought to be done, if the EU is truly looking at global price comparisons. 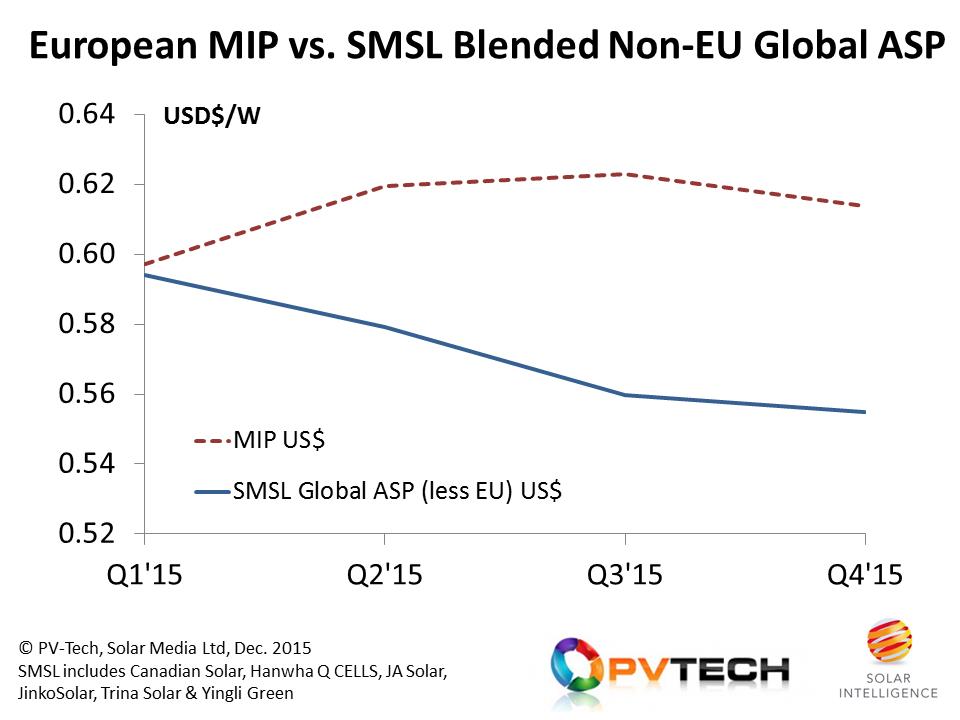 The upper (dashed) red line shows the MIP figure for shipments to the EU, with the changes from 1 April 2015 due only to currency exchange fluctuations. The lower blue line shows the decline in blended ASPs of the SMSL to all non-EU regions during 2015.

It is therefore clear that during 2015, a significant gap has opened up between MIP and ASPs to other regions. Coupled to recent rhetoric from the EU that suggests that relaxing (or terminating) MIP is not going to happen anytime in the near future, and the case to exit MIP (if a viable option) now becomes largely a fait accompli.

Once a critical mass of the SMSL has gone from MIP, then the ball is basically thrown back to the EU to make a decision one way or another. But considering the growing market share trends of the SMSL – and the fact that Hanwha Q CELLS is mostly non-MIP anyway – the question of what significance the EU’s next move has on the industry in the EU could simply become of academic interest only in the long run.

March 23, 2021
PV Tech speaks to Franck Zhang, head of global product strategy and market at Trina Solar, to discover the next steps for 210mm modules as power outputs continue to grow.