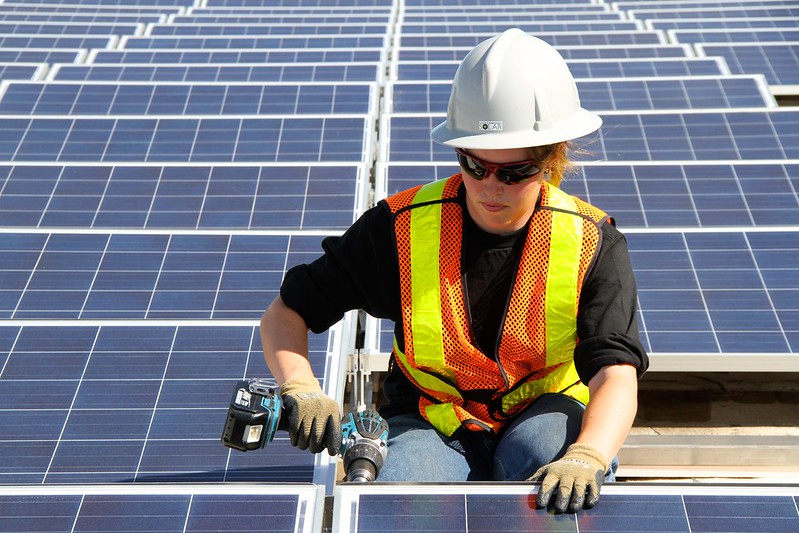 US solar jobs are on the rise again after a two-year slump, according to a new Solar Foundation report that highlights the industry's lack of gender diversity.

The boom in US installation fueling the creation of 5,643 jobs year-on-year was, the report said, itself prompted by the imminent phase-out of the investment tax credit, declining solar costs and waning concerns about US tariffs on solar imports.

“In just ten years, despite facing many challenges, solar has grown from a niche product to a mainstream energy source that provides a quarter of a million high-quality jobs,” Andrea Lueke, president and executive director of The Solar Foundation.

“This is great news, but it’s only a fraction of what can be accomplished if we are truly committed to solving the climate crisis and expanding the use of solar and storage. It’s past time for us to unite as a nation and create even more jobs by harnessing the power of the sun,” she added.

According to the census, thirty-one US states saw solar jobs multiply in 2019, with Florida, Georgia, Utah, New York and Texas emerging as the nation’s biggest growth engines.

California remains the country’s most competitive solar job market, accounting for about 40% of the cumulative US solar job capacity.

There were, however, 2,583 fewer jobs in the golden state in 2019, even if this was a less dramatic decline than the two years prior. The report anticipates Californian solar jobs will further rebound going forward, as the destructive fires of recent years push blackout-wary households to PV and storage systems.

Over in the US Southeast, solar jobs flourished, the new census figures show. As of the end of 2019, Florida had the second-highest number of solar jobs nationwide, at 12,202, up 18% from the year prior. Georgia saw the highest rate of growth in all 50 states, rising from 3,696 to 4,798 jobs. South Carolina’s solar workforce went up by 11% and Maryland's was up 8%.

Nevada was the top state for solar jobs per capita. One out of 202 workers in the state works in solar.

The industry's recovery on the employment front follows contractions in 2017 and 2018, the years when President Donald Trump’s section 201 tariffs on solar modules and cells were proposed and then imposed.

More than 50% of companies surveyed this year stated that federal and state policy challenges were the most significant deterrent to growing a profitable business.

“Adding more than 5,000 new jobs is impressive given the policy environment, but we could be leaps and bounds ahead of where we are if it weren’t for trade restrictions,” said Abigail Ross Hopper, president and CEO of the Solar Industries Energy Association.

“SEIA’s recent report shows that tariffs prevented tens of thousands of additional jobs from being created over the last three years. These are well-paying jobs that support families and boost communities.”

Gender diversity: Better than construction, but not good enough

Judging by the new census, women remain dramatically underrepresented in the US solar industry, comprising only 26% of the workforce (compared to 46.9% of the available workforce).

The report notes that the share of women in the industry “puts the solar industry ahead of the construction sector overall, where women make up 10% of the workforce, but still leaves much room for improvement.”

Within the US energy sector, only the oil, petroleum and natural gas industries boast more jobs than solar, the census indicates.

The document shows the US solar employs twice as many workers than coal industry, despite contributing to a much smaller share of overall electricity generation.