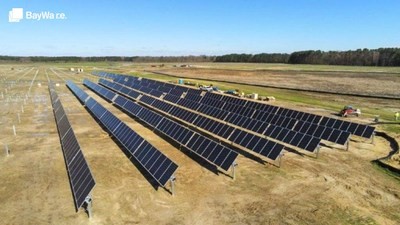 A round-up of recent news from the US market, as a VPPA-backed project in North Carolina secures financing and Kansas’ largest utility-scale solar farm comes onstream.

The Germany-based firm has turned to RBC Capital Markets for a tax equity investment in the project, while Rabobank and Banco Sabadell have committed to provide construction and term financing.

The financing will support the development of the Fern Solar project, sized at 133.6MW. Construction is already underway and expected to complete in the second half of this year.

Around one-third (42.5MW) of the project’s slated output will be procured via a virtual power purchase agreement backed by six major US companies, namely Bloomberg, Cox Enterprises, Gap, Salesforce and Workday. LevelTen Energy is facilitating the VPPA element of the deal.

Jam Attari, CEO at BayWa r.e. Solar Projects, said: “It is great to see the next stage of this pioneering project unlocked. Once generating power, it will be providing green energy for six major US companies through a market-first multi-party VPPA.”

22 April: Solar developer Lightsource BP has continued its flurry of deals in Pennsylvania by securing a contract with Southeastern Pennsylvania Transport Authority (SEPTA).

Under the deal Lightsource BP will finance, build, own and operate two separate solar farms – Elk Hill 1 and 2 – to be located in Franklin County. Those projects will have a combined generating capacity of 43.8MWdc, the power from which will contribute nearly 20% of SEPTA’s total annual power demand.

Pasquale T. Deon, board chairman at SEPTA, described the project as a “win-win” given that it will both create jobs for local residents while providing clean energy for the transport authority.

The deal comes amidst considerable activity for solar developers in the state, especially for Lightsource BP which last year broke ground on a trio of sites with a combined capacity of 70MW.

Both Elk Hill 1 and 2 are to come onstream next year.

22 April: Johnson Corner Solar Project, claimed to be the largest solar farm in the state of Kansas, has successfully commenced commercial operations.

The project, a collaboration between Lightsource BP and Sunflower Electric Power, began operations on 7 April 2020 and, at 20MWac, is said to be largest operational solar farm in Kansas.

Lightsource BP financed and constructed the US$37 million project, with all energy produced at the site being sold to Sunflower under a 25-year power purchase agreement. Sunflower itself is a not-for-profit electric utility providing various services to six member-owners located in central and western Kansas.

Now onstream, the site has effectively doubled Kansas’ utility-scale solar capacity, which Sunflower said stood at 14.1MW prior to the project’s completion.