US ROUND UP: Westchester’s largest solar array, Community solar in MA, Michigan 50% by 2035 RPS 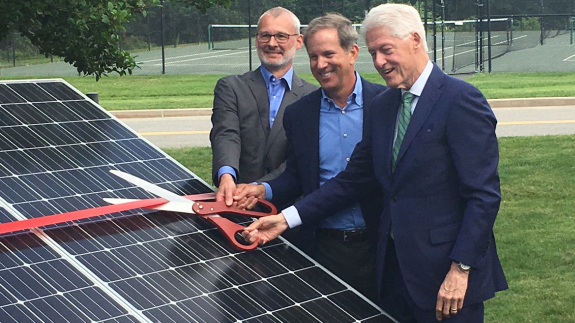 15 June: The former US president Bill Clinton helped Zurich-based insurance firm Swiss Re open its new solar array at its US headquarters in Armonk last week.

The 2.7MW array constitutes the largest solar facility in Westchester and was built by local commercial solar provider EnterSolar. The project was supported by NY-Sun, the solar development arm of the New York State Energy Research and Development Authority (NYSERDA).

Clinton helped cut the ribbon as the company launched the array, which is comprised of more than 7,700 PV panels, and expected to provide 60% of the power to the 700 employees in the Swiss Re offices.

“This is a company that for more than a decade has made a commitment to addressing climate change in a way that works for its employees, works for the company and works for the economy as a whole,” said Clinton at the ceremony on Thursday.

Swiss Re Americas CEO and President Eric Smith said the US$7 million project shows both the company’s commitment to Westchester and to addressing climate change.

“We understand the science behind climate change, we have been committed to it for many, many years,” Smith said.

Fitchburg Solar is one of 17 community solar facilities that Nexamp has constructed and expects to achieve operations in the coming months.

The facility is the first community solar project to serve Unitil customers in Massachusetts, and is located towards the rear of an active apple orchard in Fitchburg but will also provide power to neighbouring town of Lunenburg via a long-term PPA for discounted energy credits.

Specifically, Solaria provided 2,300 PowerXT and PowerView modules to buildings on the new campus located on Roosevelt Island. Combined, the Bloomberg Centre, as it is known and the Bridge building will utilise 47,000 square feet of Solaria PV panels, the equivalent of a 900kW system, part of a strategy to generate all of the power needed for the Bloomberg Center on campus.

The BIPV expert was selected for its ability to deliver both attractive aesthetics and high customisation and high power generation.

The Bloomberg Center is scheduled to open in September and plans to achieve net zero energy, with Solaria’s solar array playing an integral part in that quest.

“Solaria could not be more proud to be selected as a technology partner in helping this cutting edge campus achieve its ultimate goal of net zero energy for the Bloomberg Center,” said, Udi Paret, general manager Building Solutions, Solaria. “This is a truly historic moment for the building industry and we commend Cornell Tech’s commitment to innovation and sustainability.  They have proven that if you push the boundaries of current energy efficiency practices we can set new, financially viable, standards for green building in demanding urban centres.”

17 June: The state of Michigan proposed a bill this week that would accelerate the state’s renewable portfolio standard to 50% by 2035.

The bill is set to reduce energy costs, create employment and continue the effort to a cleaner and more independent energy future.

Senator Rebekah Warren introduced part of the bill package that also increases the energy efficiency standard to 2% energy savings per year, beginning in 2022.

“Our legislation that increases the renewable energy standard to 50% by 2035 will spur innovation in Michigan’s clean energy industry and create good jobs for Michiganders,” she said. “Expanding renewable energy will boost Michigan’s green energy sector and make our state a national leader within this emerging industry.”