Who owns the UK’s 12GW of solar? Part one

In a set of two blogs to be featured this week, we provide the first ever full breakdown of who owns the UK’s entire cumulative solar PV capacity, deployed as of the end of 2016, adding up to about 12GW of capacity.

The analysis was undertaken by the in-house research team at Solar Media, and formed the basis of a presentation I delivered on 1 February 2017 at the Solar Finance & Investment Europe conference in London.

More details on the 7.6GW of large-scale solar sites, including a wealth of information on the 1,021 large-scale ground-mount sites making up the largest segment of UK solar, can also be found in our Completed Assets monthly report, with subscription details available through this link.

This blog explains the background and methodology used to understand the ownership profile of UK solar, and covers details on the different rooftop segments. The second part of the blog – to be released in the next few days – deals with the ground-mount segment that forms the dominant part of UK solar.

Who owns the PV installation is always a key issue to understand, whether on rooftops (homeowner, third-party, tenant, etc.) or ground-mounted. The issue is of further interest on ground-mounted solar farms, with O&M companies and sub-contractors, and for any portfolios where asset managers are engaged.

From a secondary market perspective, any party engaged in refinancing, site acquisition and portfolio consolidation needs to know about site ownership at all times.

The UK market is firmly being reset now to become one dominated by secondary market trading during 2017 and 2018. From a European perspective, the secondary markets in the UK and Italy are currently very much ‘hot’.

Therefore, the timing of the presentation last week was perfect, with the UK moving towards 12GW of installed capacity by the end of this quarter.

A guided tour of the presentation and analysis

The remainder of this article now tracks through the main slides of the talk, with each slide followed by a short commentary.

The sub-heading of the talk also reveals the most important question within the UK solar industry today: what is the served addressable market (SAM) for tradable secondary assets during 2017.

Indeed, in addition to simply segmenting out the ownership profile of all solar installed in the UK, our research team painstakingly went through all 1,021 completed large-scale solar farms and assessed the likelihood of each being put on the market during 2017. 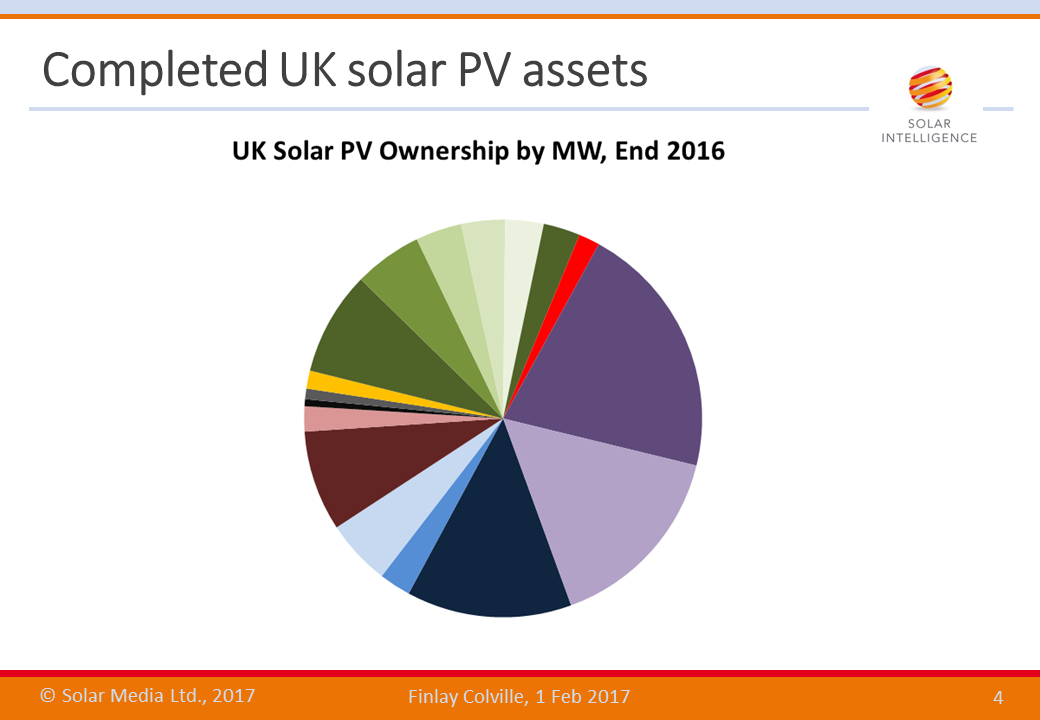 One of the main reasons no-one has done a full ownership study across the UK’s solar capacity until now is that it is far from straightforward. The slide above conveys this to an extent, with each coloured segment representing a different type of asset owner.

The remainder of the two part blog series, with accompanying slides, now explains what each of the segments above means, and formed the basis of the presentation objective delivered last week. 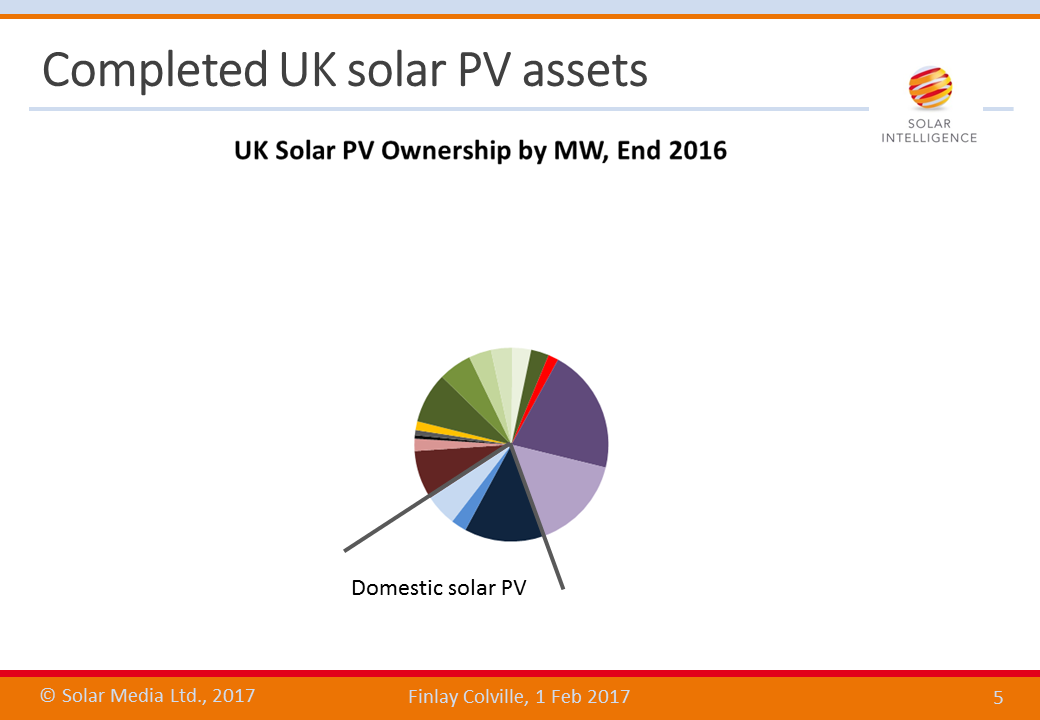 The first grouping to pull out relates to the multi-GW contribution from the residential (or domestic) solar installations deployed. Within this grouping, we have three different types of ownership profile. 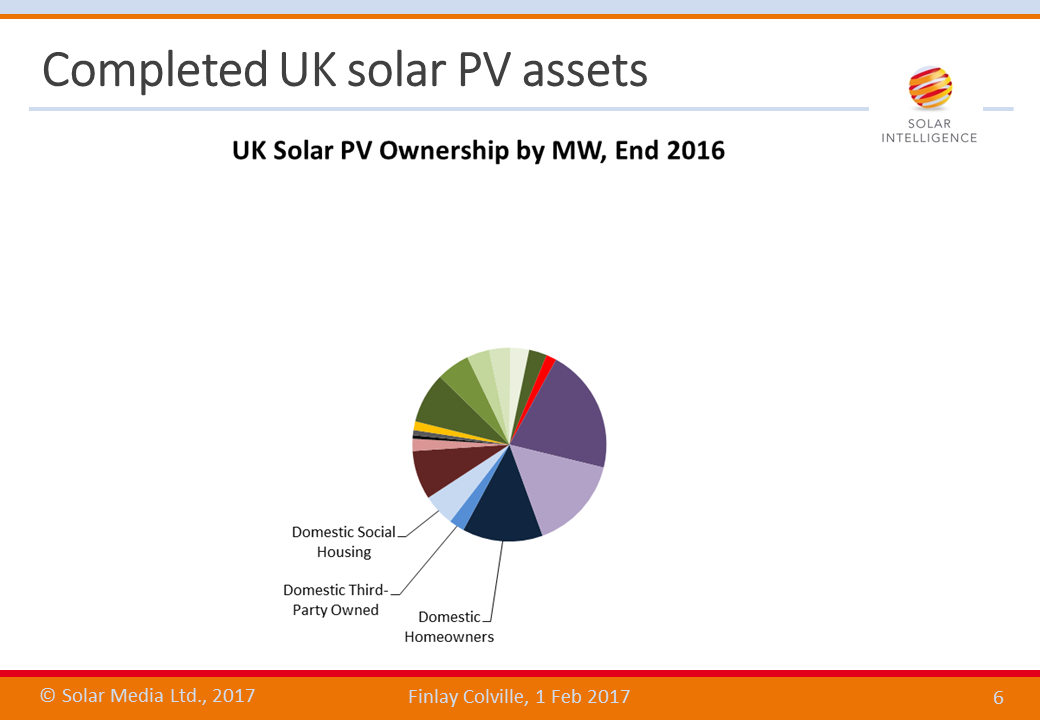 Ownership across the domestic sector can be divided into three types: homeowners (that own the installations on their roofs); third-party companies that were characteristic of the free-solar boom phase when the FiTs were attractive, led by A Shade Greener; and finally, local councils or private housing associations that equipped existing or new-build social housing properties with solar panels. The domestic segment is dominated by home-ownership.

The next grouping (explained across the next four slides) covers the commercial rooftop sector, with the division between small (<250kW) and large (>250kW) installations. 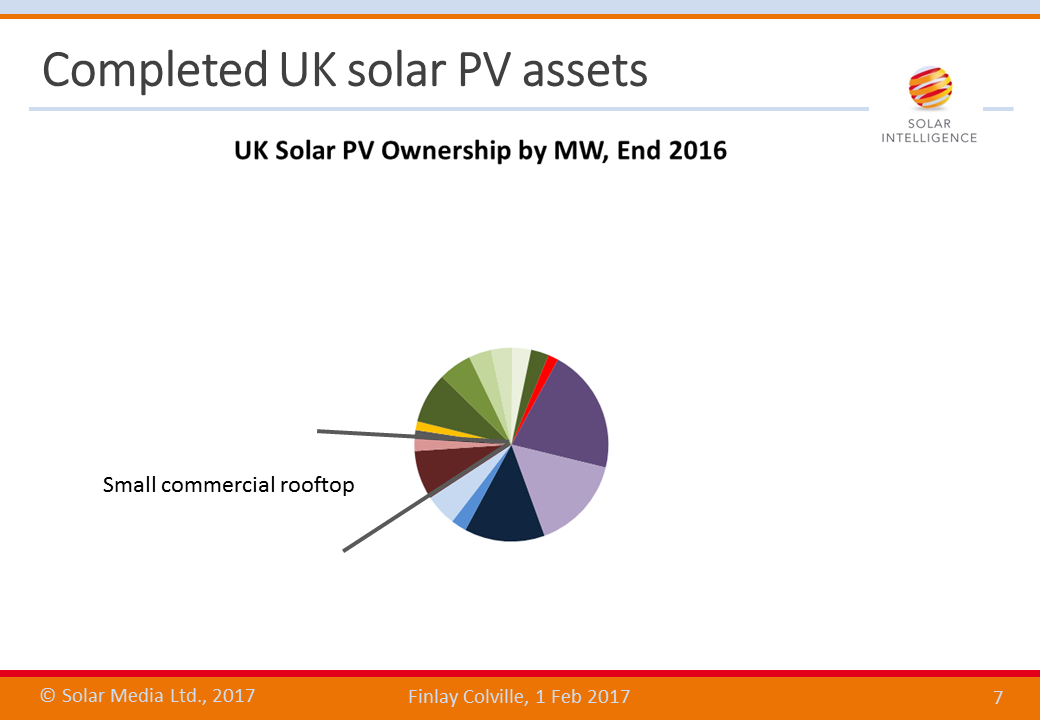 Of the two rooftop size categories (small and large per above definition), the small rooftop segment is by far the largest, having also been a strong driver behind the early rooftop FiT industry growth phase during 2010-2012. In terms of ownership, there are two main groupings. 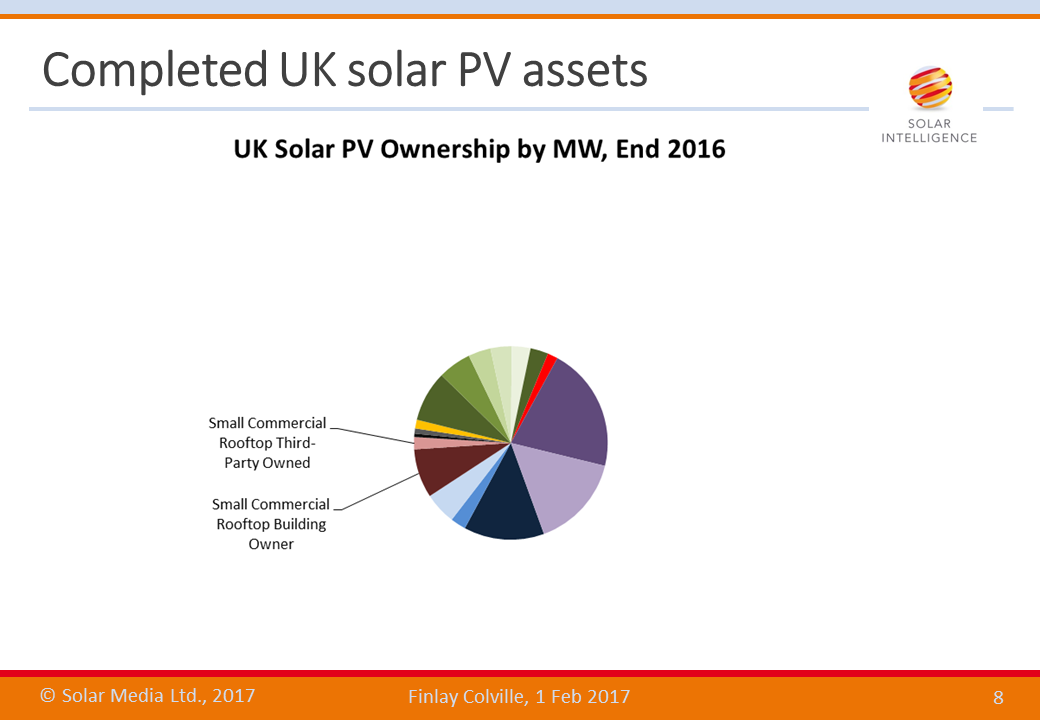 Most of the small commercial rooftops are owned by the owner of the building. Typical installation sizes here are 49.9kW and 99.9kW, with examples including farm buildings, sports clubs, leisure centres, and council buildings.

The other ownership profile for small commercial rooftops comes from various different models where panel ownership was through a third-party. This includes PPA models, crowdfunding, and community projects. 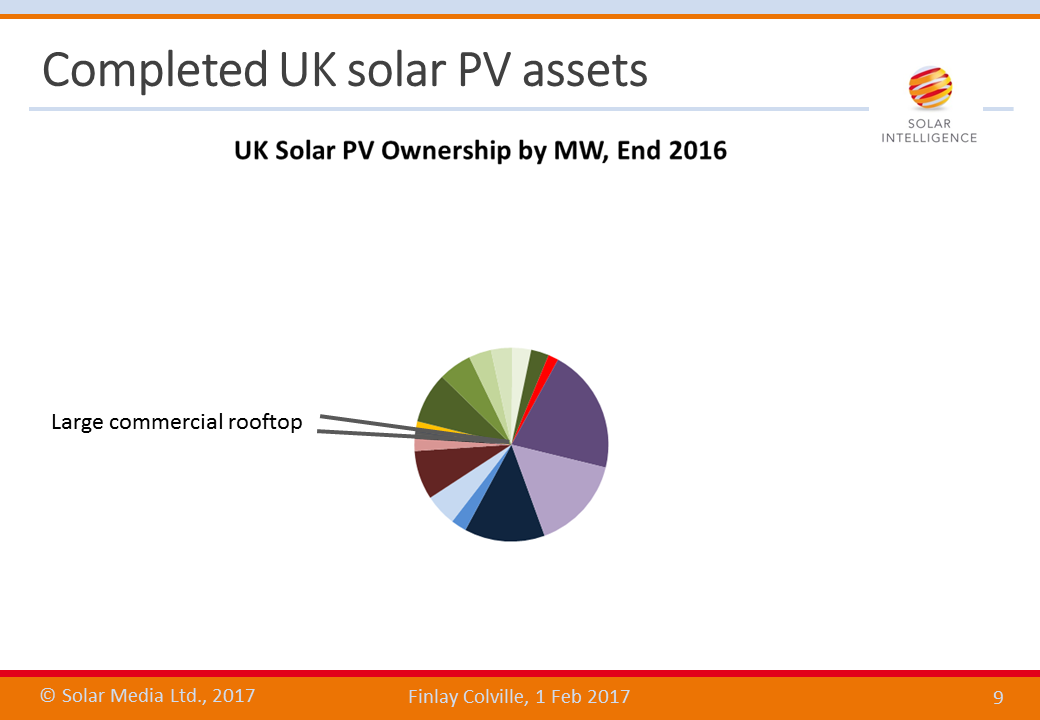 As a dedicated segment, the large commercial rooftop remains the smallest part of UK solar. It is a market that struggled to gain traction in the past for various reasons, and has trundled along almost independent of the FiT and ROC rollercoasters that have impacted other sectors.

The key reason for this is actually the time period for large rooftop plans to come to fruition. Project time periods (from an initial sales pitch to the final installation) can be years, compared to residential projects and solar farms that generally operate with a more prescriptive and known schedule that can be controlled better from the sales side. 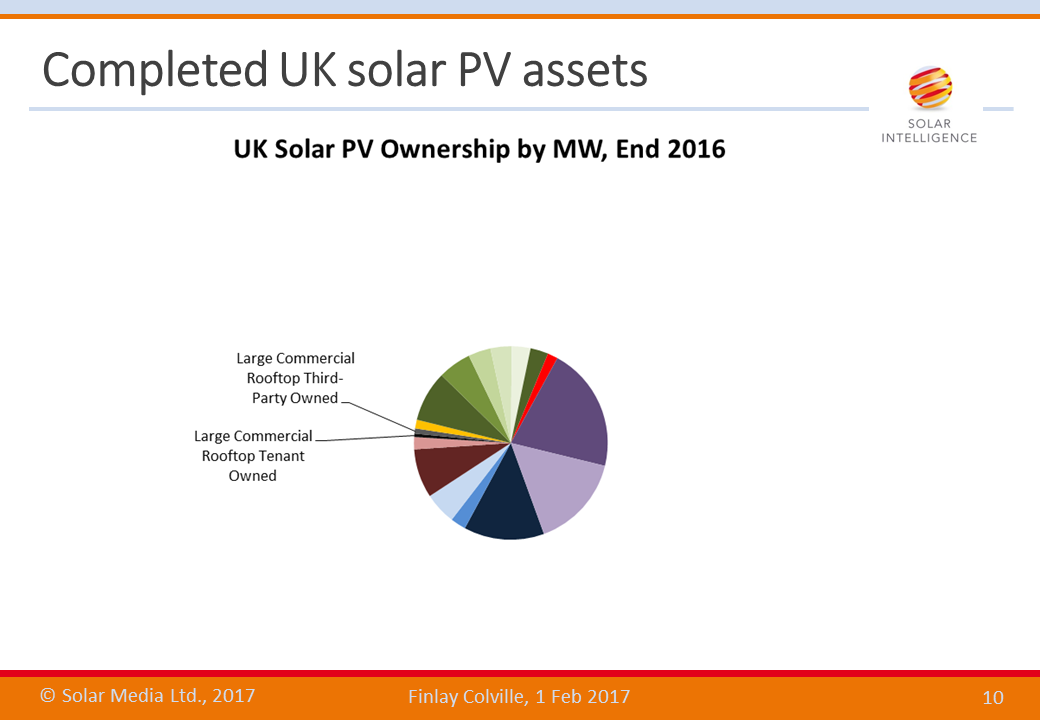 The two large rooftop segments are those based on rooftop/building direct-ownership and external third-party ownership, with third-party owned being the larger of the two segments.

Since each is small within the overall 12GW market size, we defer from any detailed observations at this point. However it is of course worth flagging that the last senior government officials with any outward profile or voiced opinions on the UK solar industry (namely Greg Barker and Amber Rudd) always pointed to large commercial rooftops as the segment they wanted to see pick up the bulk of solar panel deployment in the UK (so long as they were subsidy-free, of course).

One of Greg Barker’s soundbites that may well be requoted ad nauseam by the solar industry in years to come included the rather misplaced and presumptive quote where he stated in 2014 his desire to put ‘rocket boosters’ in place to stimulate the large scale rooftop segment.

Well, the rockets clearly failed to ignite and the large commercial rooftop sector in the UK is still somewhat terra firma. However, everyone in the know was well aware at the time that the government’s agenda was one of panic; hoping that money-grabbing project developers would stop raping England’s green and pleasant land to create solar farms that were going to deplete the uncapped Renewable Obligations funding mechanism faster than the Levy Control Framework could react to stop it.

The second part of the two-part blog series will explain exactly how what the ownership of the ground-mount solar segment looks like. This then concludes with a definitive sizing of the opportunities on hand for secondary market trading over the next 12 months.

6 October 2021
The future is bright for a new era of US solar and storage, and the 8th annual Solar & Storage Finance Summit will provide opportunities to discuss solutions to the industry’s challenges and provide a networking platform designed to bring together the top minds in the industry to do business. With a mix of high-level, informative presentations and panels, a stellar cast of speakers and audience members with deal-making capacity, the 2021 edition of the event will be a sell-out success.
commercial rooftop, finance, large-scale solar, market research, residential rooftop, uk, utility-scale