Despite a significant drop in global renewable energy investment last year, a corresponding rise in renewables deployment spelled encouraging news for the sector, according to a new UN Environment Programme (UNEP) report entitled ‘More Bang for the Buck’.

The drop in investment did not demonstrate a lowering of interest in the technologies, but instead came as an indicator that the costs of renewables are coming down. Indeed, during 2016 there was a 10% drop in average cost per megawatt for setting up solar PV and wind projects. Moreover, investment in renewables was roughly double the amount invested in fossil fuel generation – its highest proportion to date.

The report did however acknowledge a slowdown in China, Japan and some emerging markets as part of the reason for reduced investment.

Notably, the report which does not include large hydro capacity in its figures, was also delivered in partnership with Bloomberg New Energy Finance (BNEF) and the Frankfurt School-UNEP Collaborating Centre. 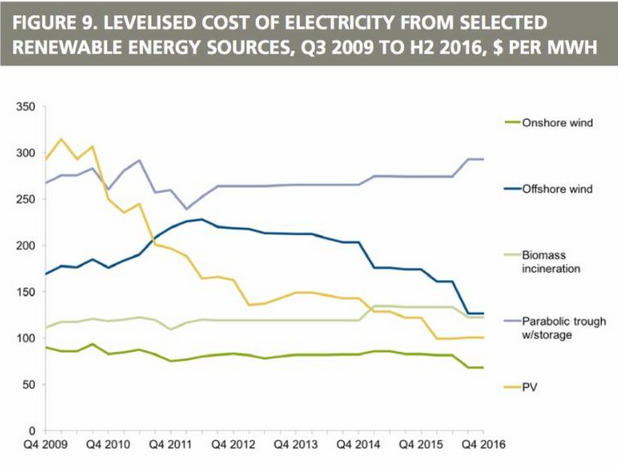 Solar investment was down 34% to US$113.7 billion last year, at the same time as PV installations grew to a record 75GW.

The regions with the most noteworthy tail off in clean energy investments were China (down 32%), Japan (down 56%) and Mexico, Chile, Uruguay, South Africa and Morocco (down 60% or more). This was blamed on lower than expected electricity demand growth as well as auction and financing delays. The US only dropped 10%, while Europe grew 3% and Jordan saw a 148% rise.

There was also record acquisition activity in renewables rising 17% to US$110.2 billion.

Michael Liebreich, chairman of the advisory board at BNEF, said: “After the dramatic cost reductions of the past few years, unsubsidised wind and solar can provide the lowest cost new electrical power in an increasing number of countries, even in the developing world – sometimes by a factor of two.

“Instead of having to subsidise renewables, now authorities may have to subsidise natural gas plants to help them provide grid reliability.”

UNEP also praised the continued raduction in solar tariffs driven by aucitons round the world. Yesterday PV Tech reported that GTM Research was expecting the upcoming tender in Saudi Arabia to potentially drop below two US cents per kWh for the first time.