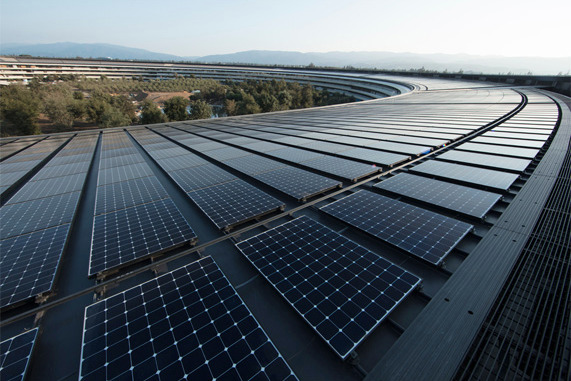 Just a few days after Google announced that it had officially hit its 100% renewable energy goal, rival tech giant Apple has now made the same claim.

Tim Cook, Apple's CEO, said: “We’re going to keep pushing the boundaries of what is possible with the materials in our products, the way we recycle them, our facilities and our work with suppliers to establish new creative and forward-looking sources of renewable energy because we know the future depends on it.”

Apple currently has 25 operational renewable energy projects around the world, totalling 626MW megawatts of generation capacity, with 286MW of solar PV generation coming online just in 2017. It also has 15 more projects in construction. Once built, it will have over 1.4GW of renewable energy generation across 11 countries. Since 2014, all of Apple’s data centres have also been powered by renewable energy.

Among its major projects, Apple’s enormous new headquarters in Cupertino, named Apple Park, will be powered by a 17MW onsite rooftop solar installation and 4MW of biogas fuel cells, all controlled by a microgrid with battery storage. The firm has also developed 485MW of wind and solar projects across six provinces of China to address upstream manufacturing emissions.

“Over the course of 2017, across the globe, for every kilowatt-hour of electricity we consumed, we purchased a kilowatt-hour of renewable energy from a wind or solar farm that was built specifically for Google,” said Urs Hölzle, Google senior vice president of technical infrastructure. “This makes us the first public Cloud, and company of our size, to have achieved this feat.”

Google currently has 26 renewable energy projects around the world, and more in the pipeline.

6 June 2023
Join us in Napa to unlock the key to reliable PV module supply to the U.S. market in 2023 & 2024. We'll also be gathering the main players in the US solar market for some wine tasting!
100% renewables, apple, corporate ppas, corporate social responsibility, corporate solar, energy transition, google, sfi con usa, tech, us, usa