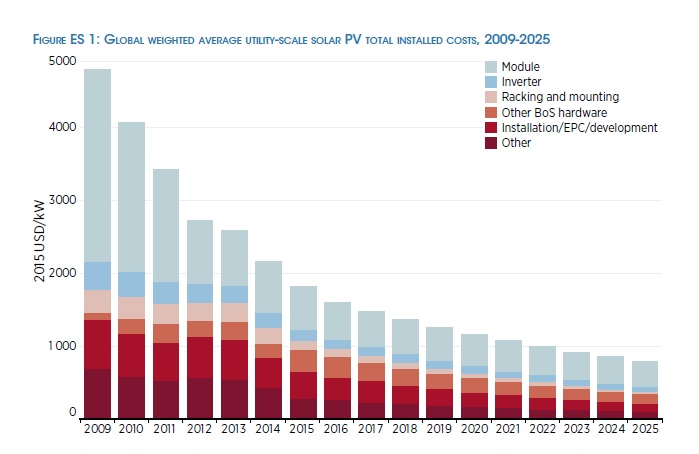 A new study by the International Renewable Energy Agency (IRENA) highlights the continued need to focus on balance of system (BOS) cost reductions for solar PV power plants to continue to expand as a key global renewable energy source.

The report, “The Power to Change: Solar and Wind Cost Reduction Potential to 2025,” believes that average PV electricity costs could decrease 59% by 2025, compared to cost reductions with offshore wind of 35% and onshore wind reductions of 26%.

As a result, IRENA estimates that the global average cost of electricity from PV and onshore wind would be roughly US$0.05/kWh to US$0.06/kWh by 2025.

“We have already seen dramatic cost decreases in solar and wind in recent years and this report shows that prices will continue to drop, thanks to different technology and market drivers,” said IRENA Director-General Adnan Z. Amin. “Given that solar and wind are already the cheapest source of new generation capacity in many markets around the world, this further cost reduction will broaden that trend and strengthen the compelling business case to switch from fossil fuels to renewables.”

The new study reiterates the well known PV module production cost reductions the industry has achieved since 2009, which have fallen around 80% on growing end-market demand and manufacturing economies of scale.

The study points to policy makers needing to understand that future cost reductions are expected to be highly dependent on BOS (e.g. inverters, racking and mounting systems, civil works, etc.) rather than PV modules, despite continued cost reductions expected from modules through 2025.

Indeed, the study acknowledges that module cost reductions could exceed the ‘conventional wisdom of the industry’ that could see module ASPs decline to as low as US$0.28/W by 2025. Current (1Q 2016) ASPs of leading PV module manufacturers are around US$0.57/W.

“Historically, cost has been cited as one of the primary barriers to switching from fossil-based energy sources to renewable energy sources, but the narrative has now changed,” added Amin. “To continue driving the energy transition, we must now shift policy focus to support areas that will result in even greater cost declines and thus maximise the tremendous economic opportunity at hand.”

With a focus on BOS cost reductions IRENA said that the global weighted-average installed costs of utility-scale PV systems could fall by 57% between 2015 and 2025. Larger cost reductions are possible if deployment accelerates and a more rapid shift to best practice BOS costs occurs.

The global weighted average installed cost of utility-scale solar PV could fall by around 70%, driven by continued technological improvements, competitive pressures and economies of scale and the convergence of BOS costs towards best practice levels.

NREL: Cost of solar, energy storage in US fell across all segments from 2020 to 2021

November 4, 2021
The installed cost of solar PV, solar-plus-storage and standalone battery energy storage in the US was reduced across all market segments between 2020 and 2021, with the biggest drop seen in the utility-scale segment.