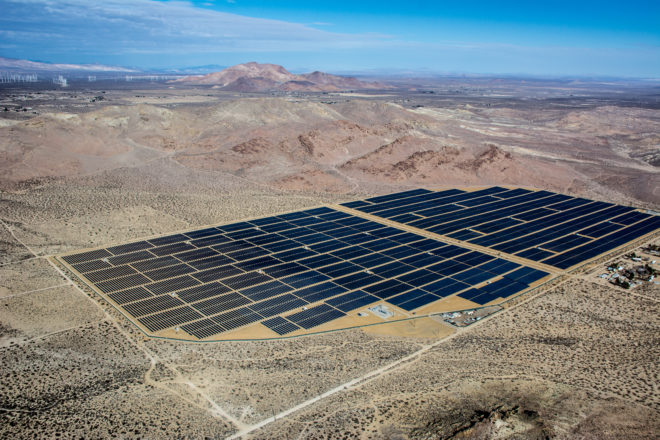 SCVE and MBCP have jointly agreed on and signed two 15-year power purchase agreements (PPAs) for energy produced by Slate, Recurrent Energy’s project being built in Kings County, California. SCVE will offtake 55% of the farm’s combined output, MBCP the remaining 45%. Slate is scheduled to reach commercial operation during 2021. The lithium-ion battery’s output and capacity will be 45MW / 150MWh – enabling up to four hours of dispatchable solar generation.

“With the integrated storage component, both CCAs will have the flexibility to fill the battery when wholesale energy prices are low and then discharge the energy when prices are higher to meet their unique load requirements in a cost-competitive manner,” Canadian Solar’s chairman and CEO Dr Shawn Qu.

“Recurrent Energy was the first developer to close financing for a utility-scale solar project with CCA off-takers and we will leverage this expertise to ensure the project is successful.”

The announcement of the PPAs’ signing yesterday corroborates widely-heard comments at SPI this year that the US solar industry is on its way to making solar-plus-storage the mainstream option for developers of large-scale PV. Nowhere is this being seen in greater evidence than in California, which has a 100% renewable electricity goal by 2045 for its retail markets.

6 June 2023
Join us in Napa to unlock the key to reliable PV module supply to the U.S. market in 2023 & 2024. We'll also be gathering the main players in the US solar market for some wine tasting!
3s solar plus, california, canadian solar, community energy, recurrent energy, solar-plus-storage, us