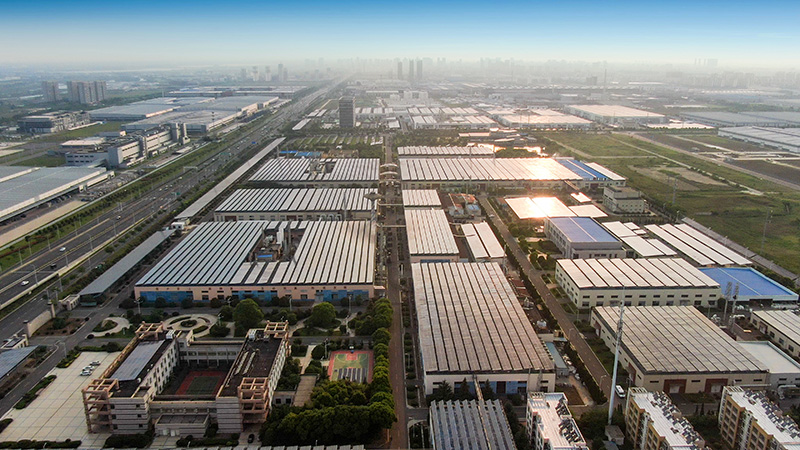 Following on from our recent piece on what is driving the largest ever wave of manufacturing capacity expansion announcements in the PV industry, a few real-world examples may shine further light on this topic.

The first example relates to a small Chinese PV manufacturer that has been around since 2003 and has basically been under many people’s radars for all that time. However, Eging PV has finally woken up to the need to transform its manufacturing operations and undertake gigawatts of capacity expansions.

The second example comes from LONGi Group, one of the most prominent ‘Solar Module Super League’ (SMSL) members, expanding capacity to keep pace with demand and rivals. However, in the case of LONGi, the story highlights a situation where the company could not spend enough of the funds raised to build a 5GW module assembly plant and highlight what their response was to this conundrum.

China-based PV manufacturer Eging Photovoltaic Technology Co (Eging PV) is probably one of the oldest Chinese PV manufacturers (listed in 2004) on a Chinese stock exchange, yet has been in the shadows for the vast majority of that time.

The company has not really added any cell (1.2GW) or module assembly (1.5GW) capacity in the last four years and annual revenue had peaked at around US$733 million in 2016, but has subsequently flatlined at around US$550 million for the last few years. 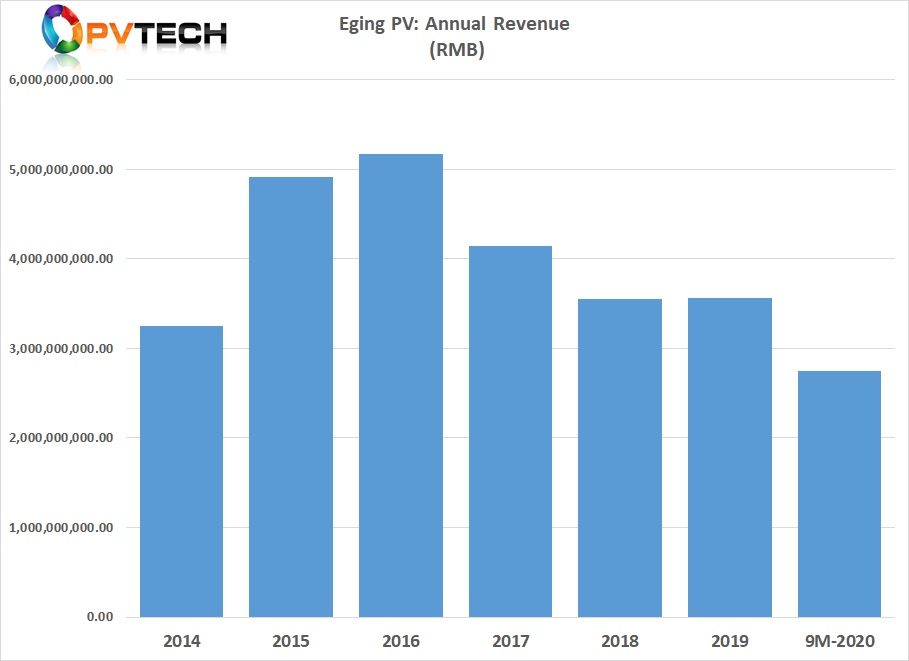 The majority (70%) of its revenue has been generated in China, supplying several large utilities for a range of PV power plant projects, supplemented by overseas supply to approximately 35 other countries. The company also had less than 200MW of directly owned PV power plants in China.

Eging PV announced plans to build a 3GW monocrystalline ingot and wafer production plant in Hohhot, Inner Mongolia at a capital cost of approximately RMB1.0 billion (US$154.4 million). Plans also included a 1.5GW high-efficiency monocrystalline solar cell plant at its existing manufacturing facilities in Changzhou, Jiangsu province at a cost of around RMB600 million (US$93 million).

The company further announced plans to renovate existing module assembly facilities in Changzhou to accommodate a 2.5GW high-efficiency monocrystalline module assembly plant that was expected to cost around RMB320 million (US$49.4 million).

However, Eging PV’s reasoning for the need to significantly increase capacity is revealing, as many companies give the slimmest of reasons for expansion needs.

In regard to the ingot and wafer plans, Eging PV noted in financial filings that the rapid shift to p-type monocrystalline wafers, coupled with large-area sizes with massive scale of new production plants in low-cost (hydroelectric) power regions of China, had meant the company was “faced with multiple pressures such as high electricity costs and obsolete equipment, cost reduction and efficiency enhancement have become the key to the company's steady development.”

When providing reasons behind the solar cell expansions, Eging PV stated in a separate financial filing, “In recent years, competition in the photovoltaic industry has become increasingly fierce, especially in the [solar] cell sector,” adding: “At present, the company’s existing cell capacity has no method to meet the production needs of the company's back-end components [PV modules].”

The company also noted that its R&D team been researching and tracking the mainstream cell technologies in the market for many years but in the future Eging would also adopt such cell technology that was based on market demand. No surprise then that the company is adopting the 210mm wafer size, advanced half-cut high-efficiency PERC cell technology and module assembly technologies catering for large-area modules as well as bifacial and wrapped-up in high-levels of automation.

Eging PV has also reiterated in other related financial filings that the capacity expansion projects were all designed to improve the company’s competitive position in the global PV market.

Finally, 11 months later, Eging PV announced in late December 2020 that it was planning to expand solar cell capacity by 3GW at its Changzhou facilities and add a further 2GW of module assembly capacity. 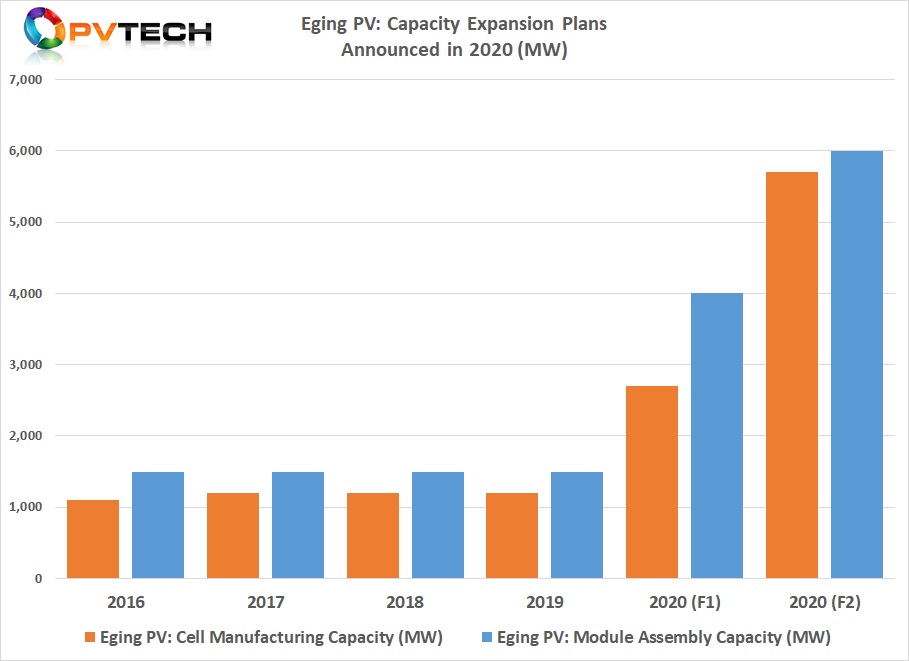 The December 2020 capacity expansion announcements were basically due to the need to expand capacity to meet demand.

Being the largest monocrystalline wafer producer and an SMSL member, LONGi Group is expecting to have PV module shipments above 20GW for 2020. Cumulative module capacity expansion plans could reach 50GW in 2021 with shipments estimated to be in the region of 45GW.

However, back in January 2018, LONGi announced plans to build a 5GW Module assembly plant in Chuzhou and in April 2019, announced a 5GW solar cell plant in Ningxia. Both projects were completed on schedule and remain in operation. Jump forward to January 2021 and LONGi announced that the initial funds allocated to build these facilities had not been fully spent as expected when the plants were in the planning stage.

LONGi noted the reason for the excess funds from the Ningxia cell plant had been due to “technological progress in the industry, the purchase price of texturing, annealing and other processes and automation equipment is significantly lower than when the project was established, greatly reducing the amount of equipment input.”

The company added that the “substantial increase in equipment production efficiency” led to the reduction in quantity of some equipment, compared to the initial planning stage assessment.

This was also true in regard to the Chuzhou assembly plant where the company said the purchase price of stringing machines, automated bus bar welding machines, laminators and other equipment was significantly lower than when the project was established.

LONGi said that it would use the Ningxia funds to build a new 3GW cell plant at the existing site and a balance of US$2.6 million would provide long-term liquidity for the facility.

However, the Chuzhou funds would be used for a permanent supplement of working capital at the assembly plant, rather than for new capacity.

What we have here is a case of capital cost declines due to manufacturing equipment advances coupled to the scale of operations, leading to excess funds used to build more capacity or provide working capital instead of allocating the funds elsewhere or returning the funds in some form or another.