Intersolar 2019: Certainty comes at a price in subsidy-free era 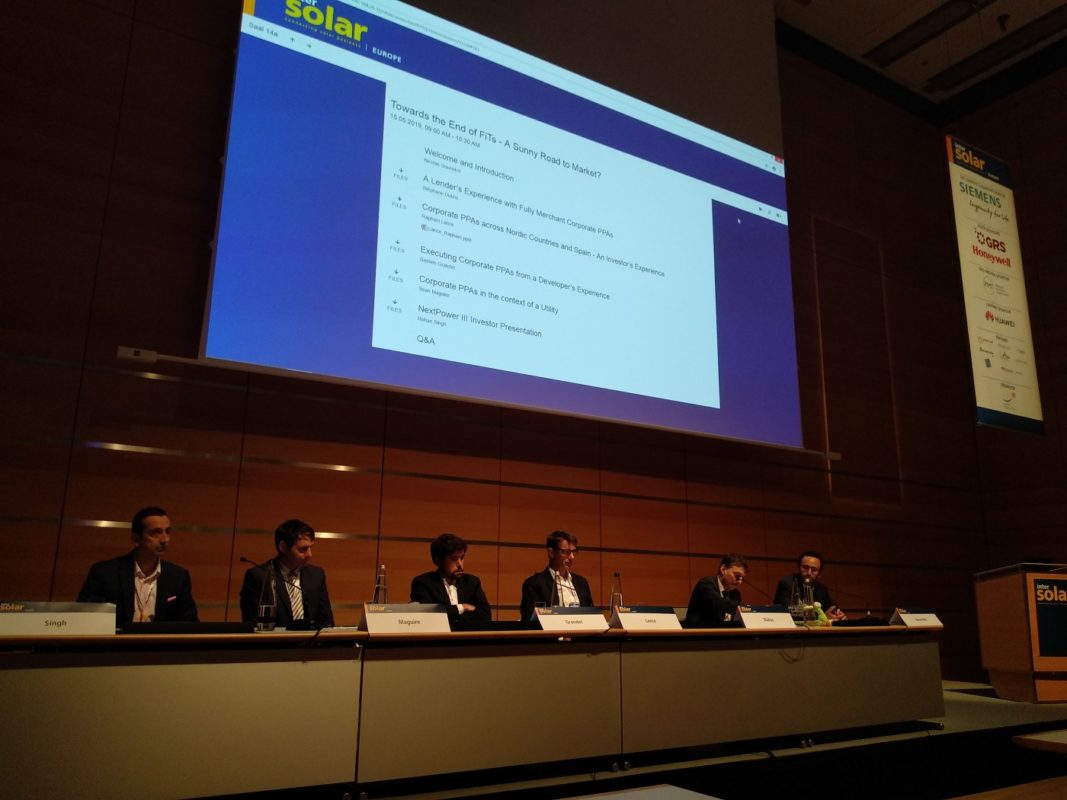 All solar players must accept the uncertainty brought about by a free-market shift if they are to make a success of the new era, the Intersolar Europe conference has heard.

Developers, financiers and utilities took turns at the annual industry get-together in Munich this week to spell out the risks of a zero-subsidy environment, not least tough PPA negotiations and hazy long-term power price forecasts.

“I think people hark back to the old days of subsidies,” Sean Maguire, commercial VP for European PV and wind at Statkraft, told a panel discussion on Wednesday morning. “We hear questions around 10- to 15-year fixed-price PPAs but in a lot of the markets we’re present in, to go that long-term is a challenge.”

“The future remains uncertain,” was how fellow panellist Bastien Grandet, deputy head of financing at Neoen, chose to put it. “Developers have already tried to adapt, not because we’re clever but because we had to. EPCs are following and it’s lenders we see lagging behind – we’ve yet to find a common view on how to deal with long-term merchant risks.”

The talk in Munich of the double-edged sword that is free-market solar – the chance to break free from subsidies, the risk of inviting long-term disruption in the process – echoes discussions at PV Tech publisher Solar Media’s own events.

Aquila Capital, Blackrock and other speakers at the Large Scale Solar Europe summit in March were all bullish on the potential they see in Spain, Portugal and others. Success, it was pointed out at the Lisbon event, will require testing assumptions around power prices and grid constraints.

Speaking at Intersolar this week, Neoen’s Grandet said fast-approaching grid parity is positive; it proves, he argued, that subsidies to solar were well-spent money. However, Grandet questioned how much further technology costs can dive before cannibalisation scenarios become real.

Grid access, Grandet went on to say, will be the defining bottleneck of zero-subsidy solar. “Look at Portugal’s next auction this summer, where people will pay just for the right to connect to the grid. We seem to be going from a subsidised to a reverse subsidy industry,” he remarked.

Given the reservations around auction schemes and the struggle to land long-term PPAs, rising numbers in the solar industry are being forced to mull merchant moves.

Statkraft may have signed the 15-year PPA with BayWa r.e.’s 175MW Don Rodrigo scheme in Spain but has learned, through its own development business, how scarce quality PPAs can be in some markets. According to Maguire, the utility is examining alternative routes, including going merchant and maximising the value of assets it divests under its build-sell-operate model.

“Will merchant solar become the norm? We don’t believe so,” he commented. “But as portfolios grow and subsidies start to fall away, funds and investors may start to look into owning around 20-30% of their portfolios on a merchant basis.”

Speaking alongside him, Mirova managing director Raphael Lance offered a cautionary tale to those unprepared to question long-term forecasts. His firm, an impact investor part of the Natixis group, saw the equity value of two Swedish wind projects halve after power price projections had to be revised downwards.

“Our decision to fix prices for a 5-year hedge with these projects only secured around 9% of the revenues,” he explained. “My advice is be careful with short hedges as they still expose you to a significant merchant share. Market prices can be very volatile.”