Corporate solar financing rebounds in second half of 2020

Corporate investment in solar projects reached US$10 billion in the second half of last year, recovering from economic shock induced by COVID-19.

That’s according to a new report from research firm Mercom Capital Group, which states that corporate funding for the sector rose by US$2.8 billion last year, helped by a surge in large-scale project investment and debt financing.

The figure for 2020 comes six months after Mercom’s half-year report, which warned that corporate solar funding had fallen to just US$4.5 billion in the first six months of the year due to the global health crisis and subsequent economic shock.

A total of 39.5GW of large-scale solar projects were acquired in 2020, but close to half of that capacity was purchased in the last three months of the year, with 15GW of projects purchased in Q4, reflecting a renewed confidence in the solar sector among investors.

The rate of investment in solar projects, which in Mercom's report includes venture capital, private equity, debt financing and public market financing, rebounded significantly in the second half of the year, and rose by close to a quarter (23.9%) across the whole of 2020, despite a slowdown in VC investment. 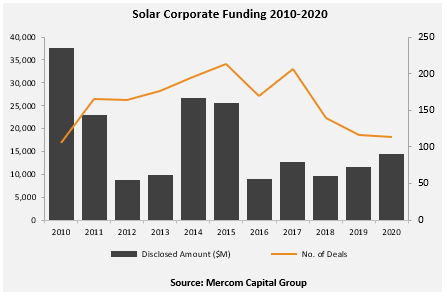 Although just three Initial Public Offerings (IPOs) took place in the solar market last year, they raised US$1.3 billion, equal to the combined value of the 6 IPOs launched in 2019. Technology developer Array upsized its IPO target in October from US$100 million to US$1 billion.

The figures come after a “tough first half” to 2020, according to Marcom Capital’s chief executive Raj Prabhu, who added that publicly traded companies in the solar sector saw “unprecedented” investment growth. Solar exchange-traded funding rose by 225%, he said, while the share price of 15 listed solar companies doubled.

Solar asset acquisitions, Prabhu said, “have become even more sought-after as an investment haven, especially in the uncertain COVID economy.”