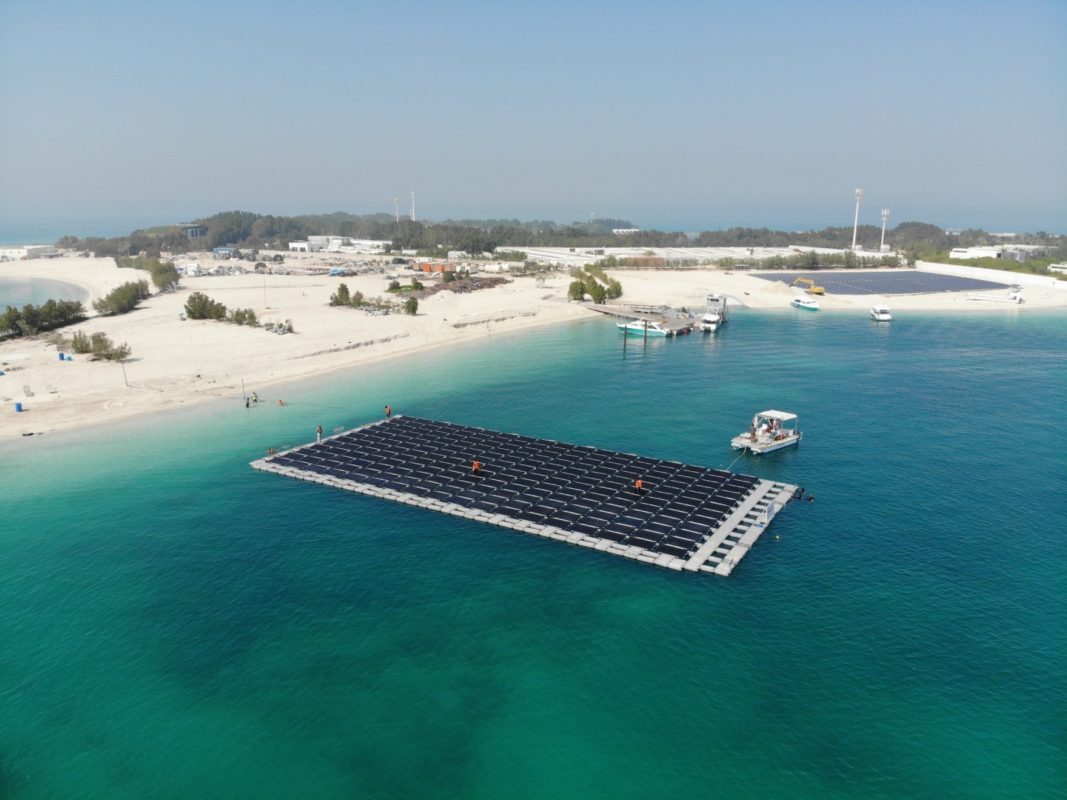 Despite its small capacity of 80kWp, the pilot project’s sea home has created ripples through the industry, given that floating PV has thus far been largely concentrated on inland water bodies.

PV Tech caught up with Enerwhere’s chief operating officer Stefan Mückstein to find out more about the project, which is equipped by bifacial GCL Poly modules and SunGrow mounting equipment.

PV Tech: How did this project come about? Is it the first operational floating PV project installed at sea in the Middle East?

Stefan Mückstein: We have been working with the island, a private five-star hotel resort, since 2016. We opted for a plant in the water to free up long-term space for villas on the beach. We saw the project as an opportunity to learn and understand about floating solar. We believe that there is a huge market for building solar in the near term, specifically in the islands of the Gulf.

We are still in the process of connecting our plant. We have moved it to the anchoring place, but it's not yet connected to the island's mini-grid.

It is the first floating solar project on seawater in the Middle East. I think there are other test sites globally, but there are few and far between. It's definitely not a lot, and none of them are big.

PV Tech: What are the challenges of developing solar at sea?

Stefan Mückstein: Worldwide there are very few floating solar installations on saltwater but we believe that the technology will be ready in the very near term. Part of getting it ready is learning about the challenges posed by corrosion, current and waves.

We prioritised materials that are extremely durable and well-prepared for the marine environment. We took bifacial solar modules that had no chance of letting water enter into them.

We chose a very well-protected site. In a worst-case scenario, we might have to replace some of the floating element if it deteriorates too much, but that's all part of the learning and its totally manageable. Currents are less strong in the Gulf; it’s a relatively protected sea and a good play area to learn. If you wanted to take this to the Seychelles islands or the Atlantic, the currents and the waves are significantly bigger.

PV Tech: Which component suppliers are you working with?

Stefan Mückstein: We used dual-glass modules with IP68 junction boxes designed specifically for marine applications by GCL Poly. The modules need to be absolutely waterproof to survive the constant salt spray from the waves for 25 years.

The floating and mounting structures were supplied by SunGrow, and the anchors and foundations provided by a UAE-based marine engineering firm called Ecocoast.

PV Tech: What is the LCOE of the plant?

Stefan Mückstein: We don’t have exact numbers yet, as we are yet to finish. I can tell you that it’s about three times as expensive than if we were to build it onshore. Our goal is to bring it down to roughly double the price. We don’t think it’s going to ever be the same price, but it is worth bearing in mind that those comparison figures do not include land costs. If you only have extremely expensive real estate, the economics for floating solar become much more competitive.

We expect the cost of floating solar to come down once the market grows and component volumes increase. Costs will also be cut when the design for floating solar is better understood. For example, assembling the plant took us three weeks. We think it will be easy to get that down to two weeks.

PV Tech: Where do you see this type of offshore solar being replicated?

Stefan Mückstein: The cost of such an installation makes sense in places like small islands where electricity from conventional diesel generators can cost as much as US$0.25/kWh. I suspect that in the Maldives the cost of diesel-generated power is even higher than that.

In my opinion, floating solar is a solution in the very, very near term in the Maldives. That’s what we are working towards. Those islands have extremely expensive real estate, and you are competing against diesel generators and diesel shipped in.

We also believe there is a big market in the Gulf. Abu Dhabi has plenty of islands. Dubai has the World Islands [an artificial archipelago featuring various small islands], which are currently not grid-connected and barely anyone is developing them. You could develop a grid for the islands of solar battery generators.

PV Tech: Have there been any big surprises when developing this project?