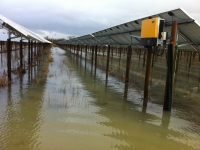 The average severity of insurance claims from the solar PV industry has increased by 87% over the past five years, often as a result of extreme weather, according to new research from renewables insurance specialist GCube Underwriting.

GCube found that weather related losses accounted for nearly half of all solar claims in North America and more than 25% for the rest of the world, in its assessment of the causes and cost of solar PV claims and how they can be mitigated.

Tornados, floods, windstorms and hail damage have all contributed significantly to serious claims, said the report titled ‘Cell, Interrupted’. However, other major factors leading to claims included electrical failure, lightning strikes and theft of components such as copper wire.

Theft has been identified as accounting for more than a quarter of all claims outside North America and is a particular concern for Southern Europe.

GCube noted that annual growth in the solar market consistently exceeds 25% and so an increase in the total number and cost of claims is to be expected, however, the increasing severity of claims means that the industry must invest time and resources to alleviate or tolerate these “sudden and unforeseen” risks to reassure investors and project stakeholders.

This is particularly relevant today as the industry expands into areas that are more prone to natural catastrophe and extreme weather conditions.

Indeed, yesterday industrial measurement firm Vaisala released data showing that solar projects on the US West Coast had seen both their output and revenues hit by the smoke cover from summer wildfires, which is an increasingly common phenomenon.