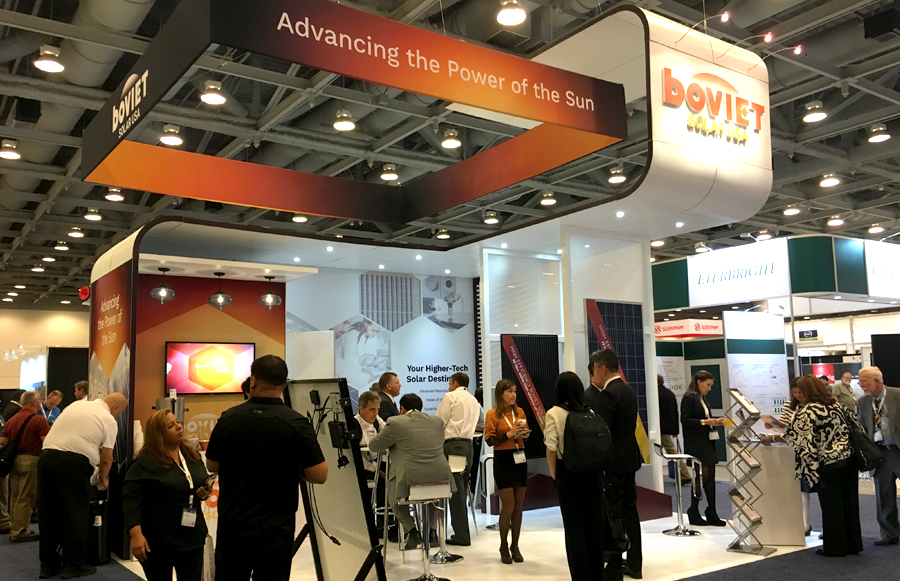 High efficiency modules could be “the future of solar” as module manufacturers are making the move to such technologies to get the most out of solar as prices come down.

“Solar can be deployed anywhere. As we start seeing better capacity in a module, you are going to see solar in more urban areas where it could not go before,” John Beckeris, Boviet Solar’s vice president of finance told PV Tech at this year’s SPI convention in Las Vegas. “That is the future of solar; looking out how we can get more efficiency and wattage out of those cells.”

Taking solar to the next level demands being able to deploy it in areas previously deemed unfavourable for solar, due to either area-constraints or low irradiation levels. High efficiency modules combat such obstacles by creating a better value proposition in such areas by providing more power per square metre, by using fewer modules, which in turn leads to lower costs.

“Module efficiency leverages all aspects of the PV value chain so the higher the power your module is, the lower your installation costs, the more power per square metre and reduced operating costs,” said Solaria’s Adam Detrick, vice president of product development, who also believes that high efficiency modules will still warrant demand regardless of the current climate of overcapacity. “We believe there will remain, regardless of that situation, a high demand for high efficiency product. The one thing there is not excess capacity on is high efficiency. That leverages the value especially in residential and commercial rooftop products – there will continue to be a high demand for high efficiency modules which is where we are focused.”

Solaria and Boviet were among many companies showcasing new high efficiency offerings in response to consume demand for such products, as a signal to where the market is headed.

“As the industry matures, higher efficiency is going to be key to lowering the total installed cost on residential and commercial rooftops,” added Dru Sutton, general manager of rooftop solutions at Solaria.

Not only finding favour with manufacturers and consumers alike, Sutton told PV Tech that installers are partial to such technologies as they require less modules for a comparative or even better output, reducing on labour times and installation costs. This also feeds in to a contingent lower levelised cost of energy by achieving more power per watt out of a standard cell.

“The next phase for modules in the US is really the efficiency factors. When you look at the efficiency, we've come from, at the beginning of the markets, converting 10-12% of light into energy. Now we are in the high twenties. That is where solar is really headed; it is trying to pack more conversion into the same footprint,” said Bereckis.

6 June 2023
Join us in Napa to unlock the key to reliable PV module supply to the U.S. market in 2023 & 2024. We'll also be gathering the main players in the US solar market for some wine tasting!
boviet solar technology co, cell efficiency, module efficiency, pv modules, solaria, spi, us, usa