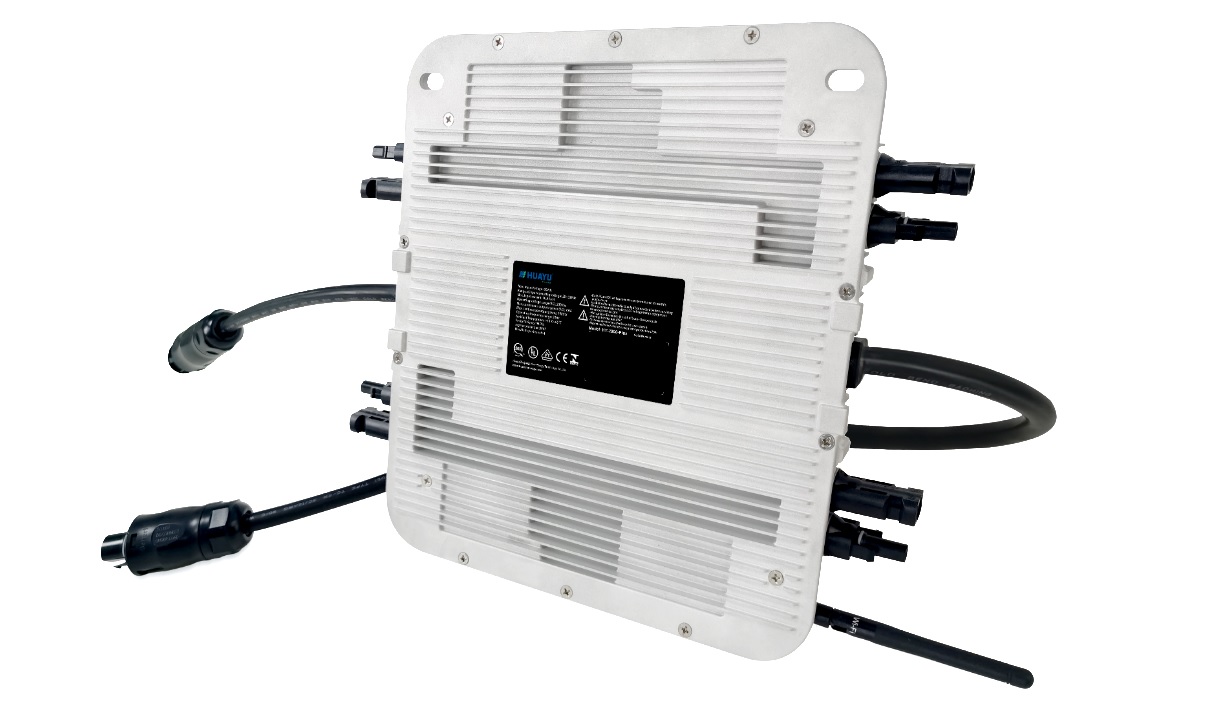 PV inverter specialist, Huayu New Energy, has launched its ‘HY 2000 Plus’ microinverter, which has the highest recorded power density on the market and has four (4) MPPT (Maximum Power Point Tracking) and quad-module-level monitoring as standard. The HY-2000-Plus is also the first commercially announced microinverter that is compatible with the latest 500-580Wp high-performance large-area solar panels that are entering the global market.

Although traditional microinverters have gained market acceptance, notably in the high-end residential markets, the biggest barrier for market growth has been the high cost per watt compared with the traditional string inverters used in residential, C&I and utility-scale PV power plants. In residential rooftop markets, concerns remain with string inverters over how to maintain a balance between cost per watt and operational safety, such as the threat of arc issues. The ongoing challenges of constantly reducing the LCOE (Levelized Cost of Electricity) lead to the need for module-level monitoring, higher power density and inverters that are compatible with large-area solar panels that have 500-580Wp performance.

The HY-2000-Plus microinverter is a cutting-edge design by Huayu New Energy for quad-module applications with a 4 MPPT design. Its power density reaches 554.05W/kg with maximum continuous output power of 2,050W, with a net weight of only 3.7kg, a new world record for microinverter power density and significantly higher than traditional microinverter capabilities, according to the company. Huayu engineers found that, to achieve better power density for microinverters, it was key to eliminate the traditional disadvantages of both string and microinverters, such as the dc input voltage needing to be low enough to assure 100% safety of the solar system. The HY-2000-Plus microinverter has a maximum dc input voltage of 60Vdc in an IP67 casing, compared to conventional string inverters with a rated dc input voltage around 200Vdc to prevent possible arc incidents. In limited rooftop space conditions, systems have to be designed to obtain as much electricity yield as possible and deploying a module-level MPPT solution in this scenario becomes a must, since where module yield is being impacted by shading, only one module is affected in the string with module-level MPPT, rather than the complete string. The HY-2000-Plus microinverter also has a start-up voltage of only 22Vdc, compared to conventional string inverters with a start-up voltage of approximately 40Vdc. This means greater electricity yield in low-light conditions such as dawn and dusk.

Residential and C&I rooftops as well as utility-scale PV power plants with solar panel performance from 315Wp to 580Wp (VOC less than 60V).

The Huayu 4 in 1 microinverter series (2000/1600/1300/1200/1000W) is a combination of high performance and cost-effective design. With 4 MPPT and module-level monitoring, compared with some “4 in 1” microinverters with only 2 MPPT, the Huayu microinverter is one of the few real microinverters which can work based on 4 module-level power point trackers. Integrated AC cable and a built-in WiFi monitoring device make installation easy and investment costs low. Huayu module-level monitoring APPs are available for downloading from the App Store and Google for iPhone/iPad and Android smartphones/Pads. Power output data and failure reports for every single solar panel are shown in real time. HY-2000-Plus has a power density of 554.05W/kg with max. continuous output power of 2,050W and net weight of 3.7kg in an IP67 casing. A 25-year warranty is available.