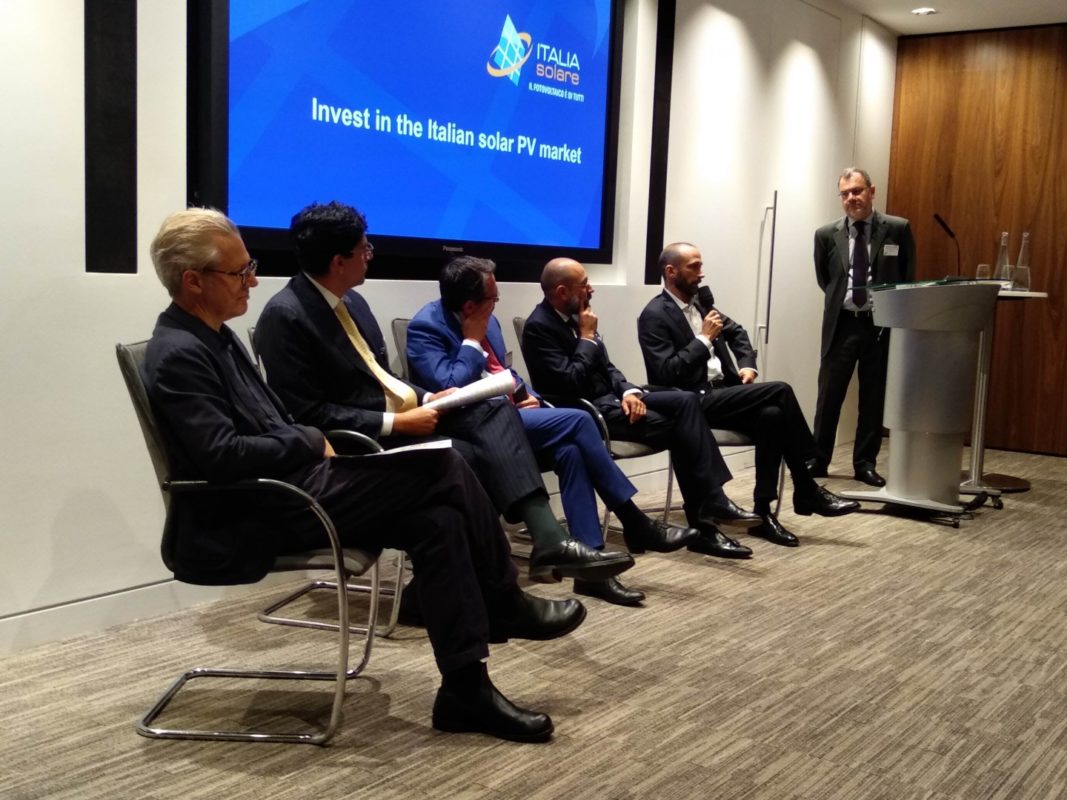 Subsidies are not the answer for Italy to revive its solar industry from the deadlock brought about by the scrapping of feed-in tariffs (FiT), operators have warned at an industry event.

A conference arranged by Italia Solare in London last week saw various industry speakers take the floor to call for a market redesign to allow cost-competitive PV to shine without the need for incentives.

“We are clearly against subsidies,” said Italia Solare’s CEO Paolo Rocco Viscontini, at last Friday’s conference, attended by PV Tech. “We feel solar is absolutely competitive and needs instead the right positioning, in terms of rules, that allows us to compete with fossil fuels.”

Viscontini criticised the €15 billion in subsidies which, he claimed, Italy is pumping into its fossil fuel industries every year. For solar, he added, the situation is compounded by the government’s refusal to allow PV plants to take part in demand response mechanisms or its recently overhauled capacity market.

Promoting PV via subsidies rather than meaningful market reform poses, the CEO went on to say, public image risks. “Politically speaking, there is a chance incentives will be used in ‘fake news’-type of public declarations that if solar is getting support, it’s because it needs it,” he warned.

Italy bets on CfD to take solar industry to 55GW

The London event was prompted by a watershed moment in Italian renewable policies, with the country weeks away from holding its first auction of a scheme to support solar, wind and others with €5.4 billion in contract-for-difference (CfD) incentives all the way to 2021.

The programme – given the EU’s all-clear in June – is meant to help reboot solar growth after years-long paralysis, induced by the axing of FiT support in the early 2010s. Under ambitious government plans, installed PV capacity must surge from 20GW-plus today to 55GW by 2030.

Despite the scepticism over subsidies, claims were made at the event that incentives set out under the so-called Decreto FER could help underpin the economics of solar projects, with speakers predicting PV will likely to prevail over wind in the looming CfD auctions.

As noted by an on-site presentation by lawyer and Italia Solare board member Emilio Sani, the government subsidies – set to come as a premium on top of market prices – will offer PV producers up to €70/MWh-€105/MWh in financial support, depending on installation sizes.

A PPA market ‘on stand-by’

As witnessed by PV Tech, speakers’ caution around subsidies is echoed elsewhere in the solar industry, with Italy’s FiT fallout still casting a long shadow over operators’ memories. Recently quizzed by this publication over BayWa r.e.’s 1-2GW pipeline in Italy, Dr Benedikt Ortmann said: “[Our projects] would be subsidy-free as investors are afraid of relying on government schemes.”

The belief in Italy’s zero-subsidy solar potential – underscored by IRENA stats, placing the country as the G20’s second cheapest PV market – remained apparent among the crowd of asset managers, developers and offtakers attending the London event. At a networking break, a firm speaking anonymously described a recently signed PPA for a fully merchant utility-scale project.

The broader sentiment was that individual milestones have not yet given way to an Italy-wide PPA boom, even if the latter will not be long in coming. Some stressed that bankability remains an issue despite the rising sophistication of PPA structures while a presentation by Stefano Cavriani, founder of consultancy EGO Group, described Italy’s PPA ecosystem as “on stand-by”.

“We’re negotiating with some large customers, some large chemical plants, but they don’t seem really ready to sign contracts. Also, projects are missing, there’s not a really substantial offer on the other side,” he remarked. “But we believe final consumers will be interested for sure – it’s only a matter of time, as the market evolves to become more and more renewable.”

Oliver Ciancio, who specialises in renewable deal origination for energy trader DXT commodities, placed the emphasis on the need to find “solid” counterparties on the user side. “There’s a tendency by large industrial consumers not to look into energy planning many years into the future,” he said. “The other issue has to do with strong balance sheet, examining any sort of credit risks.”

Italia Solare’s event also examined the potential clash between Italy’s ambitions for ever larger solar projects and a reality of cumbersome permitting rules. As Solar Media’s own events have found, site procurement challenges extend to the whole of land-hungry subsidy-free European solar; however, Italy – lawyers have noted when approached by PV Tech – poses unique bureaucracy obstacles.

“The way I see it, Italy’s real bottleneck at the moment is the authorisation process, which is terribly complex,” DXT’s Ciancio commented. His sentiment was underpinned by a presentation by Loris Morsucci of Moroni & Partners, which outlined the patchwork of national, regional and local rules PV players must navigate for building permits, environmental assessments and connection points.

The technical manager advised PV players to carefully plan around modules, inverters and other upstream choices at the design phase, or face having to update components at a later stage and trigger capacity changes they lack authorisation for. This was echoed by Francesco Girardi, chairperson at solar advisory firm Bluefield Services.

“It’s becoming harder to submit amendments in planning applications so there is a need to have a well designed project right from the start,” he commented. “We need to have our say when we enter into the development and planning phases, to make decisions around components and engineering.”