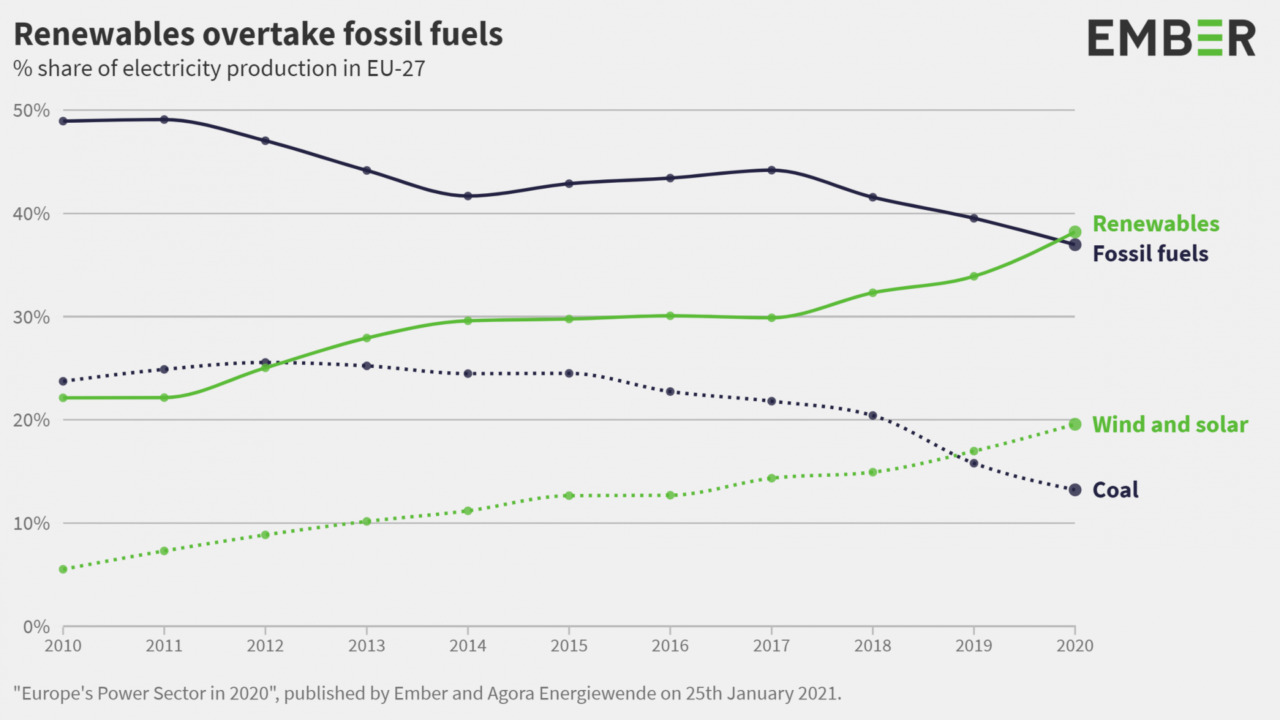 Europe saw its “greenest electricity year on record” in 2020, with renewables generating 38% of the continent’s electricity in 2020, a new report from think tanks Agora Energiewende and Ember states.

Called 'The European Power Sector in 2020', it found that one fifth of electricity was generated by wind and solar plants, while coal power generation fell to just 13% last year, compared with 26% five years ago. However, solar power still makes up just 5% of Europe’s energy mix, the report said, up from 3% in 2015.

Europe’s solar market grew by 11% during 2020, adding 18.7GW of installations with Germany, The Netherlands. Spain, Poland and France leading growth.

The estimate comes after a week of reports predicting a rapid scale-up in solar power deployment across key European markets despite COVID-19 setbacks.  Last week, BloombergNEF stated that between 150GW and 194GW of solar PV would be installed this year, while late last year the International Energy Agency named solar power the “new king” of power markets, stating that in each year between 2022 and 2040 more solar would be deployed than the year before. A further report from software firm Pexapark claimed that power purchase agreements in Europe’s solar sector could exceed 10GW of capacity by the end of this year, following a “frenzy” of corporate deals in markets such as Spain.

Solar made up 144TWh of electricity supplied to Europe in 2020, up from 125TWh in 2019. Wind and solar electricity combined rose by 51TWh in 2020 to 504TWh, but Patrick Graichen, the director of Agora Energiewende, said the rate of growth would need to double in order for the EU to reach carbon neutrality in its power supply. According to Ember’s Vision or Division report published in November last year, national energy and climate plans in Europe currently add up to an average growth rate of only about 72TWh/year.

Dave Jones, senior electricity analyst for Ember and the lead author of the report, called 2020 a “landmark moment” for Europe’s climate goals, adding that countries are “relying on wind and solar” to ensure that fossil fuels are phased out.

The report said that, although it is “encouraging” that wind and solar increased by 51tWh in 2020, it would need to be around 100TWh per year in order to meet climate targets by 2030.

It said that “EU countries need to step up their 2030 commitments considerably”.