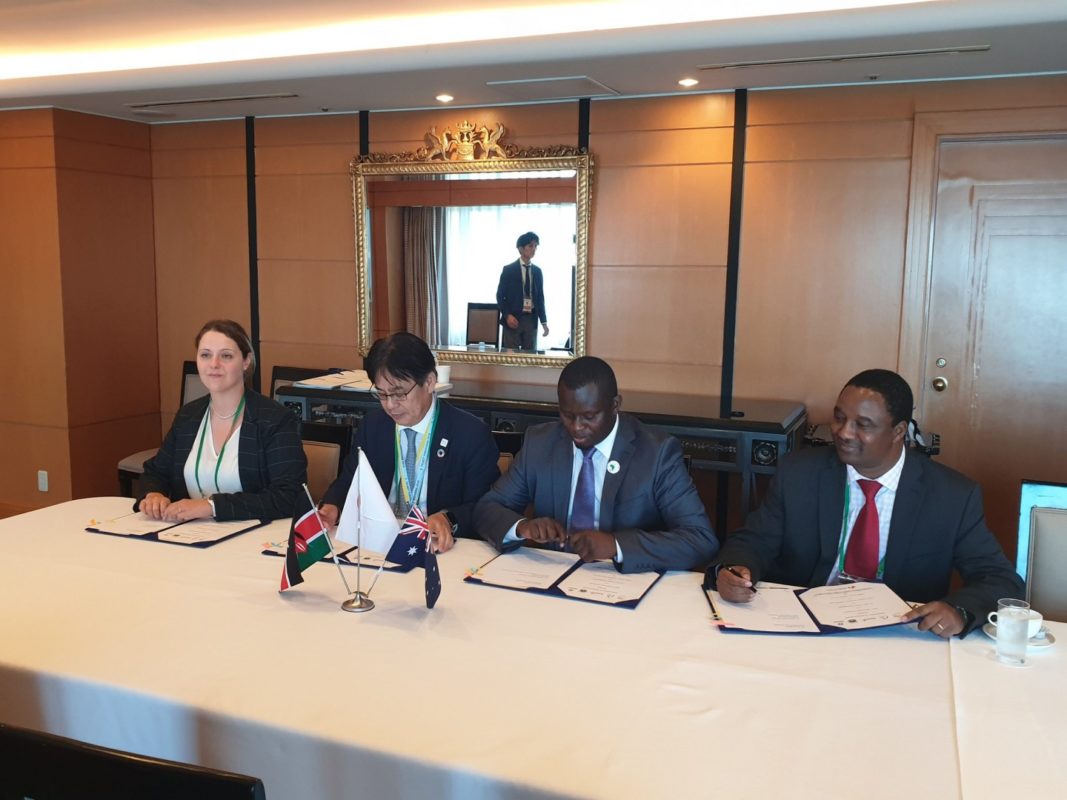 Japanese developer Eurus Energy and Australian-headquartered wind developer Windlab have signed a provisional deal with Kenyan authorities to develop a solar-plus-wind-plus-storage facility with a combined capacity of up to 80MW, in central Kenya.

According to news reports carried by various local outlets, the US$150 million plant will comprise 20 wind turbines and 40,000 solar panels. The facility will be a public-private partnership, and the Meru County government will own part of the project once it is operational. Construction is due to start in 2021.

A memorandum of understanding (MoU) was signed between Windlab East Africa, Eurus Energy, the Kenya Investment Authority and Meru County government on Thursday 29 August at the Tokyo International Conference on African Development, with Windlab tweeting and retweeting photos and commentaries from the event.

According to Eurus Energy Holdings’ majority shareholder Toyota Tsusho, the MoU confirms “the structure of the collaboration between the parties with regard to the development on the Meru County Energy Park.”

Toyota Tsusho, a large trading company built on the automotive brand's foundations, currently has businesses in all 54 countries in Africa, including pharmaceuticals and latterly an emphasis on renewable energy projects. The company announced on 30 August that it had signed 16 recent MoUs with “governments, organisations and groups from 10 African nations, including the Eurus hybrid renewables-plus-storage park.

One other Kenyan renewable energy MoU was signed by Toyota Tsusho directly, rather than by Eurus, this time for microgrid development and signed with the Kenyan Investment Authority and US off-grid solar solutions company Powerhive, which is already active in numerous African territories. The parties will make a “mutual strategic collaboration” to investigate the sustainable development of microgrids.

In addition, Zambia's Ministry of Energy and Toyota Tsusho signed up with Egyptian manufacturing company Elsewedy Electric Co. to look into developing and constructing a solar PV and battery storage project in the country, with an MoU confirming that this would be done “jointly and exclusively”.

The other MoUs from Toyota Tsusho focused mainly on the areas of automobility and next generation transport, with some others in agriculture, ICT, human resources development and science and technology innovation.

At the time, Meru County Investment and Development Corporative chairman Felicity Biriri praised Windlab’s community-driven approach. “Over the recent past, setting up renewable energy projects across Kenya has been difficult as most projects tend to ignore the community in which they implement the said projects,” Biriri said in a statement.

The county government said it was working to ensure all land owners affected by the plant were provided with “valid” title deeds – a process it estimated would finish in November.

In June, a consortium of government and development financiers, including the World Bank and Dutch development institution SNV, unveiled a US$47 million pot for providers of off-grid domestic solar in rural Kenya.