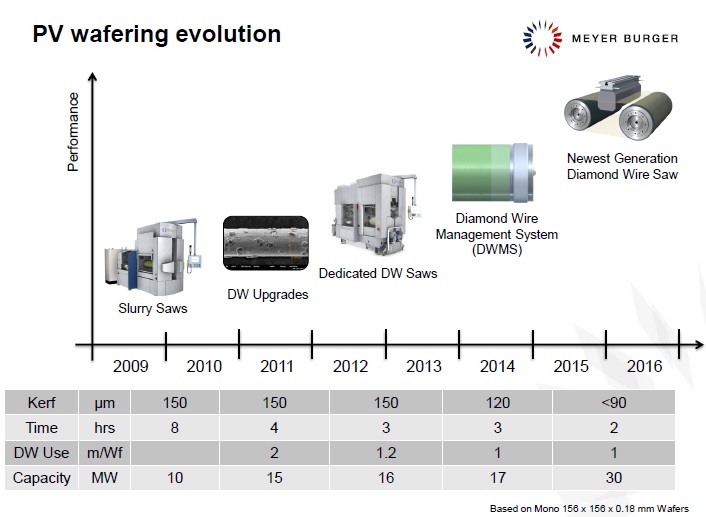 Leading PV manufacturing equipment supplier Meyer Burger Technology said it had been awarded new tool orders from two existing customers in Europe and Asia valued at CHF15 million (US$15.3 million). Delivery and installations are planned to be completed by the end of 2016.

The two orders are for its DW288 Series 3 diamond wire saws and were purchased to increase the production volume of high quality (mono) solar wafers.

Currently, the monocrystalline wafer sector has been in the middle of a new wave of expansions in Asia, primarily in China via LONGi Silicon Materials as well as an upgrade cycle of existing mono wafer capacity to diamond wire sawing to significantly reduce production costs and remain competitive with multicrystalline wafer cost reductions.

25 April 2022
PV CellTech will be held in Europe for the first time! Join us in Berlin to explore the industry transition to n-type mass production. The event concentrates on presentations only; these forming an almost overload of pertinent facts and details to help anyone looking at forming their internal roadmaps for the next few years regarding PV technology trends.
diamond wire, meyer burger, monocrystalline wafer, pv celltech