Each major change at a top PV company will inevitably become a catalyst for revolution within the PV industry. In the past few years, upgrades in wafer size, cell efficiency and module technology have all been closely tied to module manufacturers at the multi-GW level.

In 2019, Jinko Solar ranked first in global PV module shipments for the fourth consecutive year. As the largest vertically integrated PV manufacturer in the world and being one of the few with a balanced layout, the company’s every move has caught the eye of those both within and outside the PV industry. Having significantly accelerated its transition to mono technology in recent years, Jinko completed this mission to a large extent in 2019, with shipments of mono modules jumping to over 70%.

The critical capacity expansion plans announced by Jinko last year were all centered on mono. As a company dedicated to the mono age, Jinko is moving fast in building a soon-to-be-launched 8GW production base for high efficiency modules and has also invested in a 25GW mono pulling and squaring project in Leshan city.

Farewell to poly for a balanced layout

At an investor conference organised by Jinko in 2019, the company’s CEO Kangping Chen pointed out that, “We are ahead of our rivals in this poly-mono transition because we are keeping our eyes open to what the market is telling us. Jinko will further increase its investment in R&D and expand high efficiency production in 2020, aiming at a higher shipment target of 18-20 GW this year.”

Of the 20GW shipments, the vast majority (estimated to be close to 100%) will be converted into high efficiency mono modules, at which time the company will have completed its poly-mono transition. Jinko's commitment to the mono transition has sparked heated discussions over its capacity updates.

Jinko revealed that new capacity built between 2016-2018 accounted for, respectively, 73%, 59% and 50% of the overall total in each of those three years. In terms of capacity ratio, Jinko is taking a prominent role among the major module manufacturers, with outdated capacity not an issue, as can be seen from the decline in new additions.

Hao Jin, Jinko’s CTO, told PV Tech in an interview: “First of all, everyone must invest in the renovation of old production lines and, in particular, in new capacity expansions. Secondly, some outdated capacity can be upgraded as required. For example, conventional cell lines can be retrofitted to produce high efficiency PERC or TOPCon. Finally, never hesitate over phasing out outdated lines. If a product fails to deliver a better customer experience, then it shall be out as soon as possible. For example, conventional poly cells.”

This is the guiding principle for each of the company’s module series, ranging from the Eagle, Cheetah and Swan to the latest Tiger and N-type all-black. Incorporating state-of-the-art technology, each series has its own distinctive features.

Taking the Tiger module as an example, Jinko’s choice of wafer (163mm) is completely different from the other current mainstream trends (166mm and 210mm).

“We’ve made this choice based on customer experience and product compatibility with the whole industry chain. Similar to the 158mm Cheetah, the 163mm Tiger is suitable for most of the existing capacity within the PV industry. On the one hand, the 163mm helps improve the output, efficiency and customer ROI. On the other hand, there are no bottlenecks for this dimension in supporting existing capacity, including equipment and auxiliary materials. Aided by the new tiling ribbon solution, 163mm has delivered a better customer experience in terms of product appearance and ROI, ” Jin continued.

The conversation with Jin made it clear that, instead of following popular trends, Jinko has its own clear planning on technology investment in the market. Already well-established in module supply, its renovated production lines have enabled the company to produce massive quantities of high efficiency cells at fast speeds. The landscape of the PV industry will be changed significantly as a result of improved module competitiveness.

According to Jin, even if the consolidation of some companies is unavoidable, if the PV industry can benefit from such developments in the long run, then the early costs incurred could be quickly recovered. Technology innovation is the force driving the PV industry forward. Reflecting on the past is of course useful, but looking ahead is far more important.

Stories behind the world records

Jinko is not simply a module supplier, having rewritten records of solar cell conversion efficiency 12 times. That many milestones speak volumes about the company’s technology strength in wafers and cells. 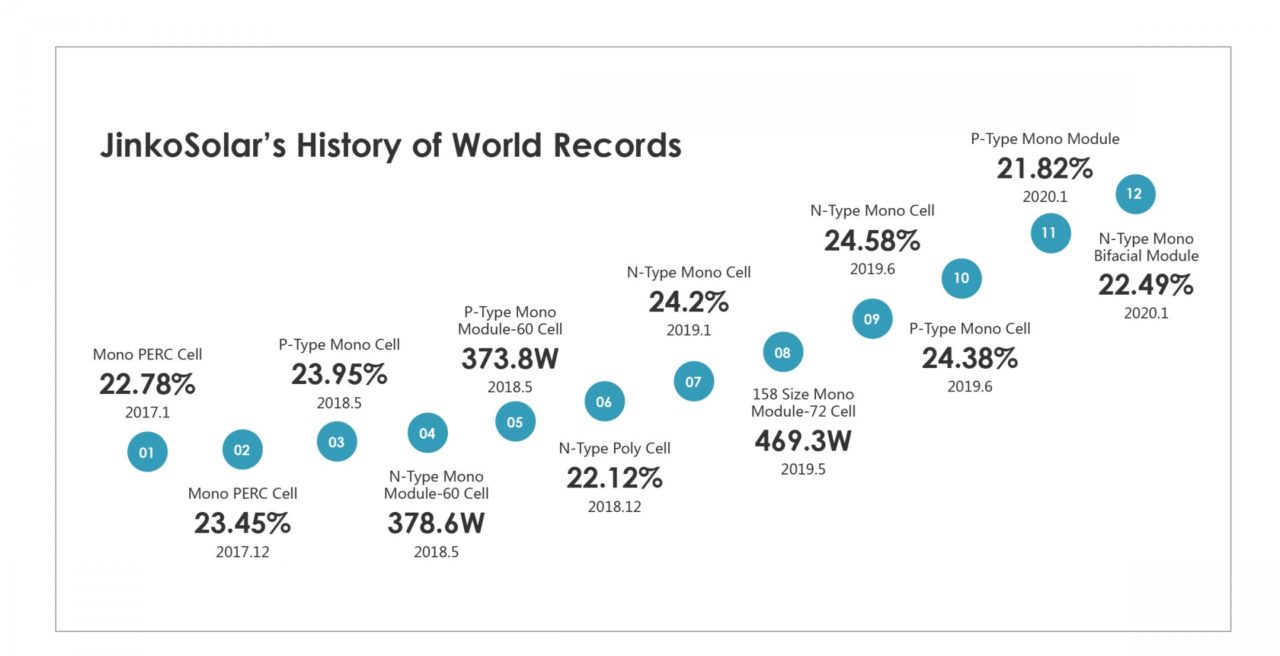 Jin continued: “We never stop innovating high efficiency cell technology and that’s the very reason behind these new world records. We’ve done a lot of research into N-type mono products. New records in mono and N-type are expected to come out quite soon.”

Improving cell conversion efficiency has been one of the primary cost reduction methods adopted by the PV industry over the past two decades, with high efficiency (＞20%）cells being among the major technology innovations.

Jin believes that, enabled by efficiency gains, there is great potential for cost reduction. “In recent years, cell efficiency has increased at a faster pace than ever. Prompted by the ‘Top Runner’ program in China, efficiency has been improved significantly with the advancement in PERC and N-type technologies.

Jinko’s cell production lines are mainly comprised of P-type (＞90%) and some N-type. Jin estimates that N-type will become more popular in the future and the company has already made early plans for that development.

Module conversion efficiency is also of great importance to Jinko, with energy density emerging as the main theme of its module R&D.

“Taking a mono module as an example, if the cell conversion efficiency can be increased by about 0.6% per year, then the module cost will be reduced by 3-4%. Similarly, increased module energy density will also help reduce BOS costs.

“We will focus on technologies which are more conducive to the future development of high energy density products. We are also working on other viable products along this technology route.”

Jin went on to say that the Cheetah and Tiger module series, both of which boast high energy density, have contributed significantly to module efficiency and BOS and module cost reduction, resulting in the Tiger module being in great demand in the market.

The Tiger module integrates 9BB, half-cut and tiling ribbon solutions, with minimum changes in size and weight. Encapsulating 78 cell chips in a conventional 72-cell module, this p-type mono module can raise average efficiency to around 20.93% and average output to over 470W.

Bifacial to top 50% in three years

Jinko’s latest bifacial module set a new world record in January 2020, with an efficiency gain of 22.49% on its front side.

In combination with its tiling ribbon solution, the module uses high efficiency mono cells and backsheets made with DuPont’s Tedlar PVF transparent film. The output on the front side can reach 455W and the efficiency gains on the back can reach 25%.

Jin concluded, “I believe in about three years, bifacial products will dominate more than half of the market. This is where the PV industry is going. The energy generating performance of bifacial products is well recognised and transparent backsheets have played a significant part in this. Both technically feasible and being capable of reducing module weight, transparent backsheets also allow for substantial cost savings, that’s why they are our preferred choice on many occasions.”

The global PV manufacturing landscape is currently being restructured by industry transformation and technology change. Driven by accelerated technology innovation, PV players are launching differentiated product solutions. Will Jinko succeed with its bet on bifacial technology? Let’s wait and see.

14 June 2022
Join us in Napa to unlock the key to reliable PV module supply to the U.S. market in 2022 & 2023. We'll also be gathering the main players in the US solar market for some wine tasting!
bifacial, celltech, innovation, jinko solar, manufacturing, module, moduletech, r&d, technology

May 11, 2022
Live coverage the opening day of Intersolar Europe 2022 from PV Tech's editorial team on the ground at Messe München.