In August 2019, a team at BayWa r.e. began construction of its 14.5MWp Sekdoorn floating solar project near the town of Zwolle in the Netherlands. Just eight weeks later, it was complete, 40,000 solar panels afloat on the former sandpit.

The project was the company’s third floating solar farm in the country, built with Dutch subsidiary GroenLeven, following on from the 2MWp Weperpolder project in Oosterwolde, and the 8.4MWp Tynaarlo plant in the province of Drenthe. With 25MWp already built in the Netherlands in less than one year, and its biggest project yet, the 27MWp Bomhofsplas partway through construction, BayWa r.e. now claims to be one of the biggest floating solar developers in Europe.

The secret to its rapid build-out is a bespoke floating platform for the modules, designed by German engineering company Zimmerman PV Stahlbau. The decision to design an entirely new floating plant concept came about following careful consideration of those already on the market, explains Franz Krug, project manager of Zimmerman: “We found that that other structures all look nearly the same, so they had the same advantages, but also the same disadvantages.”

The Netherlands was chosen as the location for the company’s first floating PV projects since BayWa r.e’s partner company GroenLeven had already secured tariffs for installation on various lakes. The Dutch feed-in tariff (SDE+) is relatively high, meaning that there was still a working business model in the Netherlands for floating PV despite the higher cost of the floating installation compared to ground-mounted systems.

The system’s stability is the main difference between the Zim Float system and others on the market, explains Edgar Gimbel, head of power plant engineering at BayWa r.e. “We built a special boat, which is 12 modules packed in two floaters on a steel frame, which is very stable. Other systems on the market all have one floater on one module, which connect floater by floater, making them very flexible,” he says.

“We are 100% safe on the electrical side. Nobody else in the market has this yet,” says Gimbel.

Krug adds: “Floating solar is quite young technology and for our first project we wanted the verification of a third party, that what we developed fitted with VDE, the market standard.”

The cabling design is kept completely out of the water, hidden under the subconstruction of the floating boats, so that cables are protected from the sun, and have only minimum contact with the water. This guarantees a longer life, as well as easy maintenance. The transformer station is also integrated into the floating system and is VDE certified. 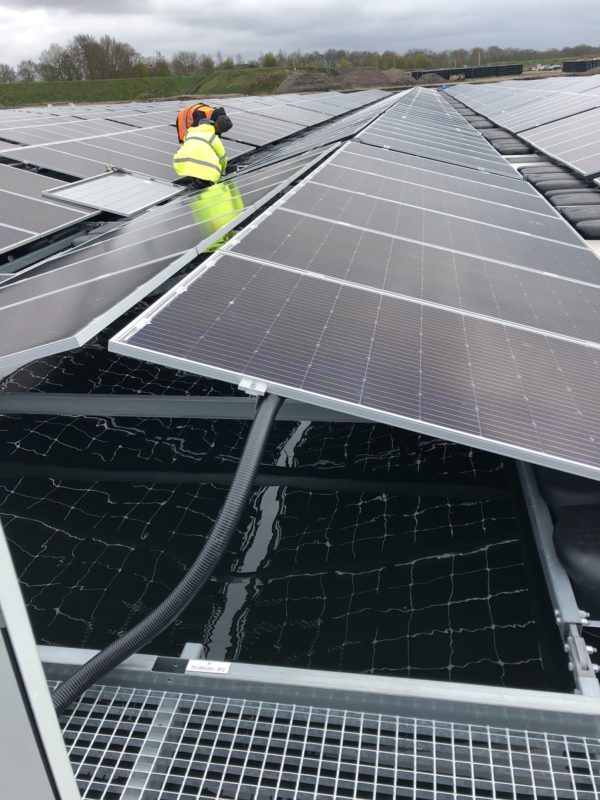 The system is built onshore, including the floaters, steel frame, modules and cabling. Up to nine of these “boats” are then attached to together in a kind of “roller conveyor”, after which the system is floated out onto the water row by row. A small motorboat is then used to take each row out to its final location on the water.

Prefabricating the system onshore is another key difference to other systems. Typically, these are partly constructed onshore, where modules are attached to floats, but installation of cabling then occurs on the water.

“Prefabrication makes it much easier to install, we are able to build up to 1MW per day, which is roughly 2,700 modules. It’s like building a car in a factory, it’s a lot of automised stuff,” Gimbel says.

He is so confident in the system that he is predicting that the 27MWp Bomhofsplas project, also in Zwolle, will be complete in less than two months.

April 7, 2021
Dutch energy firm Eneco is aiming to ramp up its solar energy portfolio in both the Netherlands and Belgium as part of an updated strategy aimed at accelerating the energy transition.

How solar can bring SMEs into the power purchase agreement fold

April 1, 2021
As the solar industry has matured and sustainable investment has moved up on the global market’s list of priorities, power purchase agreements (PPAs) have become a mutually beneficial arrangement between developers and the corporate world. But SMEs have remained difficult to cater for in comparison to larger, more bankable offtakers or utilities with permanent facilities. Edith Hancock explores how this might be changing.