PV module manufacturer, Seraphim Solar System Co was established back in 2011 and PV Tech has known the company from its formative years. Yet, there have been periods in the past when things went almost silent on the news front, not helped by the fact that the company has remained private over the years.

However, Seraphim Solar has steadily increased its profile again since 2018 and has picked up that pace since the second half of last year, announcing new overseas manufacturing in places such as South Africa as well as major module supply agreements to projects in the Ukraine to Australia.

On the technical side, Seraphim Solar has stood out in the past for being one of the first PV module manufacturers to obtain module reliability certification through TUV SUD’s ‘Thresher Test’ program and only last year obtained IEC CTF (Customer Testing Facilities Certificate) accreditation from TUV SUD, only the third company the testing firm had awarded such certification for lab facilities, adding to certifications from the likes of CSA, CNAS and CTC.

In recent years, Seraphim Solar has been listed in the BloombergNEF ‘Tier 1’ bankability rankings with module production capacity of over 4GW as of the first quarter of 2019.

Therefore, there was good reason to meet and get a fresh insight into Seraphim Solar’s business and strategy with Jun Zhuge, Executive vice-president, Seraphim Solar during the recent Intersolar Europe.

What European markets are you expecting strong demand from in 2019?

Jun Zhuge, Executive vice-president, Seraphim Solar: “We are seeing a pick-up in demand from countries such as Spain, The Netherlands, Belgium, Germany and even Poland is showing signs of a pick-up. We have been active with customers in the Ukraine since supply modules to major PV projects last year and we have signed supply deals for a second phase of projects this year, so Ukraine is very active for us.”

What countries in Europe have weak demand as countries such as Poland which has been slow to take-up solar?

In fact we have already had meetings with three customers from Poland at Intersolar, related to distribution partnerships, which was very interesting considering the low installation levels over the last 5 years, especially when there is no policy support for solar. The interest applies to residential, commercial and utility sectors. Grid parity could be the driver in Poland as customers were highlighting the growth opportunities over the next few years.

Can you provide an update to the business?

A key development was move by the company to also include solar cell production, after many years of focus on high-quality and reliable module production, primarily in China.

With tariffs in US and EU we started expanding our footprint overseas since 2015, and this recently includes solar cell production.

Another key development was to begin downstream project development as a business unit of the company. This has been supported by being a BNEF Tier 1 and having bankability status. This has also meant our modules supplier to customers are also bankable and we have not had any issues in that regards.

We signed a five-year partnership with China Power in late 2018 to undertake PV projects together or with EPC firms, supported by project finance and the supply of our PV modules and potentially through China Power to acquire those projects after completion. We have been active in this strategy and have a project development partner in Spain with several projects underway and several others, including a 300MW signed PPA project in Latin America. In total we are expecting our project development business will install around 880MW in 2019. We are wanting this project business to be like an OEM foundry business, like Foxconn for example.

The company announced the establishment of a cell and module assembly plant in South Africa, what was the driver behind this?

We have announced a 500MW solar cell factory in the Coega Industrial Development Zone of Port Elizabeth, South Africa, along with 200MW half-cell module assembly expansion in Eastern Cape. The new solar cell factory we believe is the first in the African continent. The new factory and expansion is co-developed with the Industrial Development Corporation of South Africa (IDC), and we expect to begin commercial operation in the third quarter of this year. Seraphim already has 500MW of module assembly in the country. We have been very pleased with the technical training of the recruited staff and the productivity.

We are also putting two module assembly production lines into Vietnam from China to broaden our overseas footprint. Both countries provide access to the US market and our customer base there.

However, we are also planning to build manufacturing in Indonesia via a local partnership, which will include solar power plant projects. We expect this to be the start of better levels of PV installations in the country when everything is up and running. Indonesia will also provide us with access to the US market. Initially we plan 300MW of solar cells and modules in Indonesia for next year.

This strategy is designed to enable us to continue to expand our manufacturing capacity, serving local markets and overall business stability with a global footprint in both the upstream and downstream businesses.

What is the current production capacity of Seraphim?

At the beginning of this year, as noted in the last BNEF report we had a total PV module manufacturing capacity of 4GW. By the end of May, [2019] we will start ramping a 1GW plant in Lu’an, China with our partner Shanxi Lu'an Photovoltaics Technology Co. This partnership provides access to solar cell and module capacity as the lead partner and provide further support the growth of the company. Overall, when these expansions are complete, would enable a solid global supply footprint to us.

After many years of being a module assembly manufacturer, why the shift to cell production when there are several major merchant cell manufacturers and an ongoing technology race to high-efficiency mono-based products such as PERC and post PERC technology?

When the migration to mono PERC picked-up there was a lot of demand for high-efficiency cells. However, supply was very limited, due to the demand and lack of capacity. We decided at that moment to secure our own cell production using PERC, half-cell and bifacial. This is a key part of the partnership with Lu’an.

We are currently using 156.75mm x 156.75mm P-type mono wafers and plan to remain competitive by migrating to larger wafer and cell sizes such as 158.75mm x 158.75mm through Lu’an. We have already started that process.

The reason we do not want to go too large is due to much of the PV industry preference, we believe that is over 80% of manufacturers going for this size as module dimensions get much larger and weight is heavier going to even larger sizes being offered over the next few years. Other issues start to appear such as module mechanical loading and handling in the field. With the importance of our OEM business we think it is better staying with the mainstream.

Another reason for selecting the 158.75mm square wafer size is the close module dimensions to past standard 60-cell and 72-cell modules, providing retrofit and retention of existing manufacturing equipment.

When you look at the Japanese market which is a strong market for our products, we use smaller modules, due to the residential rooftop sizes and better ability to maximize limited rooftop space. Going to very large wafer sizes could prove difficult in such markets and we are not seeing requests for larger modules in other markets such as the US.

Seraphim also supplies to the utility-scale market so what module trends are you seeing?

We expect mono-PERC modules to become dominant in the market but we are also seeing this year a lot of EPC and utilities using mono PERC bifacial double glass modules in PV projects. There have been bankability issues surrounding bifacial modules, due to rear-side performance variability but we have seen companies establish test sites to provide more accurate measurements from these field test over half and full-year periods. We are supplying our modules to some of these in Spain and Brazil, for example. Some of these projects include trackers. Some of these developers have more than a gigawatt of planned projects in 2020 onwards using bifacial and trackers. These are the trends we are seeing and these would also be half-cut cell and module.

What sort of module shipment levels are you expecting in 2019?

In 2018, we shipped well over 2 gigawatts modules. For this year we could possibly do better, something like 50% higher in 2019. 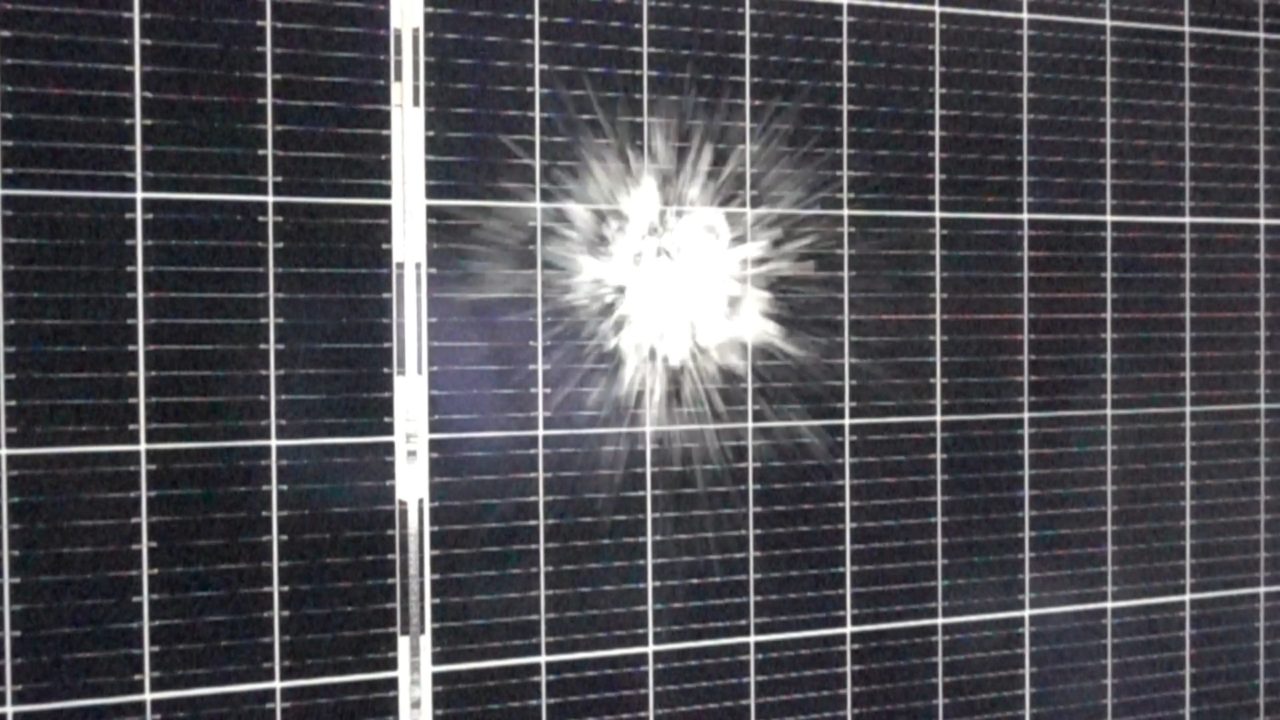 October 13, 2021
PV Evolution Labs (PVEL) has released a new hail test for its PV Module Product Qualification Programme (PQP) and has announced a move of headquarters to Napa, California that sees the independent test lab double its testing capacity.