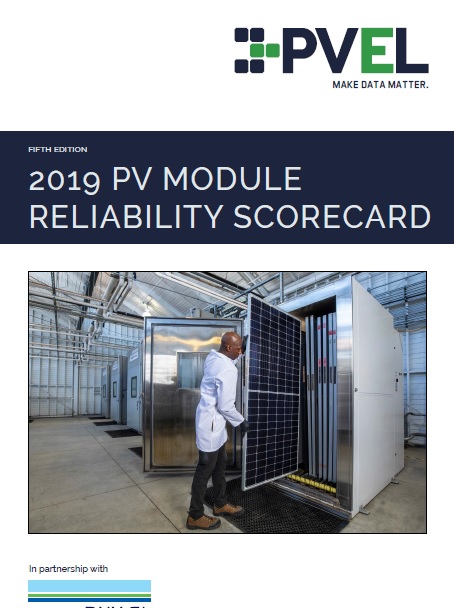 PVEL has also set the benchmark higher in certain tests, compared with previous years, which has made the ‘Top Performer’ status that bit harder to achieve.

The 2019 Scorecard also highlights that there were some measurable improved performance in some tests but the message was clear that in some areas, over 30% of the module Bills of Materials (BOMs) failed one or more test criteria.

“The solar industry is deploying new technology with little to no long-term field data that proves its reliable performance,” commented Tara Doyle, Chief Commercial Officer of PVEL. “As our latest Scorecard demonstrates, independent testing is vital to mitigate the possible risks posed by promising yet novel designs and materials – in fact, it is the only source of objective reliability and performance data.”

In PVEL’s thermal cycling tests, modules are placed in an environmental chamber where the temperature is lowered to -40°C, dwelled, then increased to 85°C and dwelled again. Maximum power current is applied to the modules while the temperature is increased and decreased. This is repeated 800 times for PVEL’s PQP (Product Quality Program).

One cycle takes about three hours to complete, while IEC 61215 testing requires only 200 cycles.

In PVEL’s damp heat tests, PV modules are placed in an environmental chamber and held at a constant temperature of 85°C and 85% relative humidity for 2,000 hours (about 84 days). The heat and moisture ingress stress the layers of the PV module. In comparison, IEC testing has a duration of only 1,000 hours.

There were five Top Performers in the 2019 damp heat tests, which included four modules from Adani, two from GCL-SI, one from JinkoSolar, three from LONGi Solar, two from Phono Solar and four from Vikram Solar.

Damp heat results from the 2018 Scorecard showed increased degradation compared to previous Scorecards. This trend continued in 2019 with a significant number of tested modules exhibiting greater than 4% degradation, according to PVEL.

Most of the module types demonstrating anomalous degradation were reported to have been made with PERC cells (both full-size and half-cut). PVEL said there was unexpectedly high degradation from select modules with PERC technology.

Despite improved performance in some areas, over 30% of the module Bills of Materials (BOMs) assessed for this year’s report failed one or more test criteria.

However, PVEL noted that this is not the case for all PERC-based modules as some Top Performers use that cell technology.

In the DML testing, PVEL installs a module according to the manufacturers’ recommended mounting configuration, then subjected to 1,000 cycles of alternating loading at 1,000 Pa. Next the module is placed in an environmental chamber and subjected to 50 thermal cycles (-40°C to 85°C) to cause microcrack propagation, then three sets of 10 humidity freeze cycles (85°C temperature and 85% relative humidity for 20 hours followed by a rapid decrease to -40°C) is used to stimulate potential corrosion.

The module is then characterized and inspected visually to evaluate the status of the module’s frame, edge seal and cell interconnections. The dynamic mechanical loading can induce microcracks that do not necessarily result in significant power loss, according to PVELS, yet  only after thermal cycling and humidity freeze testing that metal conductors affected by cell cracks can break, which leads to black inactive areas and increased power degradation.

The percentage of dynamic mechanical load sequence Top performers fell by 37%, versus historical results, according to PVEL.

PVEL noted that the extension of the humidity freeze cycles to 30, resulted in a wider range of degradation values across the 2019 sample set compared to the 2018 Scorecard results.

There were nine Top Performers in the 2019 dynamic mechanical load (DML) tests, which included two modules from Adani, two from Boviet Solar, two from GCL-SI, one from Q CELLS, one from JA Solar, two from LONGi Solar, one from REC Group, two from Silfab and two from Vikram Solar.

PID testing is carried out in an environmental chamber with voltage bias equal to the maximum system voltage rating of the module (-1000 V or -1500V) being applied under 85°C and 85% relative humidity for two cycles of 96 hours. These temperature, moisture, and voltage bias conditions allow PVEL to evaluate degradation related to increased leakage currents.

Results from the 2019 Scorecard showed 15 PV module manufacturers have PID under control, compared to 20 in the 2018 test report.

However, out of all the modules tested, a greater percentage (29%) of the group were Top Performers for PID in 2019, compared to 2018, although there was a smaller sample size of manufacturers and modules in the latest report.

According to PV Tech’s own analysis of historical PID testing from the Scorecard, notable was the inclusion of several companies not represented in previous year’s testing for PID (Vikram Solar, Phonosolar, Seraphim Solar and Boviet Solar). Also notable was Adani, which included two additional modules over the previous year that received Top Performer status in the 2019 report. 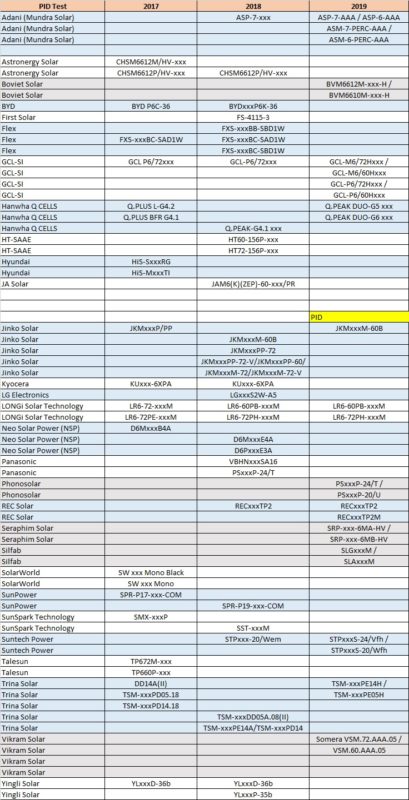 The standout PV manufacturer would seem to have been GCL-SI, which was the only company to achieve Top Performer status for two modules (GCL-P6/60Hxxx and GCL-P6/72Hxxx /) in each of the four testing regimes.

As a new entrant, Vietnam-based Boviet Solar also stood out amongst the crowd, achieving Top Performer status for its BVM6612M-xxx-H / and BVM6610M-xxx-H series modules in three of the four testing regimes.

Two India-based PV manufacturers, Adani and Vikram Solar did exceedingly well with a number of module series scoring Top Performerr in the tough damp heat tests and also had several modules gain the same status in several other categories.

“According to Wood Mackenzie and the Solar Energy Industries Association (SEIA), PV module prices have dropped by 25% in the last year alone,” commented Dana Olson, Solar Segment Leader of DNV GL. “Oversupply and regulatory uncertainty are intensifying the cost pressure PV manufacturers face. It is incumbent upon buyers to thoroughly vet the products they source or else face greater risk of economic underperformance down the road.”

The 2019 PV Module Reliability Scorecard is available as a free download at www.pvel.com/pv-scorecard.