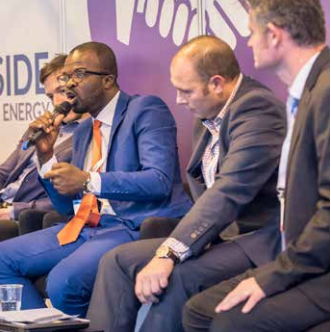 Subject to regulatory risks and financing issues, the potential for solar deployment in Sub Saharan Africa is exponential, with the rooftop sector set to explode, according to Solarcentury’s Daniel Davies and other panel experts at this year’s Solar Energy UK | Clean Energy Live show.

Firstly, tackling the “regulatory risk” in Sub Saharan Africa is pivotal to exploiting the continent’s massive potential for solar and other renewables. Whilst 1.3 billion people globally do not have access to electricity, half of those are located in Sub Saharan Africa. Among the issues with regulation, Chijoke Mama, founder of Nigeria-based energy firm Energydatar, identified “lack of skills, poor financing and poor data” as other key barriers to solar taking off.

Several countries are coming to terms with solar and seeing it as a viable solution compared to conventional diesel-powered solutions and kerosene lamps. Nigeria in particular instigated nationwide energy reform in June 2015 in regards to the country’s feed-in tariffs (FiTs). However, “regulatory ambiguities” are still a chronic problem in Sub Saharan Africa, within minimal government support established for solar as it is still often perceived as something new and expensive. “The key success factor for PV in Sub Saharan Africa is competing on LCOE,” said DuPont’s Stephan Padlewski. “The cost has to be minimised to make solar competitive.” He also added that thinking needs to shift to dollars per kilowatt-hour rather than dollar per Watt peak.

Davies argued a softer approach to regulatory risk should be promulgated; with the industry focusing on “sharing knowledge” rather than prescribing what should be in place. This approach entails “engaging with the process” and investing in training and development for local partners and establishing solar communities.

Hybrid systems, where solar PV is partnered with diesel generators, are popular in regions such as Sub Saharan Africa where many residents are located in remote communities without access to the main grid. Adding solar is both a cleaner and cost effective alternative to pure diesel, and also complements the variable nature of solar. Whilst diesel might be easy to acquire upfront, the operational costs are high. Therefore, there is a big gap in the market for hybrid solutions. However, challenges are still found in this solution, according to First Solar director John Eccles: “The economies of scale are challenged on smaller projects and hybrid systems are normally smaller projects, so project development costs are high and scale is small.”

Furthermore, investor comfort is another obstacle, as Sub Saharan Africa is an environment where the unit price of electricity differs for mini grids and grid-connected energy, creating an element of risk, explained Jan Cloin, project manager for the Africa Europe Renewable Energy Programme (RECP). In addition, there is a natural bias towards fossil fuels are they are the legacy choice for energy.

But as the global trend for PV costs declining permeates Africa, the panel agreed that solar will soon get to the point where even regulatory issues and a lack of financing won’t be able to hold it back. “Three years ago PV was seen as a competitor and everyone said it was expensive and unreliable,” said Eccles. “But now it is an unstoppable trend so the industry either needs to adopt the disruption or miss​ out.”