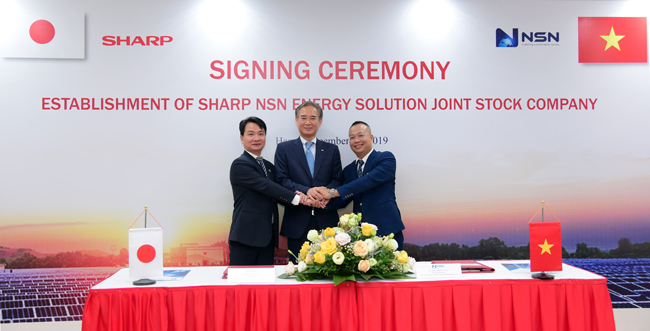 Sharp Energy Solutions has placed Vietnam’s solar market firmly in its crosshairs with the establishment of a new development JV.

Today Sharp Energy Solutions announced the signing of a joint venture agreement with local firm NSN Construction and Engineering. That deal will see Sharp take on 60% of outstanding shares in NSN Energy Solution, a renewables developer established by NSN in March this year.

That entity will rename itself as Sharp NSN Energy Solution and establish itself as an EPC targeting the flourishing Vietnamese solar market.

Sharp said the deal would reinforce its handling of solar construction in the country, building on its existing EPC presence while also strengthening its capabilities in the rooftop solar market.

Vietnam has been one of the must-watch solar markets of 2019 and recent estimates by WoodMac supposed that as much as 5.5GW could be brought forward by the end of the calendar year, cementing it atop Southeast Asia’s PV ranks.

There could be trouble ahead, however. Late last month it emerged that a second-round solar feed-in tariffs in the country could be cut short in favour of an auction model, with prime minister Nguyen Xuan Phuc taking issue with how his Ministry of Industry and Trade had handled the roll-out programme.

This could result in FiTs for future projects being withdrawn unless projects had already signed a power purchase agreement and can finish build-out next year.