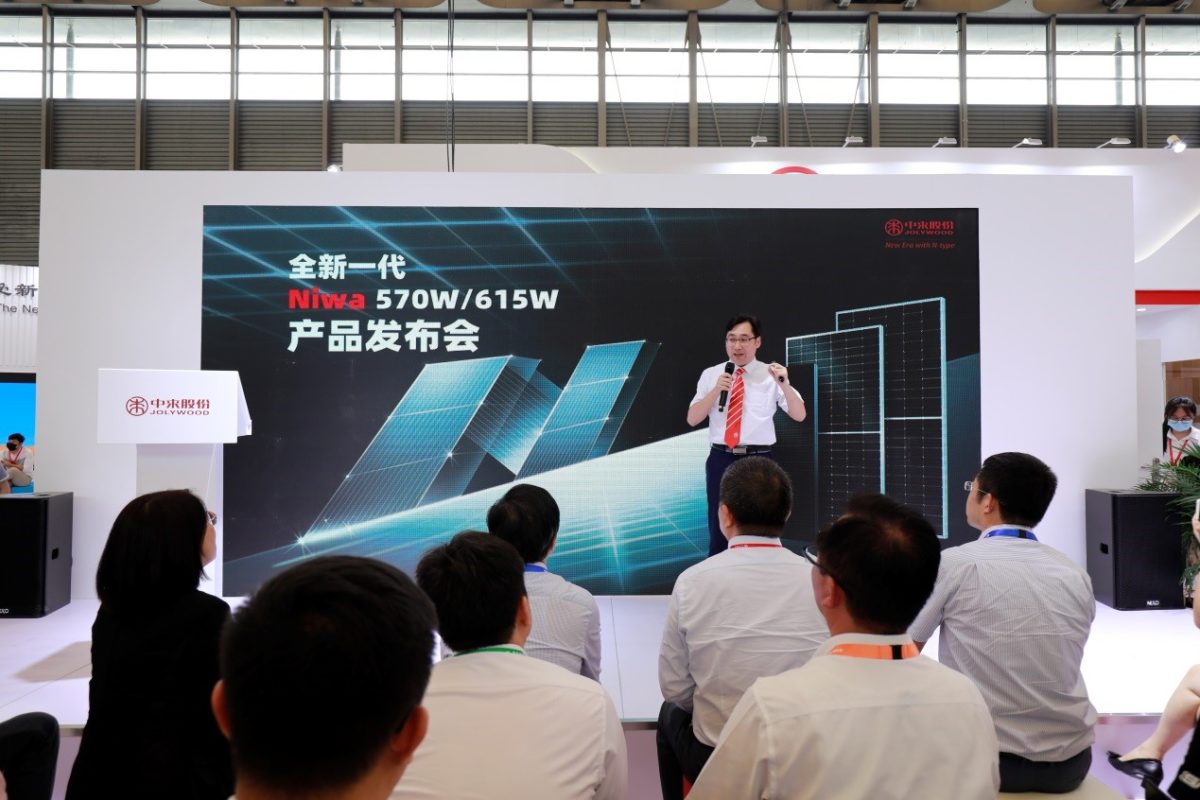 A round-up of product launches and other news stories from the show floor at the SNEC 2020 exhibition in Shanghai, China, featuring 600W+ panels, integrated storage solutions and decarbonisation commitments.

PV Tech's full write-up from SNEC 2020 will be published later this week.

The Niwa brand of module comes in both 570W and 615W versions, with the Niwa Super, Niwa Pro and Niwa Black all featuring at the trade show last weekend.

All three products use Jolywood’s latest generation NTOPCon cell technology and boast a module effiency of 22.1%.

Jolywood debuted the Niwa brand at last year’s SNEC exhibition, but took to the show floor this year to unveil its second generation products. Zhifeng Liu, deputy general manager at Jolywood, said the new generation had made “significant improvements” in both cell efficiency and module technology compared to last year’s version.

Sungrow said its range of products in the field allow for system capacities from 1MW to 6.9MW alongside LFP batteries rated at 1500V which can be assembled to produce an integrated system of up to 4.5MWh, which Sungrow said was suitable for both commercial and utility-scale installs.

The product is flexible for both DC- and AC-coupled designs and allows for the creation of all-in-one systems capable of providing services such as frequency regulation, peak shaving and ancillary services.

Sungrow said the future of solar in a post-grid-parity era was for the technology to be “deeply integrated” with energy storage for grid stability.

“The integration of PV and energy storage relies on deep analysis and integration of the whole system instead of a mechanical combination of two systems,“ Jack Gu, senior VP at Sungrow, said.

A host of solar companies used the SNEC exhibition to launch the RE100 China Initiative, tying in with major companies unveiling plans to derive 100% of their power from renewables.

LONGi Group, which is to source all of their power from renewables by 2028, launched the RE100 China Initiative alongside Sungrow Power, Envision, Chinese Renewable Energy Industries Association (CREIA), and PV Committee of China Green Supply Chain Alliance (ECOPV).

LONGi president Li Zhenguo said the launch of such programmes was intended to promote  the transition of China's energy sector to a “clean and low-carbon future” and help resolve climate change issues and global energy crisis.

It’s intended that with renewables manufacturers and trade associations setting such targets, they will set examples for other companies in China to follow.

JinkoSolar also unveiled its pledge to derive 100% of its power from renewables last week.

Yingli Solar said it had a “new starting point and new vision” for the company at SNEC 2020 as it signed a new of strategic partnerships at the event.

The partnerships are intended to see the parties collaborate on R&D in the materials and technologies fields, as well as in the development of new built assets.

Yingli also highlighted its N-type PANDA bifacial module at the event, which claims to have bifaciality coefficiency of 82% with a front-side power output of 425W, using TOPCON cell technology.