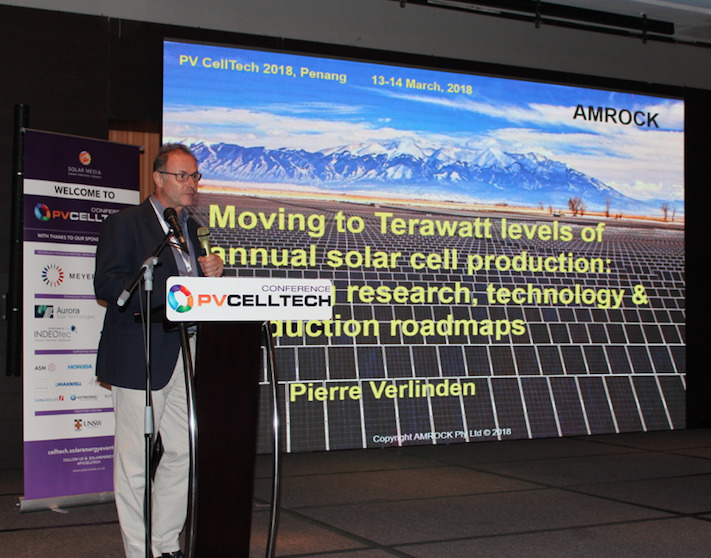 Having just reached the 100GW annual capacity level, the solar manufacturing industry must hit another 100GW within three years to meet demand, according to prominent industry figure Pierre Verlinden, who until recently was the long-standing chief scientist of 'Silicon Module Super League' (SMSL) member, Trina Solar.

Speaking at PV CellTech 2018 in Penang, Malaysia, Verlinden said that he disagreed with those believing there will soon be overcapacity of PV production, before he analysed what the industry would require to hit the multi-Terawatt level in the future.

He said that “remarkably” the industry had never seen negative growth, despite having ups and downs, and had grown by more than a factor 10 every decade or doubled every three years.

Verlinden added: “This has a consequence that we need to build a capacity of 100GW in the next three years and after that its 200GW, so it's very impressive, so the people who think that there will be a overcapacity of production very soon – I don't think that will happen.”

“There is 120GW installed in China. China needs 2.6TW of installed power capacity, which means that it will continue growing 50GW to 100GW per year.”

Describing the solar industry as having reached maturity, he noted that if the industry grows by another factor of 10 from current levels then it will be into the Terrawatt level.

He said that the largest solar installation at present stands at 1.6GW, noting that PV plants were now as big as nuclear or coal power plants. He suggested that 2GW will probably be the largest solar plant size as there is unlikely to be interest in having larger plants.

As it happens, the first 600MW phase of a 2GW solar park in the Indian state of Karnataka was recently inaugurated.

Verlinden posed the question of whether the overall industry is sustainable, starting with an analysis of energy sustainability.

He said: “The energy payback time of PV modules has decreased by two order of magnitudes over the last four years, which is amazing. So there is no question that the modules that have been produced will pay back their energy very quickly and so we could grow at a speed of 25% or even higher growth per year, so that's no problem.”

“The other question is financial stability. […] We see a lot of PV companies falling after big years because of too much debt and the industry doesn't generate a lot of cash.

“If we want to keep growing at 25%, not over the next 1-2-3 years, but over the next 20 years, then the cost of capex is critical and the localisation in China is key.”

In contrast, earlier in the day, Dr. D. N. Singh, CTO of Indian cell manufacturer, Indosolar, addressed the question of protectionism in the industry, claiming that a globalised manufacturing base would drive innovation and R&D and attract more minds to the sector. India, for example, is currently awaiting a decision regarding a recommended 70% Safeguard Duty on cells imported from China and Malaysia.

Verlinden also issued a warning that last year the PV sector had consumed 3,000 tonnes of silver – adding: “If we continue this way, in the next five years we will be the highest consumer of silver of all the different technologies – we need to find a solution to this problem.”