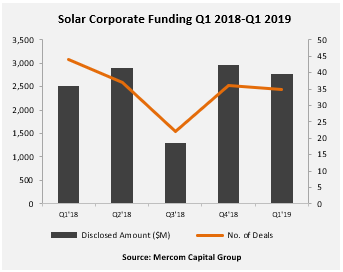 Fresh figures from Mercom Capital Group point at a bullish first 2019 quarter for the solar industry, with financing flows picking up pace compared to last year.

Across most corporate funding segments, a defining element of Q1 2019 is that deals became fewer but larger. Venture capital houses, for instance, poured US$176 million into 13 deals during the quarter, against US$161 million into 22 deals in Q1 2018.

Most of the VC inflows (US$111 million) ended up with downstream players, with upstream names – including Oxford PV, which raised US$41 million – securing the remainder.

For its part, Ginlong’s “rare” US$78.9 million IPO helped double public financing between Q1 2018 (US$103 million, four deals) and Q1 2019 (US$247 million, three deals). Meanwhile, debt financing saw a slight quarter-on-quarter raise (US$2.3 billion to US$2.35 billion), with downstream securing the greatest slice.

According to Mercom, the jump in funding announcements for large-scale projects was more pronounced, with volumes doubling to a “record high” of US$5.68 billion between Q1 2018 and Q1 2019 even as deals slightly dipped from 47 to 43.

See here for the full version of Mercom's report