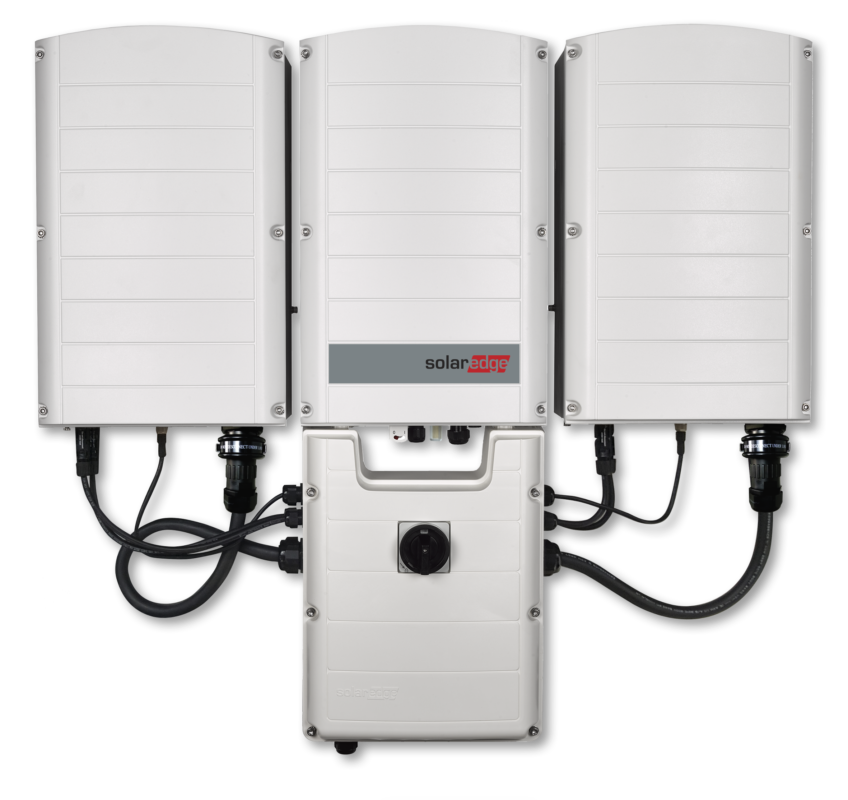 SolarEdge is shipping its most powerful inverter product to date– the SE100KUS inverter for 277/480Vac commercial grids. The SE100KUS utilizes a bundling concept with three separate units to retain higher system uptime and availability. SolarEdge will also be offering a 66.6kW (277/480Vac) and a 43.2kW (208Vac) inverters based on its synergy technology which combines bundling with compartmentalization, as well as a 30kW (277/480Vac) inverter based on the standard architecture.

Both central and string inverters have their own individual limitations and benefits. SolarEdge wanted to create an inverter that eliminated the drawbacks of both systems, yet provides the benefits of each. SolarEdge’s inverters with synergy technology enable PV systems to be designed and wired as if with a central inverter, but installed and serviced as if with string inverters.

The SE100KUS inverter can be installed by as few as two technicians, with no cranes, forklifts or other special tools, unlike the majority of large-capacity inverters, above 60kW, that require a crane or forklift or a multiple-person crew for installation. The separation of the units on the DC side in SolarEdge’s inverters with synergy technology means a forklift is not required for mounting. The inverter ships with all required cables and connectors and supports 9 separate DC string inputs and a single AC output. After onsite assembly, each unit maintains its functional integrity while bundling them together on the AC side for easy commissioning and less cabling. The individual units are managed and interact with the grid as a single inverter, while acting independently for DC-AC conversion. This allows for higher system uptime and decreased maintenance costs. If one unit fails, others function unimpeded. If a standard 120kW inverter fails, a large array suffers downtime. With synergy technology, the fault is isolated, and ≤66kW still generates. Installers can benefit from reduced Balance of System (BOS) and labour costs compared to multiple smaller string inverters.  The inverter ships with built in RS485 surge protection device.

The SE100KUS introduces the SolarEdge Inverter SetApp, a new, smartphone-enabled commissioning system. Installers can now commission and configure up to 32 inverters simultaneously (up to 3.2MWac) from a single main inverter using a smartphone app and a local WiFi connection (available via the App Store and Google Play). The inverter ships with the latest in code and compliance with out-of-the-box support for Rapid Shutdown (NEC 2017) and is UL1741 SA certified for CPUC Rule 21 grid compliance. The SE100KUS, SE66.6KUS, SE43.2KUS, SE30KUS, P800s, P800p are now all supported by the main commercial design software suites.