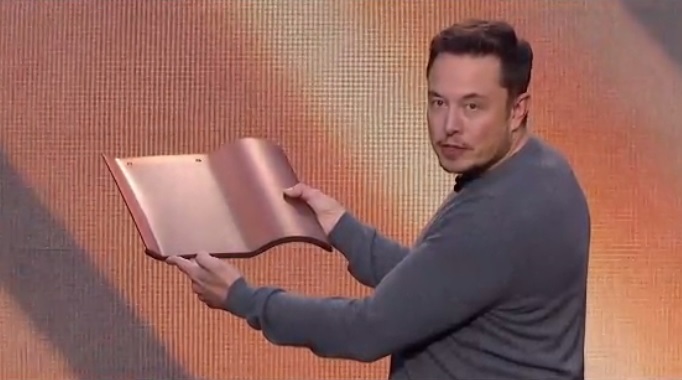 It was all very…Tesla. A showbiz product launch on the lot of a major TV and film studio, the set of Desperate Housewives not just the backdrop but the focus of the entire affair.

When the curtain dropped, the solar roof we were promised was not what was expected. Perhaps it should have been. The Hollywood touch for a black on black, 72-cell module recessed into the roof would have felt like overkill. Even for Tesla. The solution instead is one mono cell for one roof tile.

The glass is transparent from above and coloured from street level. It’s a simple trick and from the photography we have seen so far, it works a treat. No one can deny that compared to many BIPV alternatives, this is by far the most integrated. Beauty, as I often remind myself, is in the eye of the beholder. I’m not going to say this is the most aesthetically pleasing solar rooftop solution, but it is certainly the most aesthetically neutral.

The launch was impressive and Mr Musk will be hoping Tesla shareholders saw enough to make them back the takeover of SolarCity. They vote on 17 November. The share price dropped a little when the markets opened on Monday.

Here in the UK, the blue or black solar cells atop your roof was a badge of honour. The message of which was determined by the badge holder. To most, given the high feed-in tariff that drove the market, it was “look at me, I’m beating the utilities and making a [small] fortune”. For others it showed-off their green credentials.

If your efforts are literally invisible, valuable kudos is lost.

In the US market the financial bragging rights aren’t on offer. Residential solar is not really an investment product like it was in the early days in Europe. It’s about lower bills primarily. The green argument is unlikely to be persuasive these days with the keenest, greenest first adopters already signed up.

Where Tesla and SolarCity’s efforts could come up trumps is in the new build market. Invisible panels become only a bonus to would-be buyers. House builders lose one of the main reasons they might offer to overlook the addition of solar.

@middlepoltics @UNFCCC @nadhimzahawi @Tesla I think "normal" solar panels look cool, too. Beauty is in the eye of the beholder

In true Tesla style, details on the technical specifications of the tiles and the associated pricing is scant. The solar industry’s crowning achievement in the last decade has been achieving scale and getting the price of the electricity produced to a level where it is cost competitive. We can only assume that the Tesla solar roof is more expensive than an equivalent system based on mass-produced modules. No doubt there will be more details once Tesla is happy to share.

While the novel approach to rooftop PV is pleasing for tech watchers that are keen to applaud a glimpse of tomorrow, professional skeptics like myself have to ask what value this brings today. What is the LCOE? In how many markets is that price competitive? Will the banks that have underwritten SolarCity’s impressive rollout of installations be ready to offer the same competitively priced finance for what is essentially an unproven technology? Who can actually install these?

We don’t really know because while Tesla has the solutions, it is loath to provide answers.