The top-5 module suppliers to the PV industry shipped more than 20GW of modules during the first half of 2018, representing Y/Y growth of 10%.

The analysis, conducted in the past few weeks by the PV-Tech Market Research team reveals the scale to which a select group of module suppliers continues to move away from the chasing pack.

Several years ago, we defined the criteria for being in the Silicon Module Super League (SMSL) as having >4GW shipments annually. Several of the companies in the top-5 exceeded 4GW in the first six months of this year alone.

While the rankings we do at PV-Tech are generally taken as among the most credible today (especially in light of few companies reporting official data these days), the real questions is: what does this mean, having companies exceeding 4GW during 1H’18; and can this be sustained during the second half, given that the Chinese government has essentially spooked its domestic industry in what is now being referred to (in US terminology) as the ‘China 531’ moment-in-time.

This article presents my thoughts on these issues, while touching on China/non-China module supply dynamics in the second half of this year and through 2019. The full analysis is contained in the August 2018 release of the PV Manufacturing & Quarterly report, and will be discussed in full at the forthcoming PV ModuleTech 2018 event in Penang, Malaysia on 23-24 October 2018.

Let’s review the top-5 now. Heading the list in number one place was JinkoSolar, by some margin. The actual ranking of the top-5 is as follows: 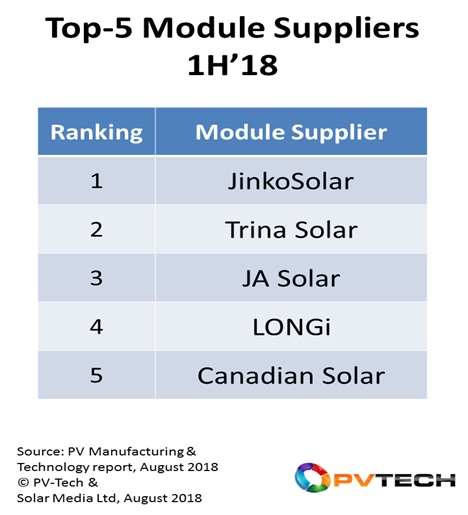 Regardless of any claims to globalization stimulating 1H’18 shipments by the top-5, what happened in China in the first six months (again!) was a key factor.

We have commented on JinkoSolar’s differentiated value-added in terms of non-China business operations on PV-Tech in the past couple of months, but it is now becoming clear that while the ‘China 531’ effect may have come as a surprise to most of the Chinese PV industry, there were probably a select group that foresaw this a couple of years ago, most notably the likes of JinkoSolar, Trina Solar and JA Solar.

Undertake any adjustment of China end-market consumption in 2H’18, or indeed 2019, and things change of course. Spook investors per China-531, and we have much more dramatic things to consider.

Top of the list here are the China-only cell/module guys, whose disappearance from the industry will be of almost zero consequence to the outside world (except for the impact of their parting-shot in fire-selling inventories, or coming back to life in 2-3 years only to meet the same fate, or offloading trucks of modules to India regardless of safeguard levels).

More interesting here however is what happens now outside China, not just for the five companies of this article, but the industry as a whole.

As normal as things have ever been in the PV industry, long-term drivers in terms of globalization in a post-subsidy environment would appear to have been restored. The fall out in China (mainly through a succession of postponed capacity investments) will rumble on for the rest of 2018, possibly grinding to a halt at year-end when stay-or-go decisions are taken by many Chinese domestic players of the past 3 years.

Expect a whole bunch of gung-ho capacity expansion plans out of China (covering the 2017/2018 period) to be conveniently brushed under the carpet on 1 January 2019. Even those clinging to false optimism during the Intersolar conferences of Europe/US, and stating that expansions will proceed no-come-what, will likely be left to eat humble pie and issue phrases like ‘currently reviewing timing schedules’.

As we noted before, this was inevitable and simply a matter of ‘when’, not ‘if’ as a 100GW industry does not need an extra 50GW overnight, come-what-may.

Investment reality aside, at this point, the focus for module supply is firmly non-China, with Chinese supply of modules being a secondary priority for those intent to be around globally going forward.
We are currently completing our analysis on what is potentially more relevant for the rest of 2018 and the whole of 2019: top-10 non-China-market module suppliers, including their technology mix and bankability. We expect to complete this piece of research within the next couple of weeks.

This topic is implicit across the two days at PV ModuleTech 2018 this year, and the global list of downstream stakeholders coming to this event in Penang in October backs this up completely.

Indeed, not simply the top-10 module suppliers (excluding China demand), but further, the top-10 serving the utility segment. This basically becomes the sub-set of players that will see continued growth, and are the contenders for module supply to large-scale or mega-solar deployment.

How much has technology differentiation helped the top-5 in 2018?

Digging behind the data for the first half of 2018 is actually revealing, in particular when looking at technology. The two issues (shipments and technology) are now inextricably linked.

Each of the top-5 has a slightly different technology-roadmap, ranging from exclusively-mono to mono/multi diversified, and bringing in the potential last-convert to the post-multi PV world of 2019 onwards (Canadian Solar).

While the technology positioning of LONGi is obvious to everyone in the industry, the shift of JinkoSolar from multi-biased (five years ago) to mono-dominant investments of the past 2 years has put JinkoSolar as potentially a global mono supplier that will do more to shift the buying habits of EPCs than any other company in 2019.

However, it is not LONGi that has been instrumental to moving utility solar over to mono. This prize surely goes to JA Solar. Back in 2016, when multi was all the vogue for utility solar (especially outside China), JA Solar was the one company that was pushing mono panels for utility in volume. Others are starting to copy JA Solar’s early push now (JinkoSolar and Trina Solar), as the product mix by 3 of the top-5 (JinkoSolar, Trina Solar, JA Solar) moves ever closer to mono-centric.

Indeed, while there are several factors in the mix, could it be that Canadian Solar’s stoic adherence to the multi-legacy and being almost the lone figure in forecasting a world in which multi kept mono at bay, has finally been shown to be out of touch with market reality?

Not only were third-party shipments from Canadian Solar well below company expectations in 1H’18, the company’s ASPs have been trending at double-digit percentage levels below the likes of JinkoSolar, Trina Solar and JA Solar. The short-term buffer of basement multi wafer prices (through GCL-Poly offloading inventories before impairment charges kick in) is only a tactical benefit, not a strategic goal.

We have been noting the market trends that would accelerate the transition from multi to mono, and China-531 provided just another nail in the coffin for multi. More on this early next week in a separate blog that will explain all, and hopefully finally put rest to the somewhat fake-news that continues to suggest that mono-vs-multi is actually a battle still to be won!

It is almost certain that Canadian Solar will now need to follow the technology path pioneered by JA Solar, then given a rocket booster by LONGi, and subsequently adopted rapidly by JinkoSolar and now Trina Solar (during 2018/1H’19).

Other module suppliers that occupy the lower rankings in the top-10 are also multi-heavy and these companies will be having daily meetings on what to do with existing capacity levels over the next 6-9 months.

The joy of being an EPC today

On the one hand, EPCs are seeing module performance and price levels that they had never expected to happen until at least 2020. While many will think this is all good-news, spare a thought for the project builders over the next 6 months that are potentially building sites whose yield levels could be 10-15% higher, if they made the correct risk assessment on higher performing products.

How appropriate then that the PV ModuleTech 2018 event on 23-24 October in Penang will offer them a 2-day crash-course in module-supplier/technology/quality selection for utility solar in 2019!

Details on how to attend the event can be found here.

26 August 2021
In this webinar, JA Solar will present its product portfolio based on the latest technologies to improve your PV projects, ensuring maximum reliability and performance. During the webinar we will receive insight from JA Solar about its solar technology roadmap and how the manufacturer is providing customers with innovative solutions to suit their needs, while we will also analyse how to determine the best product solution for each solar project.
c-si manufacturing, canadian solar, china, epc, gcl-poly, ja solar, jinko solar, longi solar, monocrystalline wafer, pv modules, pv moduletech, pv power plants, trina solar