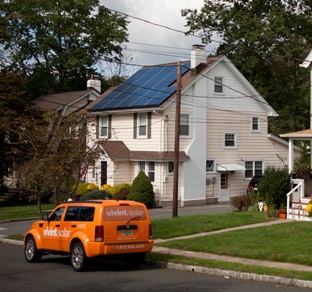 A round-up of recent developments in the US solar market, including news of Vivint Solar sealing US$300 million of tax equity commitments and Bank of America signing a solar PPA in Texas.

Vivint said the finance would help support the growth of its residential solar business, confirming the new money meant it now had committed financing capacity for around 185MW of residential deployment, equivalent to around 24,000 new customers.

Vivint said the two deals satisfied its tax equity financing needs well into next year, posing as the second step in a string of capital raising aimed at providing it with “increased financial flexibility and funding runway”.

“We appreciate the repeat business from our tax equity partners, with whose support we continue to expand our solar + battery storage offerings in markets across the nation. As we have in the past, we continue to emphasize installation and operational excellence to provide our capital partners a reliable investment, and our customers a best-in-class solar energy service,” Thomas Plagemann, chief commercial officer and head of capital markets at Vivint Solar, said.

29 June 2020: Bank of America has entered into a 10-year structured agreement to procure solar power in Texas.

The bank has partnered with Reliant, a division of NRG Energy, to purchase 100% of the renewable power generated by utility-scale solar projects in the Lone Star State, equivalent to around 160,000MWh.

The agreement is to support a single project to be located in west central Texas that is slated to come into operation in mid-2022. Until that array comes online however, Bank of America’s Texas-based facilities will receive power and associated Green-e certified renewable energy certificates from other projects contracted by NRG.

“Supporting utility-scale solar energy projects like this builds on our commitment to responsible growth and reduces our operational impact on the environment,” Andrew Plepler, global head of environmental, social and governance at Bank of America, said.

US Solar Fund recruits renewables investment veteran to board

30 June 2020: Renewables investor US Solar Fund has appointed Thomas Plagemann to its board as an independent non-executive director.

Plagemann is currently chief commercial officer and head of capital markets at residential solar major Vivint Solar and sits on the board of the US’ Solar Energy Industries Association, whilst chairing the trade body’s state policy committee.

He’ll bring 25 years of experience in capital markets and renewable energy investment, having also served at Santander and First Solar.

“Thomas’ career-long experience in energy financing will be hugely valuable to the Board and US Solar Fund as we develop our portfolio of long-term solar assets in the US,” Gill Nott, chair of US Solar Fund, said.

29 June 2020: Independent power producer Idemitsu Renewables has closed financing on a 50MWp solar farm to be located in California.

The Central 40 project, based in Stanislaus County, will sell power through a PPA to local utility Silicon Valley Power, expanding on Idemitsu’s business in the state.

“We were happy to build upon our existing relationship with KeyBank and to close a successful transaction even amidst the difficulty of the current COVID environment,” Cary Vandenberg, managing director at Idemitsu Renewables, said.

The array, located in Mitchell County, GA, is one of a number of projects completed under Georgia Power’s Renewable Energy Development Initiative (REDI), which was launched to stimulate renewables developments in the state.

Global Atlantic Financial Group owns the asset, while Origis Energy retains responsibility for operating maintaining the facility. Power generated at the site will be sold to Georgia Power through the REDI programme.

Construction on a separate facility also supported by REDI, based in Camilla, GA, began in June last year but is yet to complete.

26 June 2020: Construction has started at Logansport, Indiana’s first ever solar farm, a 16Wac project in the city.

Inovateus Solar is developing the install for the local Logansport Municipal Utility, replacing a coal-fired power plant that was recently retired after more than 120 years in service.

It is supported by a 30-year power purchase agreement, financed by Alchemy Renewable Energy, which will enable the utility to procure all power generated from the site at a fixed rate per-kilowatt hour.