“Yellowing” of PV modules is defined as the optical degradation of the ethyl vinyl acetate (EVA) where the clear encapsulant becomes visibly yellow or even brown. Here we review test results on yellowing and power loss – and specifically whether yellowing only affects a module’s appearance or whether it affects its electrical performance as well – and comment on how market trends underline the need for encapsulant durability. 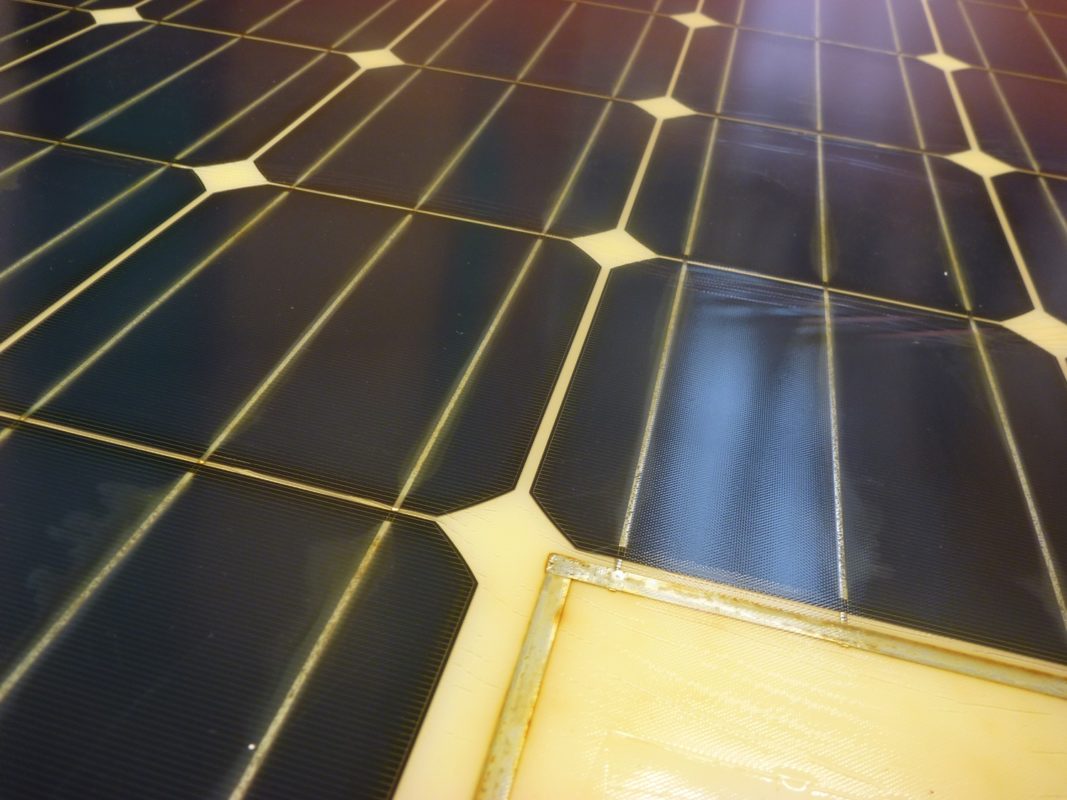 The characteristics of an ideal encapsulant are listed in Table 1. EVA accounts for 90% of the solar encapsulant market, and is predicted to maintain 60% market share over the next 10 years [1]. As EVA degrades and yellows, it goes through a chemical reaction where acetic acid is produced, the UV absorber additives break down and the gel content (percentage of cross-linked polymers) increases. The formation of acetic acid is found to be the predominant factor causing yellow discoloration [2,3]. Studies have been conducted by Fraunhofer and other R&D labs on solar modules with EVA encapsulant which have shown yellowing. While these studies analyse possible explanations of the yellowing in detail, this blog focuses on how the yellowing affects the power output of the module.

One study [3] conducted in the early 1990s on modules collected from a solar array in California showed a reduction of 9-50% in the efficiency of the modules, depending on the amount of yellowing. Another study on the same solar array showed that EVA discoloration was just an aesthethic issue and it was hot spots (multiple hot soldering joints) that led to power degradation [4]. The acetic acid released during the chemical reaction that lead to yellowing may cause corrosion in the solar panel, but is argued to be an unlikely mechanism for power loss in a yellow solar panel.

Figure 1 shows the reduction in transmission as EVA is exposed to UV light, in Fraunhofer’s Atlas 4000 Weather-Ometer, before and after accelerated aging for 120 days. The reduction is most noticeable between the wavelengths of 350-950nm. In Figure 2, the quantum efficiency (the number of electrons output by the solar cell compared to the number of photons incident on the device) is plotted against the wavelength range that the EVA is subjected to. Figure 2 shows that the quantum efficiency decreases in samples 3 and 4 (yellow-brown EVA solar panel samples) for wavelength between 350-650 nm. Figures 1 and 2 have similar results in loss of transmission after UV exposure, even with a newer formula of EVA used in the samples tested in Figure 1.

In Figure 3, the spectral response of three silicon solar cells are plotted against wavelength. The three cells were manufactured in different years and the graph shows that the solar cells with higher efficiency have higher spectral response at lower wavelengths. In reviewing all three figures, it is apparent that if solar cell effieciencies increased at lower wavelengths there could be increased power losses due to yellowing. Yellowing may be an aesthetic issue at this time, but as technology advances in solar cells there needs to be development in EVA materials as well.

Fraunhofer CSE has contributed to these studies by working with the National Renewable Energy Laboratory (NREL) to standardise accelerated ageing of EVA. They have been conducting UV weathering tests on EVA samples provided by NREL. The testing was conducted as a part of NREL’s PVQAT 5 (PV Quality Assurance Testing), to assess the standard test procedure for UV exposure and data collection. The supplied samples were weathered and then transmission data was collected from a spectrophotometer at increasing increments of UV exposure. Figure 1 is an example of data that was collected during the PVQAT testing. Testing was conducted using an Atlas 4000 Weather-Ometer and a Perkin Elmer Lambda 950 UV/VIS spectrophotometer These collaborative efforts are aiding in data collection about accelerated aging and the correlation to ageing in the field.

Since EVA is a major cost component of solar panels, cheaper and less durable EVA is sometimes used to reduce costs. However the backsheet and encapsulant components act as protective barriers that can affect the module’s durability, and substitutions of lower quality EVA material may reduce the lifetime of the module due to EVA yellowing and consequent power loss.