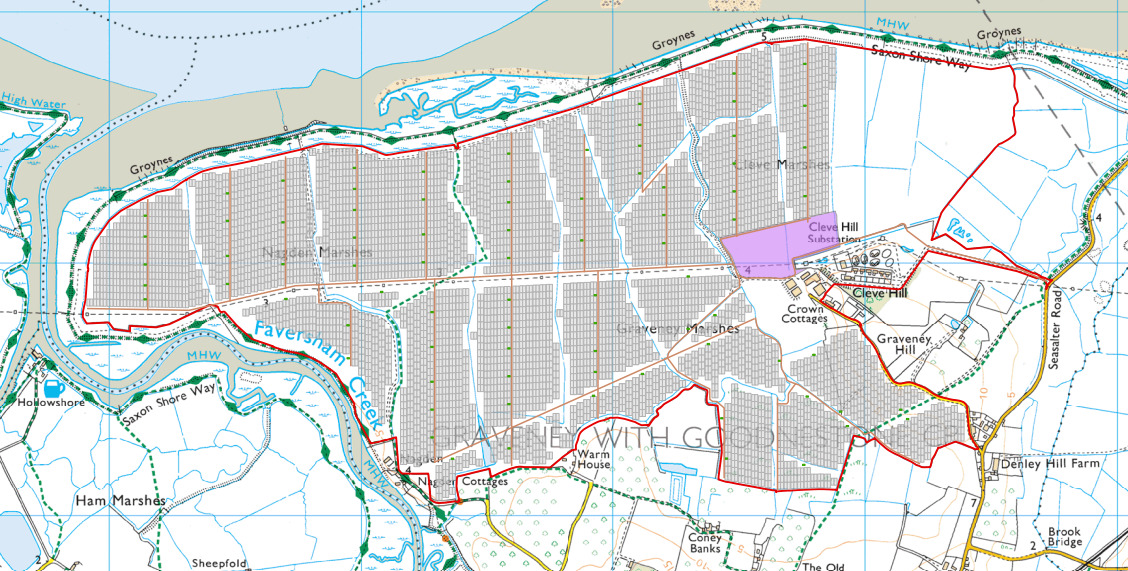 The UK government has green lit what stands to be the country’s largest solar farm, a 350MW project by the south east coast.

Cleve Hill – as the site has been dubbed – will incorporate some 880,000 solar panels, giving it a total generating capacity of around 350MW. The PV element will be combined with a significant energy storage system, which PV Tech sister publication Energy-Storage.news understands to be around 350MW/700MWh in size.

It is understood that no technology providers have yet been selected for the project. However, planning documents show the solar element of the site will be laid out in an east – west orientation.

The project will be brought forward by a joint venture between UK developer Hive Energy and Wirsol, with an attached development value of £450 million (US$554 million).

Once complete, the project will comfortably be the UK’s largest operational solar and storage facility. Sister publication Solar Power Portal has been tracking its progress since its inception in 2017, and a more detailed history of the site’s progress can be found here.

Due to its size, the project has been designated a nationally significant infrastructure project and, as a result, has had to navigate the complex Planning Inspectorate route to receiving the planning green light. This requires the country’s energy secretary to provide the project with final approval, which was decided yesterday.

Giles Redpath, chief executive at Hive Energy, stressed the importance of collaborating with numerous stakeholders and the local community – opposition to the project has been significant – to design a project that can deliver a “significant amount of renewable, affordable and secure energy generation”.

“We are proud to lead the way, together with our partners at Wirsol, to deliver the UKs largest solar park. Due to be operational by 2022, the Cleve Hill Solar Park offers a real solution to our urgent climate needs and showcases the potential for the UK to lead the green recovery,” Redpath added.

While there are obviously larger solar PV facilities in the world and even across Europe, Cleve Hill’s approval is a significant landmark for the UK’s solar sector. The country’s Renewables Obligation scheme established the country as a prime destination for solar investment and that has laid the foundations for its emergence as one of Europe’s subsidy-free frontrunners.

That a solar-plus-storage facility of this scale has been able to shrug off some fairly vocal opposition and secure governmental approval is too a promising sign. The UK has made great strides towards decarbonisation but still has some way to go ahead of a crucial piece of legislation, expected any week now, which will set out the future of energy policy in the country.

There are still numerous obstacles to surpass before the site begins generating power, of course. The project’s financing has yet to be determined, and the technology choices – particularly around the battery storage element – will be of real interest.

Whether this site kicks off a rush of super-large-scale solar sites in the UK and beyond remains to be seen, but it certainly ushers in a new era for solar in the UK.