7GW outside solar parks: A chance for ‘classic’ Indian developers

India’s large-scale solar space, which has been dominated by Solar Parks in the last two years, now has standalone projects firmly back on the map with multi-Gigawatts of capacity up for grabs.

Earlier this year, Solar Energy Corporation of India (SECI) and NTPC issued tenders amounting to 7GW of PV capacity to be set up anywhere in India, but also to be connected to the Interstate Transmission System (ISTS).

While such developments would bring back many of the traditional project development problems that had been alleviated by the solar park set up, such as land acquisition and setting up transmission infrastructure, the new capacity could be seen as an opportunity for higher-risk taking, often private equity-backed developers, the ‘classic’ players who led the way in standalone PV project development before the government kicked off its initial 20GW solar park scheme.

At the time of writing, India had more than 11.7GW of tenders stuck in the pipeline, primarily due to uncertainty over the looming safeguard duty threat, but this week, the Ministry of New and Renewable Energy (MNRE) clarified its competitive procurement guidelines for large-scale solar, noting that any change in tax, duty or cess that affects a PV project would count as a ‘Change in Law’ and the developer should be compensated. However, analysts have said short-term uncertainty prevails and it remains to be seen whether the clarification will kick-start a regular auctioning process again, including these ISTS tenders.

New bidders on the block

Sujoy Ghosh, country head, India, for US-based thin-film PV manufacturer and project developer First Solar, a top-three module supplier to India in 2017, told PV Tech that before solar parks, active players tended to develop assets and de-risk them with the eventual goal to sell them to a financial investor that was less willing to take the upfront risk.

However, when the solar park programme proliferated, Ghosh said the industry saw a “very different class of developers” coming in, often with a lower cost of capital on the equity side. Many were utility companies who traditionally wouldn't get into land acquisition and project development simply because they were risk averse.

International heavyweights such as Fortum, Softbank, EDF, Engie and Tata Power on the Indian side, suddenly became active in the Solar Parks, where the government solved the big problem of land buying, while also offering scale.

Vinay Rustagi, managing director of consultancy firm Bridge to India, said most of the large international developers are very reluctant to buy large pieces of land because the process is very “time consuming and messy”. They also find it challenging to deal with hundreds of individual landowners and to complete land acquisition within very tight deadlines.

He added: “That is why many of them particularly the national level utilities – companies like EDF, Engie, Sembcorp – they find it much easier to stick to solar parks.”

Describing the arrival of these new developers, Ghosh said: “That saw the tariffs plummet because the people who are working with lower cost of equity capital – these were companies who need not recycle the money as quickly as somebody like us, and so our focus then remained on the non-solar parks.”

He added: “In a non-solar park like the state programmes, you still had to go through traditional permitting and land aggregation process for which we had the organisation here.”

Developers looking outside solar parks would carefully consider which states to then prioritise for standalone projects, taking note of off-taker risks from the state distribution companies (Discoms), how to buy land, and understanding the grid, among other risk factors. They would then narrow their focus into select geographies.

Shift back to standalone projects 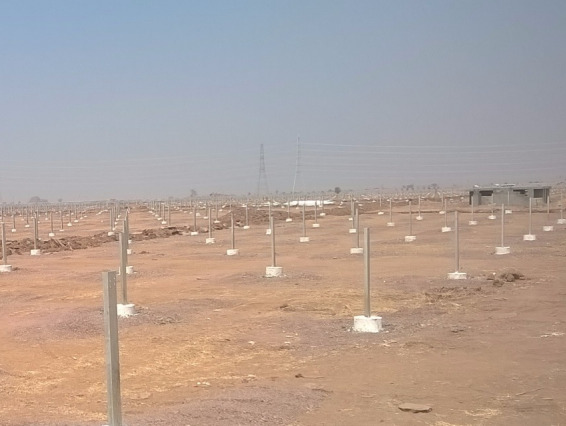 While the government’s Solar Park’s programme now has 40GW earmarked, the speed at which it can find land and prepare the infrastructure has fallen behind MNRE’s highly-accelerated tendering programme. Announced in December last year, the country had targeted more than 17GW of tenders by the end of March this year, and 77GW in less than three years.

Pressure to release more tenders would certainly have impacted SECI and NTPC’s decision not just to continue the solar park scheme, but also to put the emphasis back on standalone projects with the 7GW of issuances. However, there are various other benefits to the ISTS-connections, described later in this article.

Discussing the ISTS opportunities, Ghosh said: “[It’s] back to the good old days where you are saying: ‘You connect your energy to the grid. You do all the land, all the interconnect and we’ll buy the power at that point’. Now that brings in a very different complexity to this whole business because solar parks were essentially created to de-risk development and so it’s going to be interesting to see what happens on these ISTS bids.

“You might see again the classic developers – more high-risk kind of people – coming back to the market and creating more value by getting all the land permitting done.”

Concurring with this theory, Rustagi said: “These are very large projects of 250MW. That means you have to buy more than 1,000 acres of land, which is extremely challenging in any part of India for anybody – so for international developers that remains according to us a strict no-no, with some exceptions like Softbank.

“It is a fantastic opportunity for the Indian developers who are typically of a much greater risk appetite and also very strong local level understanding of how their local processes work. They are operationally and financially much more flexible so I think for them this is a good opportunity to win large capacity and compete with some of the bigger international players.”

He cited the likes of Avaada, Azure, Acme, ReNew Power and Hero as likely candidates, among others.

However, PV Tech also spoke to an in-house legal representative of one of the heavyweight international developers that entered the Indian market once the National Solar Mission really started to roll. He said that while his company had traditionally been focused purely on solar parks, enjoying the plug-and-play setup, the ISTS tenders opened up a range of possibilities that could entice it to take part.

Through experience across India, like First Solar, the company has gathered together a list of states that are sympathetic and understanding of all the development risks associated with the country. The ISTS setup, therefore, allows such players to focus on the most cooperative states in which they feel comfortable and then export that energy produced – via SECI as the interim off-taker – to other states needing the power.

The legal representative also listed a number of factors that make the ISTS tenders a win-win for the whole country. For example, northeast states, which may not have suitable land to set up solar, could now procure solar via the ISTS, to meet their Renewable Purchase Obligations (RPOs). It means developers can focus on states with the most barren lands and provide jobs, while producing electricity to be consumed by those states that have mostly fertile agricultural land.

The representative said: “It is a win-win situation to the investor, states, Discoms, and people. It’s like this is actually solving four problems at one shot.”

Noting that his firm is primarily looking closely at the strength of project documents before it takes part in any ISTS tender, he also detailed the four absolutely critical elements in the PPA that would be essential:

Ultimately, he said that his firm is looking for opportunities in the states of Andhra Pradesh, Karnataka, Maharashtra, Madhya Pradesh, Gujarat and Rajasthan.

Manu Srivasatava, principal secretary, New and Renewable Energy Department, of the government of Madhya Pradesh, said that it is far easier for the government to procure land, for when encountering private developers there’s a tendency for landowners to put up the rates.

He agreed that the ISTS projects offered a chance for more private equity-backed developers to jump in, noting that one pension fund-backed developer, which won capacity in the Rewa Solar Park – situated in Madhya Pradesh – had said it would not attempt to develop in a non-solar park.

Another main challenge for project development will lie around grid-connection and transmission bottlenecks, according to Mudit Jain, a consultant at Bridge to India. Developers will have to find suitable project sites that are close to Central Transmission Utility (CTU) substations, which connect to the ISTS, with available capacity to evacuate more power. The other option is to approach Power Grid for extension of transmission infrastructure, which has a gestation period of 12-18 months.

Jain added: “Developers who have done the groundwork for finding a site where the existing CTU substation has spare transmission capacity will find it easier to compete in this bid. As the commissioning timeline is 15 months from the date of PPA signing, the developer will have to move very swiftly to complete the groundwork.”

C.Narasimhan, president of the Indian Solar Association and chairman of Raasi Group, said the government should come forward to identify the barren lands available across the country and then offer that information as a data sheet to developers. Moreover, the government should help provide proper gird connectivity through the Green Energy Corridors.

However, some media reports have suggested that the green corridors are seriously lacking in funding at present.

Narasimhan added: “If a developer goes to the private lands their land purchase will take a lot of time, so we have to make a lot of reforms in the land procurement and availability and the grid support – then only the areas other than the parks can be supported for the solar projects.”

He also suggested there needs to be a way to speed up the deemed conversion of barren land into industrial land.

Clearly, traditional challenges will come back to the fore with these 7GW of ISTS projects. Ultimately, only once the auctions take place will we see what kind of developer is willing to grab the opportunity.

There have been several analytical reports showing that solar park costs can often be more expensive than standalone projects so again the tariff discoveries will be interesting, if not blurred by any remaining uncertainty on the tax and duty side.