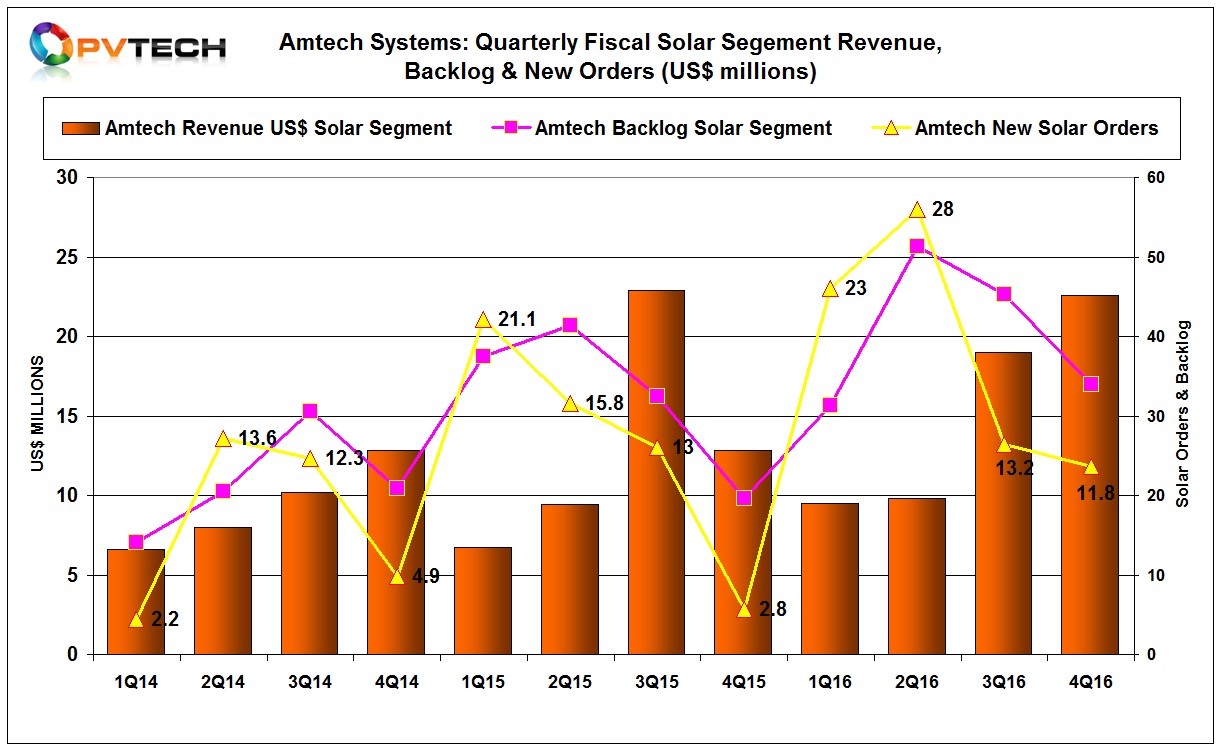 Amtech reported fiscal fourth quarter Solar segment sales of US$22.6 million, up from US$19 million in the previous quarter.

Solar segment new orders totalled US$11.8 million, down from US$13.2 million in the previous quarter, expected to be due to the sudden slow down in calendar year third quarter new capacity expansion announcements triggered by a major slowdown in Chinese end market demand and fears of overcapacity.

Fokko Pentinga, Chief Executive Officer of Amtech, commented, “We are seeing a high level of interest in our newly introduced next generation technology solutions.  There has been strong quoting activity throughout this past year which is translating to bookings including those for our new high throughput PECVD and ALD systems.  We shipped our first combined PECVD and ALD PERC solution to a top-tier customer in November 2016. The market is showing interest in selective capacity expansion needs, line upgrades, and high-efficiency technology adaptation to ensure competitiveness and long-term profitable growth.”

The company reported gross margin of 29%, level with the previous quarter, while gross margins were higher in its Semiconductor segment, compared to Solar segment margins that were impacted by higher revenue deferrals. Order backlog includes deferred revenue and orders that are expected to ship within the next 12 months.

Amtech said that it expected total revenue in the next quarter to be in the range of US$25 to US$27 million and total gross margin to be in the mid 20s percent range.

11 October 2022
PV CellTech Extra will be held as a series of live webinars and on-demand sessions on 11-13 October 2022. We'll be taking a slightly further forward-looking view at the technologies and roadmaps for new cell architectures set to dominate mass production during 2023-2025 with special emphasis on the potential timelines for technologies beyond the single-junction cell design, including perovskite and hybrid concepts.
ald, amtech systems, c-si manufacturing, pecvd, solar cell